What's All the Fuss? 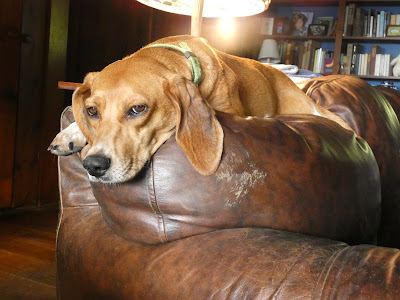 After being gone since Saturday afternoon, after I had alerted friends and neighbors, after I'd spent two restless nights listening out for her and thinking of all the things that could happen to a little dog in the woods --tree fall, copperhead, bear, bobcat, cave-in-- after I'd told John that I'd pretty much given up hope, after all this and more, Jenny waltzed in the front door yesterday around 1o in the morning.

She was just fine. A little hungry but then she always is. Some ticks on her but then there always are.

And how happy I am to have her back--with thanks to all who were concerned.

One concerned FB friend told me about a beagle she once had that went missing for two weeks before returning on her own and said that Jenny might well do the same. "From your lips to God's ears," I told her, feeling just a little less forlorn. And maybe 15 minutes later, I heard Jenny at the front door.

Jenny's return was the one good thing about a sad July 4. I cried when I read your post yesterday. So incredibly happy that she's okay... although I know she's going to do this to you again!

A hound just wants to be free. I let5 her out at 6 this morning and she was back in 10 minutes to hop up on the bed. Later, she spent some time with John, getting scratches. Out again, nosing around the yard . . .

I was so happy to see your post that she was back. We were all worrying about her.

I was touched by all the folks who expressed concern and then relief. The online community is real.

Only just saw this. I'm so glad Jenny returned safe. My puppy is also called Jenny. So far she has not been off the lead at all when we go out for a walk. She is only 16 weeks and there are so many dangers where I live - cars, people stealing dogs, other dogs not trained or unpredictable. I think your Jenny is very lucky to live with you and in your neighbourhood. Perhaps it is safer? or maybe not. How old is she?

Completely understandable for your circumstances, Star. Our Jenny is about two--and seems to confine her rambles to the woods. The paved road is a half mile down the mountain and has little traffic. I don't think she goes down there at all. She is very skittish around strangers, so I worry less about her getting dognapped than I do about a wildlife encounter--and I think she'd be most likely to run away. All in all, her joy at running free is worth the risk and the worry. Just as with kids--at some point you have to let them out in the world.

Ah! I do believe I remember when you got Jenny. If I'm right, you made a post about how the other dogs welcomed her and got used to her.