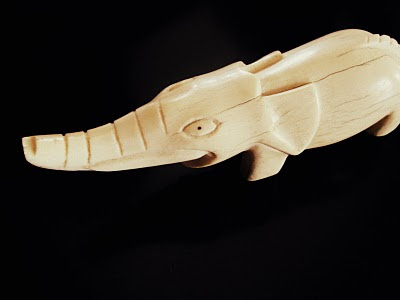 Back in 2010 there was an ongoing series in the blogosphere called Magpie Tales, the brainchild of Tess Kincaid and her blog Willow Manor. A photo prompt (above) would be given, and any number of folks would respond with prose or poetry. I had way too much fun with these and, as it happens, I'll be offering a class beginning next month through Great Smokies Writing Program, doing much the same thing. (For information, go HERE.) The following example shows how much fun a writer can have, just being silly.

Ceiling fans stirred the sullen heat of a Kenyan midday, setting a-whirl golden motes of the inescapable African dust. It rose in a shimmering haze and then settled back on the heads and shoulders of the three men gathered on the veranda of the Colonial Club. Humming insects and the barking of baboons in the bush vied with the Victrola's tinny jangle -- the Quintet of the Hot Club of Paris. Unnoticed, the hot animal smell of the jungle prowled and sniffed at the edge of the clearing

A silent native attendant in crisp white garments brought yet another round of gin and tonics to the men engrossed in examining the curious ivory carving that Nigel Cholmondelay, fourth Baron Delamere, had just produced from the capacious pocket of his dusty jodhpurs.

"Ever seen one of these, you chaps?" he asked, setting the little thing in the center of the round table.

Dickie Pembrocke screwed in his monocle and leaned over for a closer look. "It's a bloody elephant -- Of course, we've all seen elephants!  What are you playin' at-"

"Steady on, Dickie, old boy."  The third man laid a restraining hand on his irascible neighbor. "I think what Delamere is asking pertains to the function, rather than the form, of this object.  Am I correct?"

The taciturn fourth baron nodded and quaffed the rest of his drink.  The native attendant silently materialized with another round.

"Mtu huyu atalipia kila kitu,"* said the third man to the native, pointing to the baron.

"Yes, Bwana. As you wish." The native grinned at the noted white hunter, a man known to be as at home in the savannahs and forests of East Africa as the natives who had given him the name Bwana Nguruwe for his great strength and messy eating habits.

Reaching for the strangely elongated carved elephant, the white hunter ran a reflective finger along the upraised trunk.  "Where did you come by this, Delamere? If I'm not mistaken, it's one of only three in the world -- used in the traditional wedding rituals of the Samburu tribe."

Shaking his head very slightly, the white hunter set the thing back on the table and drained his glass. "Bad show, Delamere.  Old Ijumaa, a witch doctor up near Lake Naivasha, swore that Kubwa Tembo, the king of all the elephants, would track down anyone who dared to steal the sacred-"
"I say, what's that beastly sound?" Dickie Pembroke's monocle fell from his eye and shattered on the table. Beneath the tan, his foolish, rabbity face was deathly pale.
An angry trumpeting rang out in the clearing around the club house and heavy footfalls thundered toward the veranda where the three white men sat beneath the slowly turning fan.

The golden dust of Africa danced in the air. 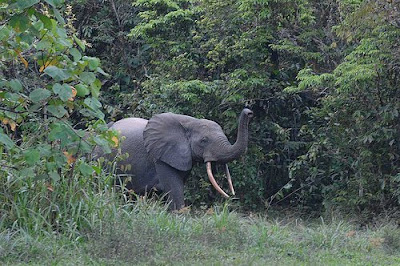 Oh what fun...especially the last quote in Swahili! You continue to be a top-notch author, coming up with great stories and telling them in a detailed way that just makes me want to read more!

That, Vicki, was priceless! Thank you for the story -- and for the laugh.

You have such incredible talent. I looked over your course description and though it looks like fun, I have little experience writing like that. Look forard to more of your writing.