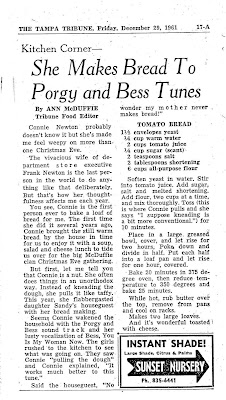 When a friend of mine from high school days posted this on Facebook, I was intrigued. And since I had a half a bottle of Bloody Mary mix left over from Christmas, I decided this would be a good thing to do with it. (I'm quite fond of Bloodies as a midday drink but to partake of same other than on a holiday seems wrong. Like eggnog in July.) 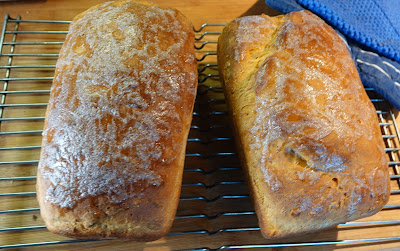 So, Bloody mix (Mr. and Mrs. T Original) instead of tomato juice and a good bit of oregano stirred into the dough which I kneaded rather than pulled. I did venture a bar or two of "My mama done tole me," but I can't carry a tune and don't know all the words. Still, the altered recipe produced a tasty bread, mildly reminiscent of pizza. 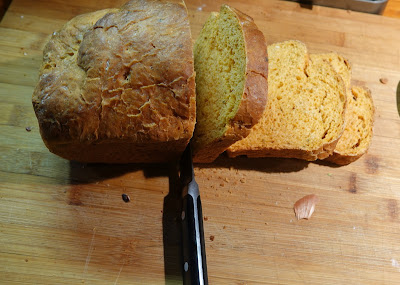 It slices beautifully and makes nice toast. We had it for supper with Cream of Spinach and Onion soup, along with a salad. 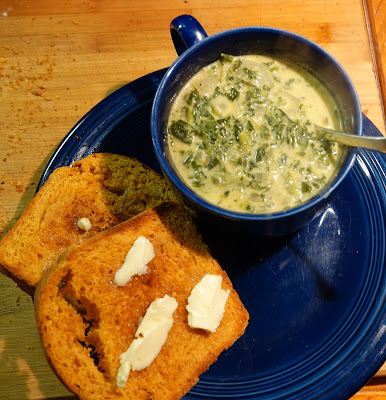 And I used a slice the next morning for Egg in a Hole.
Thanks, Sandy N.! I think your mother would approve. 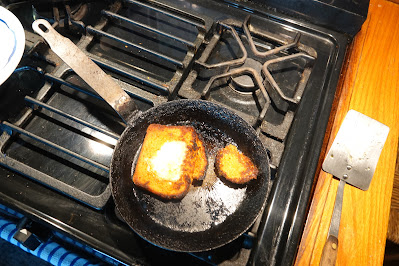 My takeaway from this is egg in the hole. I had forgotten all about it.

Egg in a hole! I had forgotten this too. Jerry used to make it for himself. I don't like eggs, so I passed.

Glad to hear from you again, missed your blog yesterday. That bread does sound wonderful. How cleaver...some of the recipes of the 60s can just be forgotten, but this is a winner.

I love egg in the hole but Dan doesn't so some days when all he wants is cereal I make it for myself. I think I"ll pass on making the bread.

Egg in a hole! When I was a kid, we called it "elephant eye." (Which makes me wonder how I could work up nerve to eat it!) But that's what we called it. And it was so good. For some reason it tasted better than a fried egg beside a piece of toast. :-)

You are my idol