The Wild Life -- Outside My Window 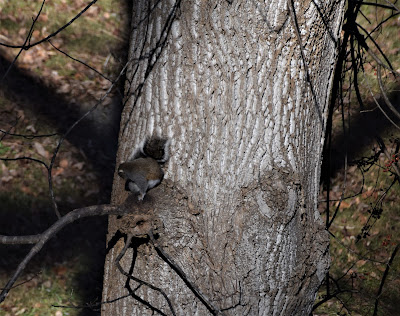 From the bedroom window I watched these little critters scurrying around and finally saw one going in the very convenient hole in a big poplar. 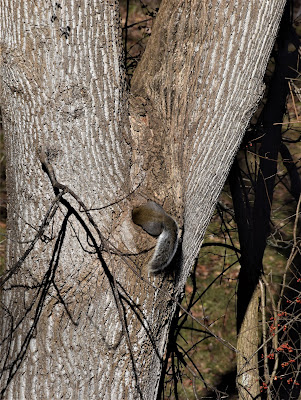 That hole has been there for years but this was the first time I've seen anyone using it.

But I was puzzled -- the tails seemed shorter than those of our usual gray squirrels. John's opinion is that these are young squirrels. Whatever they are, they have a nice cozy spot for the winter. 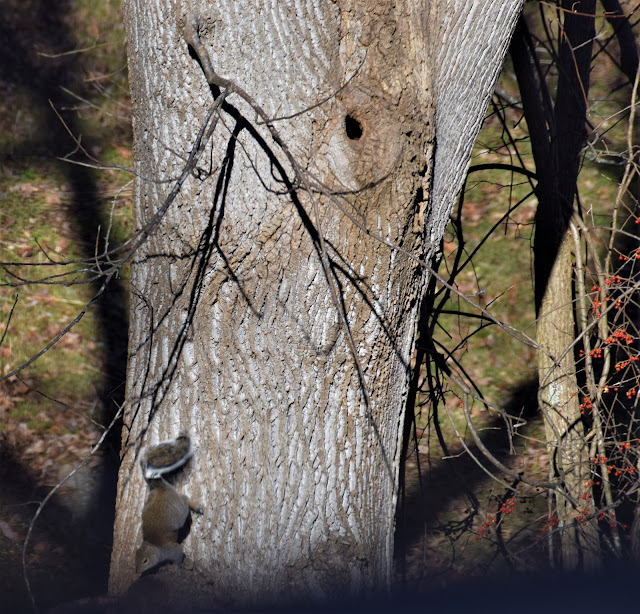 Speaking of squirrels, the other day when Josie was here, she gnawed her way through most of a big apple. When she abandoned the still sizable core, I tossed it out under the bird feeder where a gray squirrel was foraging for dropped seed.  It landed a ways away from him and rolled off down hill

He didn't seem to notice at first, then his head went up and he began weaving around, sniffing the grass and following the path the apple had taken, just like a hunting dog. He finally found where it had rolled to a stop against a fallen limb and got it in his mouth somehow -- the thing was three time the size of his head -- and off he went. 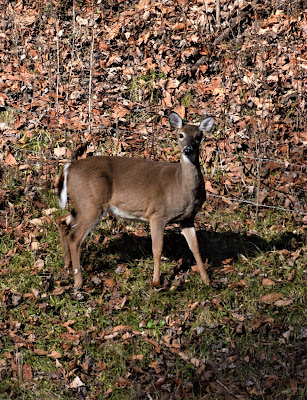 And then there are the deer. The same deer that destroyed much of our garden. Six of them on the hillside by our house. (All these pictures are through the double-paned glass of our bedroom windows.) 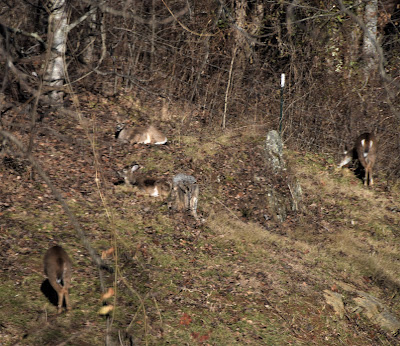 Relaxing in the sun. They're not too worried. When I let the dogs out, Layla and Bob tear off after the deer who yawn, stand up, leap the fence, and disappear into the woods. At least the dogs get some exercise. 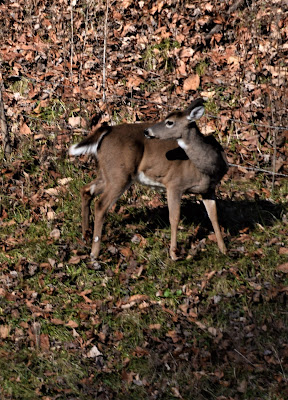 Maybe what I need to do is to accept the situation. Next summer I could become a supporter of some of the many tailgate markets in  our area. And then I could set up a tripod and devote time that would otherwise have been spent in the garden to getting better pictures of our neighbors.


(This last picture is terrible But it's the first time I've caught sight of a mature buck on our property.) 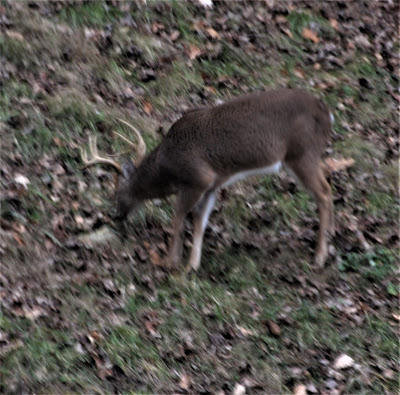 How delightful this must be for you.

Great that you've got deer to look at as well as squirrels. A friend has a "critter cam" that she has captured bears in her yard on the mountain nearby. But just seeing them is so sweet. Have a great day!

My sil who has a very big garden and a deer problem had great results this year with dryer sheets, and with putting dryer sheets in water and then the water into a spray bottle which she used whenever it rained. Bounce was the brand she used mostly, but she thinks anyone would work.

I love your wild life photos, Vicki. The deer here in my woods pay no attention to my little barking dog. She can't get out to run after them, but she hears them and goes nuts. The deer ate my hostas this summer for the first time. I think they come in my yard at night. I'd like to have a camera that took photos at night because I know I have wild life coming into my yard and on my deck.