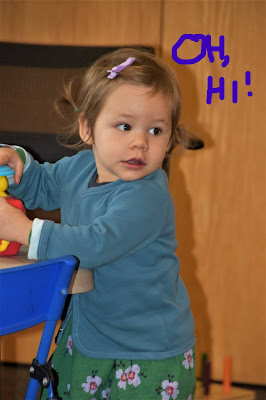 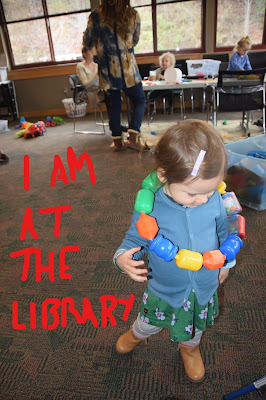 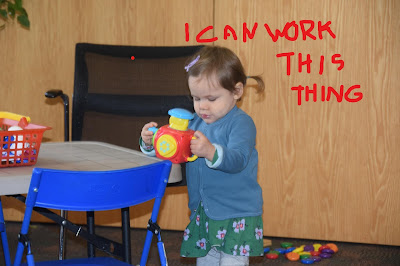 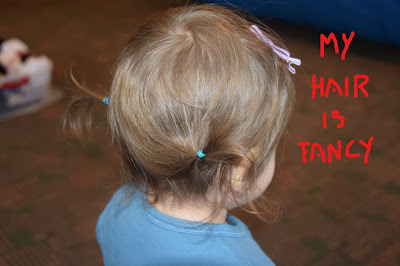 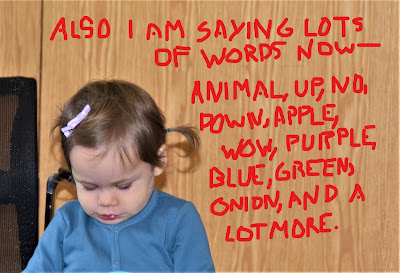 A note from one of Josie's staff: She's not a baby any more. Technically a toddler but more and more a little girl. She's having fun saying words -- she recognizes far more than she articulates but she's getting the hang of copying what we say. (Got to be careful of the language we use.)

She's recognizing colors, some numbers, some letters (M and O are favorites) and the written words Josie and cat.  And she's helping when I try to dress her. As a matter of fact, she loves to help -- to pick up things or put back things (long may it last.)

She has a few music videos she loves to watch with me on my laptop (Wheels on the Bus and Where Are the Duckies? play in my head at odd moments.) And she has found that by saying "Anmals!" she can get John to put her in his lap and show her pictures of animals on his computer.)

We are making a conscious effort to keep screen time to a minimum. When she asks for Wheels of the Bus (by doing the hand-circling thing that accompanies the song,) I tell her we will watch it after lunch, and she accepts that. I think that understanding delayed gratification is a big deal for someone who's just 18 months old.

As her mother said to me recently, 'I know I'm biased but I think she is incredibly smart and pretty much perfect in every way.'

Oh, and she's an ambidextrous (though messy) eater. 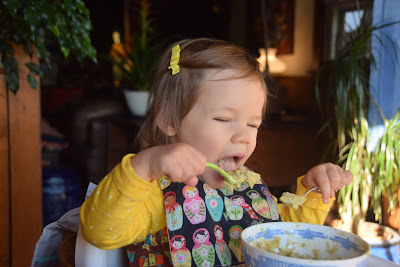 She is such a cutie!!

She is such a cutie!!

Wow on ambidexterity...I wonder which spoon gets in her mouth first, cause it would be pretty hard to do both at the same time! Great photo!

Josie, your mom is right — you are perfect in every way!