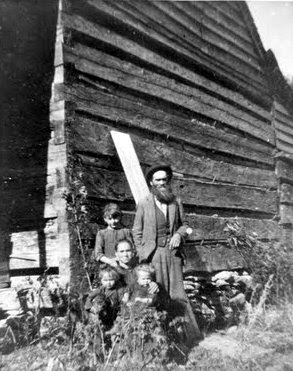 Borned in eighteen and thirty four

Into a hard place and hard times.
And when the times got harder still,
They say he fought on both sides--
Southern gray, Yankee blue -- he done what he had to do.

When the War was over with -- according to some --
Ben and his brother laid for a man,
What had rode off with the family's last horse,
Leaving naught behind to pull the plow.

The thief was one of the Home Guard
Claimed the right 'count of Ben's wearing the blue.
Ben kilt that scoundrel dead and called it even,
Though the horse and its gears was long gone.

Reconstructing hisself, Ben went to Mars Hill;
Studied medicine with the doctor there
Till  he could write a prescription good as any man.
From all round, folks come to him for curing

He couldn't heal what lay between him and Harriet though.
And he went for her lover with a pocket knife --
Meaning to kill the no count feller
But the durn knife couldn't do no good.

So Ben packed up his young uns and took off
With ox and sled and tools
Enough to reconstruct hisself again,
Over yon, on the far side of the mountain.

He lived out another thirty years,

Well content to be shed of that huzzzy,
Watching the young uns growing
Into lives of their own.

In later years he saw his wife once more,
Posed for one last picture at Harriet's side.
Still tall and straight he stood, unbowed by time.
Old age had got her, he told me later . . .

Yet still . . . he'd shook his head and spat before allowing
As she still had that teasing way about her
That had made him try to kill a one time friend
With naught but a  Barlow pocket knife. 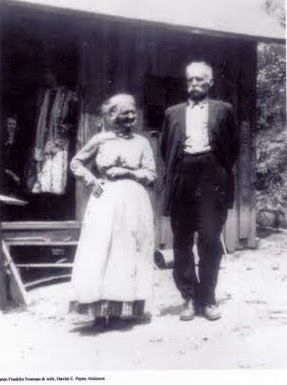 Once again I'm using someone else's kin. I posted about Benjamin Franklin Freeman back in February, before I was doing Sepia Saturdays and his story is just too good to pass up. You can go HERE for more about Ben and Harriet.

And for even more pictures and stories of other folk's kin. visit Sepia Saturday.

I enjoyed this story very much, am on my way over to the other sites to read more and see more pictures. Thank you for sharing.
.........:-) Hugs

"I knowed him, borned in 1834!" When my Australian grandson was three, he talked like that too. He said :"Oma I have catched the ball!"and "My mum buyed it for me."
The poem is very funny and really very good. Thanks for sharing! The photos are very appropriate too.

Vicki - I enjoyed the original post about Ben and Harriet and this is the icing on the cake.

Vicki~~~~~~ that was SOOOOOOOO
good!! I was HOPING that I was reading a tease from "Day of Small Things" !! What a wonderful story! I re~read the earlier post again and remembered how good it was too!Have a great weekend friend! XOXO :)

Quite the life! Makes for a swell read :) Will check out the others anon...

I loved it! What a fun way to start Saturday morning.

Oh, delightful piece Vicki! Interesting that he fought on both sides in the Civil war.

Loved this story. Yes I have run into some who fought on both sides. They did what they had to do for sure.
QMM

Whoever's kin he was, it is a great tale and photo set...the busy beard reminds me of the Amish men today.

That's the way a lot of the older folks used to speak around here, Wil. It has a certain rhythm and beauty to it.

Thanks, Martin and Carol-- I'd started this back then and never posted it -- it still needs work.

Willow and QMM --The both sides thing happened a lot in western NC as most of the poorer mountain folk wanted nothing to do with the war, not having a dog in the fight, so to speak. They tended to get conscripted by whoever came along.

Pat in MN --I think they both were good looking in that last picture.

Superbly written and I could here the voice telling the tale. It made me want to continue to read to discover even more! BRAVO!

Wonderful poetry, really love the dialect, you really have it down to a science, great writing Vicki, thanks!

Totally delightful! I will have to follow that thar trail and learn more about
Ben! I love the closing reflection on Harriet's comments regarding the pocket knife!
I have an uncle who lives west of Murphy, NC. I am going up there in a few weeks! I do love the NC mountains!
Thank you for stopping by this morning! Gracie is doing quite well, and she is a model patient!

Fascinating post...wow..that first picture does look like 'hard times', doesn't it!? And fighting both sides of the war..I have heard of that. Loved the poetry!

That top photo is something else again! The beard is classic!

I like that "he done what he had to do". Definitely worth sharing again.

Wow, that's quite a story you borrowed! And you turned it into literature. Wonderful. As they say "you couldn't make that up"

Thanks, all! I'm really thinking Bean and Harriet may have to show up in one of my novels. I have lots more info on them, graciously shared by a ggrandson.

I believe sometimes where we find ourselves in time is where we are for a purpose of our journey... You tell stories that are so well crafted --- the reader is immediately drawn into the drama of the script. The hills down yonder where you are " Are alive with stories to be told" of extremely interesting characters. They were born and formed right out of the soil in that back country and lived and crafted a unique lifestyle far removed from the mother (euro influence)country and far removed from the North factory mentality coming down on them. True survivors with their own moral code and conducts.
Wonderful read.
Joanny

You're right, Joanny -- I definitely found my muse in Appalachia!

I love your post. It's intriguing that some men fought for both sides in the Civil War. There are many stories like that I think

what a story! the poem is just great

You do so much with the story and with the photographs : the true meaning of added value. A fascinating story which tempted me to go back to the previous post.

Crazy as -- Many stories like that, sadly. Mostly conscripts.

Thanks, Lettuce, Larry, and Alan! It's supposedly all true -- just begging to be made into a book, a ballad, a movie...