Chester...the Dog with a Resume 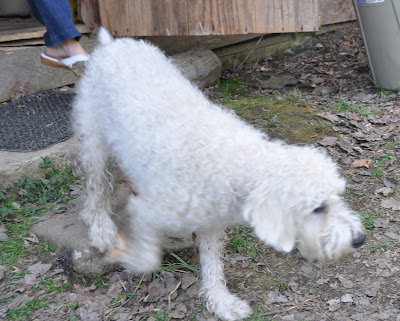 Chester the Labradoodle came to the Easter Party -- and thereby hangs a tail tale...

We include on our invitation to the Easter Party the stern words --"No dogs -- we have plenty."

It just makes good sense -- with cows and chickens and cats and little children, as well as the resident canines to deal with, bringing your dog along has the potential for major aggravation. And besides, what if Everyone on the list (well over a hundred) decided Rover would enjoy a day in the country?

But then there was Chester.

A little back story. It has been tradition for years now for a group of my younger son Justin's friends from college to turn Easter weekend into a bit of a reunion at the farm and they generally begin arriving on Thursday.  They are massively helpful in setting up for the party, hiding eggs, running the Easter egg hunt, and basically doing anything we ask of them.

Justin's good friend Cory is the overseer of all this energy. ("If you want anything done, tell me and I'll delegate it," he says.)

A few weeks before Easter, Alan, (one of the out of town crew) asked Cory if he could bring his new dog to the farm as he really didn't want to board him.

"Absolutely not," said Cory. "It's a standing rule, no dogs!"
I knew nothing of this when, a little later,  I received a charming email from Alan, asking if he could bring his dog Chester, who, according to this email had done well in obedience training, was neutered, was past his puppy wildness, was well socialized, and got along with all people, dogs, and cats. (In addition to obedience school and trips to the dog park, Chester, it seemed, had two playdates with other dogs every week.) 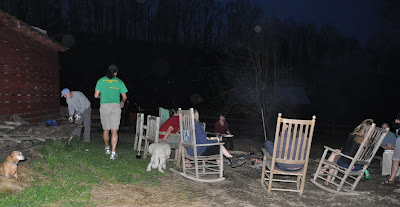 It was the mention of the play dates that did it. After cautioning Alan that he would have to be reponsible for this paragon at all time, I said that he could bring Chester for the weekend.

"I can't believe Alan went over my head!" is the mild version of Cory's response when I told him this.

"But the dog has play dates!" I pleaded.

As you see, Chester came to Easter and all agreed he was a charming addition to the mix. And his people kept a watchful eye on him while he explored the pond and the cow poop and all the other joys of the farm. 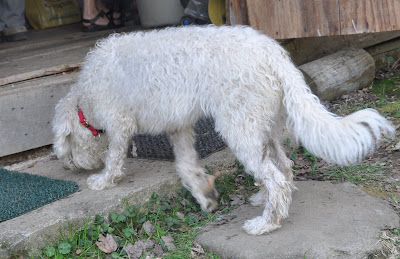 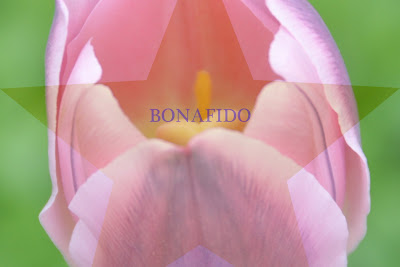 Chester looks, and sounds, like quite the dog ... play date and all ... but Vicki I think you've set yourself up for a barrage of "I want to bring my dog because ...." for next year now that everyone knows you're a softy! HA ... this could get really interesting!

At the end of the day, I want someone to say I'm BONAFIED! That has become my new goal. :)

Love It ! A dog that goes on weekly playdates can go anywhere as far as I'm concerned! :)

What a cutie! I'm not sure I would have let Chester leave again....

I AM a big softy where dogs are concerned, Joanny. Fortunately Chester worked off all his energy playing with the other dogs -- and was quite well behaved.

Yeah, Pat, I thought I might be opening a can of worms with this post but we've laughed about the resume all weekend and I just had to share it. (I WILL be firm. I WILL be firm...)

It's something to shoot for, Estaminet! Right up there with 'righteous gentile.'

He really was a good boy, Carol. And his people were super watchful.

Chester's people, as you might guess, are pretty attached to him, Jean!

I love Chester, but I REALLY love Cory and his delegation abilities. I think he will be big in business some day.

Watch out for these exceptions, though. Might just get out of hand. What a fun time this gathering must be.

I will have to introduce Chester to my favorite Labradoodle, Lily, who lives in Portland, Oregon. I'll post her photo sometime soon! Maybe we can arrange a meeting?

Aww, Chester looks like he was on his best behavior and quite enjoying himself!

A dog with play dates! Who could resist?

Chester is charming. How could anyone resist a dog with a coat like that. Not only is he bonafied but bonaFIDO!

As Chester's owner, I am tremendously sorry if this opened up a can of worms. Never having seen one of the actual invitations for Sunday, I didn't realize that the rule was at that level. I am thrilled and humbled that he made the cut, and I really didn't know this was a big deal when I asked.

Vicki, If it would make your life easier to not have a "Bonafied!" exception, I will make other arrangements in the future. Please email me directly if that is the case.

Chester is still pretty tired from the weekend. I suspect he's sore from all the playing that he and Ali did. One minor quibble though: Chester, in fact, has DAILY playdates with the labradoodle who lives across the street. ;-)

If you want to see more pictures of him, I put them up at http://www.flickr.com/photos/alanhoyle/tags/chester

My favorite picture is from the night we brought him home last November:

He (and we) had a fantastic time at the farm. Thanks again for your hospitality.

Check below for more pics of Chester, Kay, posted by his fond person.

Hi, Willow -- I was unable to do the Magpie today -- just don't have time to visit all the links, alas.

Not to worry, Alan. Everyone, including Cory, agreed that Chester was no problem. But I will be firm with future requests -- probably only bending if proof can be shown that the dog in question has a graduate degree from Oxford.

And I meant it when I said Chester was welcome back next year. He's Bonafied, dadgummit!!

Now I'm off to check out Chester's pictures.

My friend has a labradoodle too, a darker one. They do seem to have a very nice nature, don't they. I love this white one.
I'm glad your Easter party went off so well.
Blessings, Star

Loved the story, and lucky, lucky Chester to be able to spend the weekend at your farm. He looks very charming, and it sounds like he fit right in. One time when I was a kid, I took my little cocka-peeka-poo (yeah I know, but the 'poos' were all the rage THEN)who weighed about 10 lbs to my Grandma's farm for the day. We swam in the river, we herded cows, we tromped through fields. My little dog, Boots was so tired we thought she had died! She didn't move all night, but boy, she had a a blast!
Tammy

Oh, and I think it should be "bonefido"

Who could have resisted such argument ! Chester is just charming, and I guess Alan is something too. I loved your Easter party, you really know how to take the best out of every moment, I'm learning so much from you. Thanks and big hug

Okay, Martin and Alan - Bonafido it is!

It's always fun to watch a dog new to the farm explore, Tammy. Chester had so much energy that he like to wore out Ali Ali.

Yes, Pamela, Alan is rather fond of Chester. See his comment above for a link to an album of Chester pics -- all pretty adorable,I must say.

Just came back from Alan's Flickr: I loved the pictures, Chester is just adorable. We dog lovers are all a little crazy, aren't we?

What a lovely story! You sure had a wonderful easter!

That Chester is a good looking dog. You know French people are crazy about dogs. The last time I looked, there were over 300,000 dogs in Paris alone (that’s a lot of doo doo.) In France there are restaurants and inns where you can bring your dog, they will sit you and your dog can sit on a chair and have a special dog menu among other things. Ah, the life of a dog in France – la vie en rose!

I'd have to agree with you about the crazy part, Pamela! And yes, those are great pictures!

How nice for the dogs, Vagabonde!

My mother told me of traveling in France and Germany and all the well-behaved little dogs sitting under the tables in restaurants, She was particularly fond of the long haired dachshunds.