Oh, the stories that fall into my lap! Just like all the wonderful stuff about Inez and Odessa that Nancy Meadows shared with me, now I'm getting to know someone even closer to home -- Benjamin Franklin Freeman. 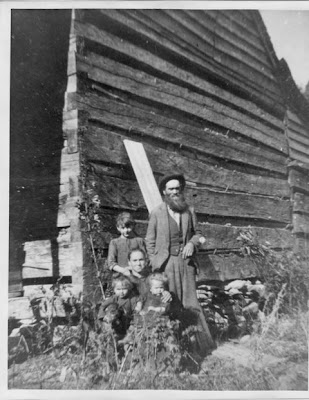 Ben Freeman with his daughter and grandchildren


Terry Roberts, the great-great grandson of Benjamin Franklin Freeman, sent me these old pictures, along with the bare details of Freeman's life.

". . . Benjamin Franklin Freeman (1834-1907), who is buried in the Freeman Cemetery (or sometimes called the "Gid Payne" Cemetery) up on the right just at the head of Anderson Branch. He is my great-great grandfather, and in so many ways is the most ambiguous character in the long drama of the family.

My guess is you've taken a walk or two through that cemetery (sign on the gate reads "KEEP CLOSED OR: CATTLE WILL DESTROY YOUR GRAVES").

Just to give you a tease, he fought in both armies during the civil war. He and his brother killed a member of the confederate home guard (who has stolen the family horse) after the war. He "studied medicine" under a doctor in Mars Hill and "wrote prescriptions" through much of his later life. He tried to kill his wife's lover round about 1870, but since he only had his pocket knife, he managed just to "cut him."

And this is just the beginning. And he was (or is; Faulkner says there is no "was") your neighbor on Anderson Branch. "


In a later email, Terry said:

"My understanding from the Freemans is that they lived (when they lived together)
just up at the head of Anderson Branch. And when they separated, he loaded up a sled (pulled by oxen of course) and "moved to the other side of the mountain," where he built the cabin you see in first picture I sent you.

That first picture (with the cabin) is dated ~1880. Kneeling in front of him is his daughter
Margaret Graham, holding two of her children: Millard and Flora. Standing beside him is his granddaughter,
Belva Anderson, who later married Julius Roberts (and who is my grandmother).

The dog is unidentified..." 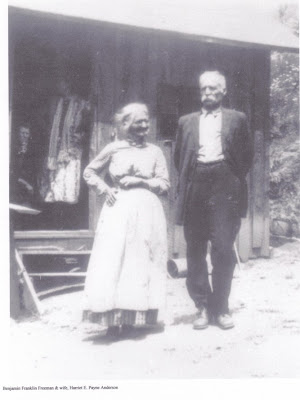 An old photo of Freeman and his estranged wife, Harriet, from late in their lives, when most of their personal war was over.... ca 1900-1905.I asked for more about Harriet,(how could I not?) and Terry responded:"Apparently they were both hot-tempered, passionate, "robust" people, and if
anything, she was meaner than he. When they sued each other for divorce, he had thrown her out of the house and the children stayed with him for several years (fairly young children, girls as well as boys) until she tried to get them back as part of a divorce settlement.

It apparently started with the war and the fact that he left her to join the union army. Then after he returned, he went to jail at one point for making liquor. She may or may not have had a lover at any of these junctures while he was gone. He caught her by virtue of the fact that she gave him a venereal disease.

It's a perfectly sordid story in many ways, and yet when you read the long, rambling stories he told the federal pension agents, you can't help but like him. And apparently the children and grandchildren all sided with him (which should tell us something about her...). He was a bit of a con man, story teller, whiskey maker, sometime farmer who practiced a sort of rustic medicine (two people have told me he "wrote prescriptions": what does
that mean?). And his children loved him even though he apparently was involved in killing one man and tried to kill another....

I'm still trying to piece together the story--slowly working through a time line. As a child, I was told she refused to live with him after the war. But the more I learn, the more complex it becomes....

And oh yes, he wrote a beautiful hand, and she could not sign her name: put an "X" to mark her depositions. 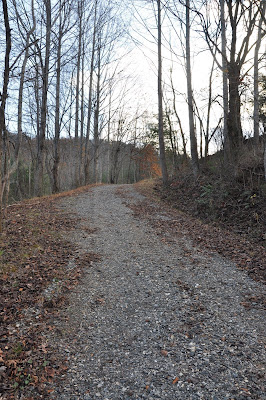 In my backyard, indeed! The Gid Payne cemetery borders our farm. Those are our bad cows the sign warns against. And Benjamin was the grandfather of Clifford, from whom we bought our farm. I had to pay a visit to this neighbor so I went up the road . . . 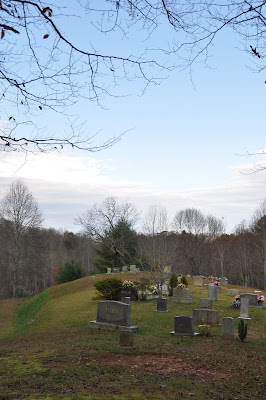 Up on the little hogback ridge, I looked for Ben amongst all his many descendants. 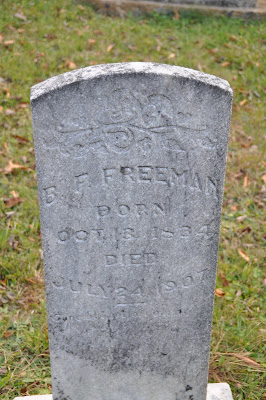 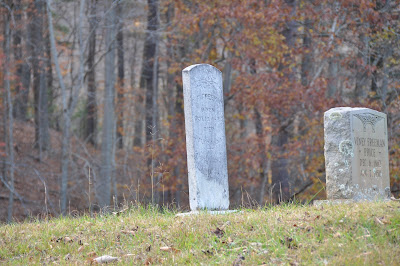 I get the feeling it suits him just fine.

Fantastic post Vicki. I immediately thought of a line from your 'All Hallows Eve' post. "..the veil between this world and the next is thin . . . a time when spirits walk.."

This sounds a lot like WT's ggg grandfather, an old Missour-ah boy, who's young wife sued him for divorce upon his return from the Civil war, on grounds that he abandoned her. He then married his step sister and raised a family, farming tobacco.

What an absolutely fascinating story ... I really enjoyed reading it and seeing the pictures.

So very many great stories! I love hearing them . . . and wouldn't this make a good novel?

Wow, great story and photos -- both the old ones and your new ones.

I'd love to see that cemetery some time - what a great story - I wonder if your Terry Roberts is the same person whose blog I used to follow when she was building a home in Grapevine - we share the same architect. Some much history in those mountain communities and how wonderful for you to be able to bring them "back to life". Thanks for sharing.

Thanks, Auntie K -- I do love those old photos!

Liz, this Terry is a guy and he lives in Chapel Hill. Next time you're down here, I'll show you the grave yard.

Ahhhhh...thanks so much for sharing. That is one of the things I miss so much about the part of my life I was blessed to live in NC. There is such a wealth of 'stories' the old folk had to tell if one just pauses to listen. And to think WE struggle so to create new ones...

isn't it fascinating to find stories which once were real life - reminds me of the expelled girl from the tunnel which i posted a few days ago. i wish i could find the grandchildren, if there are any, from this poor irish soul in the u.s. but so far i don't know her name yet. i love those old photographs.

The life of Benjamin Franklin Freeman is typical of many that once lived in the mountains of Appalachia. These lives were filled with men and women who could turn the air blue with their language. The haze that blankets the mountains today can be viewed as a symbolic, reverberating echo of those words. Daily lives were as rough hewn as the language, lived at an uncomplicated level of survival and simple pleasures, not filled with philosophical ideals.

Today, throughout the mountains, are many places like the "Gid Payne" Cemetery. The names, dates, and simple inscriptions found in these cemeteries offer teasing tidbits, like entries in a library’s card catalogue. But the stories of the people behind these tidbits are like the leaves on a tree. They lived life’s season, withered and fell when autumn arrived, to become scattered across the landscape of forest and time.

We cannot see all the leaves on the forest floor from seasons past. They have become part of the loam that enriches the soil and gives strength to future growth. And so it is with the Benjamin Franklin Freemans of the mountains. Very little may remain that will give a clear and complete picture of the man. But his life, and many others like his, is the loam that enriches and gives strength and character to the people of the mountains today.

Eliane -- the expelled girl was such a sad story -- I hope you find out more.

And Bo! You need to re-post this on you blog -- what a great comment!

How cool! Estaminet, meet Terry. You uns is kin.

You better believe this is Novel fodder!! I love it! How exciting Vicki! :)

And wouldn't you love to hear Harriet's side of the story too?

Fascinating story, which could make a good novel-You are right ! Is'it a new idea for your next novel ?
The old postcards and the cemetery are great !

Miss Yves -- It just might be useful somewhere down the line -- I'm fascinated by this story.

Oh, my. What a surprise!!! Benjamin Franklin Freeman was my gg grandfather as well! My aunt (who is far more versed in genealogy than I) recently discovered some information about BF Freeman and emailed me about it. On a lark, I googled his name and your site came up. I know I have some real characters for ancestors but he and my gg grandmother just about take the cake! Thanks so much for this site!

Welcome, Lisa! -- if you check the comments above you'll find some cousins . . .