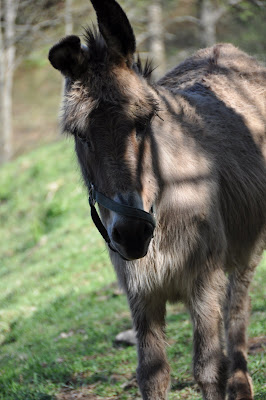 Kate the donkey was in serious need of a pedicure.  Over a winter of standing around, her hooves had become seriously overgrown and she looked like she was wearing bedroom slippers. 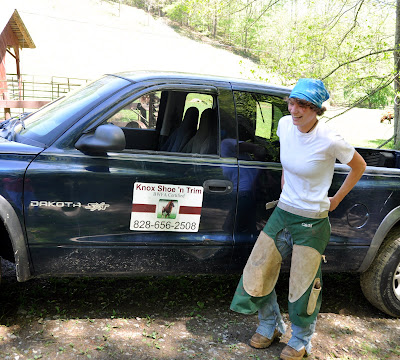 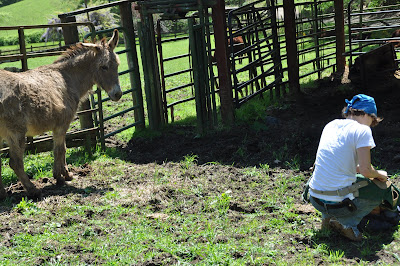 Now while Kate is not technically wild (she'll eat out of your hand if she likes the looks of what's on offer,) she's as independent as a hog on ice and attempts to get a halter on her or to get her into a stall were not immediately successful.

Kate took a look  at Hannah and decided Something was Up -- of which she wanted no part. We begin to wonder if tranquilizers were going to be necessary -- or a dart gun. 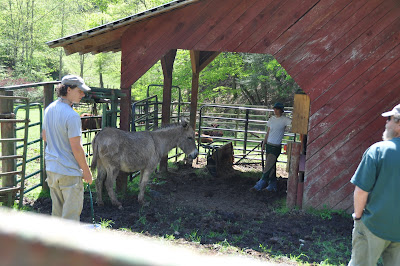 But eventually Kate allowed herself to be coaxed into a stall where Justin and Hannah managed to get a halter on her. (I have no pictures of this or what followed because the stall was dark and it seemed likely that the camera's flash would upset Kate even more.)
It was really pretty amazing. John had a rope on the halter and kept Kate's head in a corner of the stall whiled Justin held her neck in a fairly successful attempt to keep the donkey from moving about or damaging Hannah.
Hannah, let me say, is a small woman who looks about fifteen years old. But she's BWFA certified and  after watching her muscle Kate around and carve those neglected hooves into something more hoof shaped, I'm pretty convinced Hannah could, as they say, beat bears with switches. 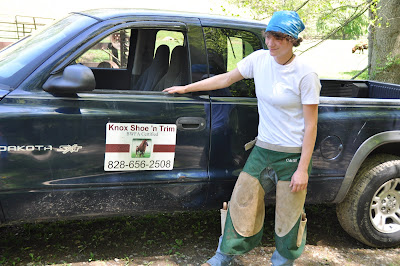 Great post, Vicki! One of my uncles was a Farrier and I remember thinking that it seemed like a pretty risky thing to do. He never got hurt, though.

It's nice to see a woman in what used to be a traditionally male domain. GO HANNAH!

And that Kate is a real cutie!

Haha, that look Kate's giving Hannah in the top shot really says it all, doesn't it? Glad the manicure went smoothly!

Hannah seems to have it nailed (forgive the pun). I love the expressions, "..hog on ice.." and "..beat bears with switches.."

Sounds like that was quite an adventure, but glad Kate got her hoofs done and two thumbs up for Hannah!!! Having had a good sized male neighbor who was a farrier, and hearing his horror stories on occasion, I really have to admire her.

What an adventure for Kate (and everyone else). I never considered what a heavy duty and dangerous job being a Farrier was. Hannah gets my admiration.

And thank you for educating this little city girl to the ways of donkeys. I'm a real animal lover and, at my old age, have had the opportunity to be around two horses this winter.
Sam

It's good to respect an animal's personality and disposition, just as much as a person's. Even my little cockatiel has his ways about him!

Good morning Vick! Loved this post!
That Hannah is one tuff cookie to choose this as her career, I really admire that! I think Kate, when all was said and done, liked her visit from Hannah.

Tatty -- donkeys (and mules) have a great sense of self preservation and are, therefore, innately suspicious of anything new.

Martin -- I love those sayings too. I think that the hog on ice is from New England and I first heard bears with switches from a good old native Floridian.

Very dangerous, Sam. If that kick had landed, there would have been broken bones.

Right you are, Jean. Those little birds have HUGE personalities!

Yep, Carol, Kate was certainly walking better and didn't seem unduly freaked. Hannah will be back in three or four weeks to do some additional shaping -- we'll see how Kate does then.

Independent as a hog on ice? I love it. Kudos to Hannah!

I learned a new word today – farrier. I had never heard it before and would not know how to translate it as I did not know about this profession. But thinking about it, I see that it is needed for animals like your donkey. So to be a farrier is to take care of animals that way? Could I use it as a verb? I was farrying my cat (meaning I cut her toe nails?). Very interesting. Thank you.

It's related to a French word, Vagabonde --

Farriers shoe, horses, mules, and donkeys. Maybe even oxen, who are sometimes shod. Farriers also trim and reshape misshapen hooves (our Kate goes barefoot.) I don't think there's a related verb -- since the word comes from iron, having to do with the horse shoes it really wouldn't work for the cat's toe nails.

Interesting post - what a splendid job for a young woman to choose. I suppose she must be a bit of a horse whisperer, to get the animals to stand calm. Can you be a donkey whisperer?

We need more Hannah's in the world. She looks like she could handle ANYTHING!

I have seen this done to horses before. She's pretty brave!!

Wow. That is one career path I think would be wise to avoid. Sounds terribly dangerous!

Did they paint the hooves when done?

Jennyfreckles -- Hannah definitely had a calm demeanor that helped with the whole process. But a halter and a rope were useful too.

Kay -- Yes, we could use a lot more strong capable women.

No hoof paint, Deanna, -- that's for show horses. Kate's a working donkey -- guarding the cows against coyotes and roving dogs.

Hi Vicki,
I'm sure you all are relieved that phase one is done with Kate's hooves. It's like shearing here--no matter how tame or friendly the sheep are, their antenna go up the minute I start thinking about corralling them for the shearer. I think that sometimes women have an advantage in these sort of jobs, in that they KNOW they can't physically restrain or out wrestle the critter, so they tend to go the route of 'thinking like the animal' and being calm. Regardless though, whether male or female, knowing how an animal thinks, and reacts and working with them in that mindset makes all the difference. Thanks for a great post!
Tammy

Hi Vicki,
We also have a watch donkey. HIs name is Doyle and he is a grey donkey like Kate. He is also suspicious of being confined and hates having his feet trimmed. We've had him for about 5 years and although he is somewhat better than he was at first, he is still a serious hazard to Trevor Burns, who continues to come back over and over despite being kicked and leaned on. We have had to resort to a twitch to get his back feet trimmed. He was about 12 years old when he came to live with us and the sheep and I wish i knew what trauma he experienced to be so terrified of the whole process.

Hi, Joyce -- I don't know that Kate was traumatized -- I think she's just never been handled much. She thinks she's one of the cows and has spent her life as part of the herd.

But thank goodness for folks like Hannah and Trevor!

Hi Vicki,
I was sent a link to your blog with this post and want to say that I think this girl Hannah is, without question, the most wonderful young lady in the world.

You see, she is my daughter.

I wanted to say thank you for posting this about her. She really is a very wonderful person and daughter and I love her more than life itself.

Bless your heart for taking an interest in her and what she does for a living.

Hello, Hannah's dad! I loved meeting Hannah and can tell that she's someone very special. We look forward to seeing her again soon!

Thank you Vicki,
She is someone special.
Peace unto you,
Larry

Went to school at Casey n son with Hannah....she is the truth..get down lil woman