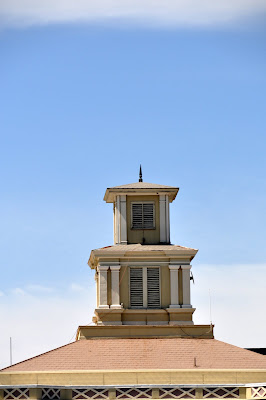 Okay, I have nothing to explain these three pictures except that I took them last week when I was in Burnsville to teach my class.
I guess it was the influence of Merisi who takes such incredible pictures of buildings against the blue sky and posts them on her blog Vienna for Beginners.

Of course, she has Vienna as a subject . . . with the occasional detour to Venice.

But I loved this series of pictures -- they have a creepy, surreal quality to them -- like an old sci-fi  or horror movie maybe. 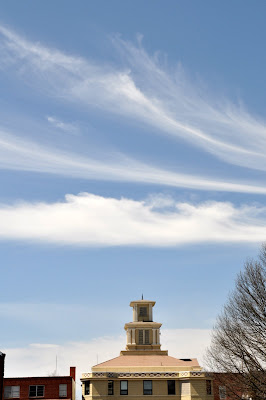 And speaking of horror movies, I have a title for one. Bear with me here.


I was emailing the coordinator of an book festival to let him know that I'd have a new book out in September. . .  titled The Day of Small Thongs.

Fortunately I caught the error before hitting SEND but I've been amusing myself (remember, I'm easily amused) by imagining a story to go with that title.

It's set in Hollywood and the premise is that evil forces have a secret weapon -- a Super Duper Shrinking Ray that shrinks all the thong underwear in a fifty mile radius to a third of its original size. It happens all at once, at high noon, and bedlam ensues, not to mention widespread panic, pain, and general bewilderment.


Okay, that's enough for now. Got that out of my system. See you tomorrow. 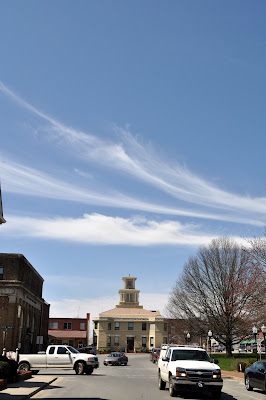 Great shots! I'm reminded to get snaps of the ol' high school cupola( the only thing to survive the demolition )...

You made my otherwise strange day into a very Hilarious -- good belly laugh evening..
Lucky for you caught it -- I usually catch my incorrect wording after I have sent it ...
But I do like that story -- I do not know how any woman can wear those darn things well let us just say that was a good story and I like how you think a little on "The Far Side" for sure.

Pictures worthy of Merisi - and a very funny thought entirely typical of Vicki! That will make me smile all day! Just like me.... I'm forever typing 'Dear Sir or Madman' in my work letters!

Thanks for starting my day with a chuckle. 'Day of Small Thongs' indeed.

I got a good laugh out of your story!

Can't tell you how many times I've been to Burnsville and have never noticed that beautiful building. Guess next time I'll pay more attention!

Ouch, my thong's got stuck!
Is that you over there, Vicki?

Thanks, Subby. I, too, am going to pay more attention to buildings as I'm out and about.

Joanny, the older I get, the more amazed I am at the torments women (and sometimes men) will put themselves through to look a certain way. Yes, I have always been a great fan of The Far Side and that type of off the wall humor.

Oh, Jennyfreckles -- Dear Sir or Madman--I love it! Kind of like 'Compliments of a fiend.'

Thanks, Martin -- the sky was very strange that day strange cloud shapes everywhere.

Hey, Pat, Burnsville has a few quite nice old buildings. It's because of Merisi's blog I've begun to pay attention to stuff like that.

Tee hee, Friko. Sharp scissors, carefully deployed will solve the problem. See you at Fridge Soup in a while.

Small thongs. Thanks for the giggles! (WONderful photos)

Walking in a strange way..... I like your sky shots, they are so wonderful.

You MUST do A Day of Small Thongs, Vicki, I mean really do it. You would give Susan Reinhardt (ACT) a run for her money. Or maybe the two of you could collaborate?
It could also be a Billy Collins poem. Do you know his Victoria Secret poem?
Love those mares' tails. I have some good rock photos that I may download sometime in the next several months. So slow....myself, I mean. Well, my computer is, too.

Thank you for pointing to my blog. :-)

Very interesting skies you captured, sort of a timid blue. The clouds are spectacular, like feather moving across the sky.

I have been reading so much good stuff about your D90 that camera envy may kill me any day now. I even asked my favorite camera store owner how much I'd get for my D80 - 200 Euros.

Re Kathryn & Billy Collins:
I love that "Victoria Secrets" poem! :-)))

Vicki,
do you know his "Emily Dickinson taking off her clothes" one?

Merisi is addictive, Jean and Willow. But so worthwhile!

Thank you , Larry.The sky was most amazing that day.

Kay -- Susan Rheinhardt is a hoot! But she'd have to be the one in the thong, cute thing that she is. And thanks for pointing me to the Billy Collins poem -- I love it!

And, Merisi, I love Billy Collins' Emily D. poem too! Many thanks -- I can see I need to do some more reading.

I am slow.
Only now did I realize that your title .... *giggles*

Remember, Merisi, that imitation is the sincerest form of flattery ...

Oh my goodness!! I'll be laughing over that for the rest of the day. Something like that happening-would be the only way you'd find me wearing a thong-I'm a comfort girl : ) I am glad you caught the mistake.

You made Burnsville look great. Merisa does have a gorgeous blog and makes us think about looking around more when we travel. We have friends who have a summer home outside Burnsville. Pretty quiet.

Your day of the shrinking thongs sounds exciting. The same friends winter home in the islands is named The Far Side.
Sam

Thanks, Sam and Tipper for putting up with my silliness!