Miss Birdie and the Ordinary Family--Conclusion 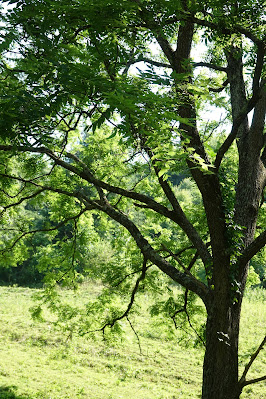 So you come back to find out what went with Elroy. Couldn’t no one understand it, how a boy from an ordinary family like his could turn out so outrageous. Why Artis and Rhodie—

You want to know more about them first? Well, ‘sides from being extry good musicianers, they was just plain folk. They made a real good crop of baccer every year like we all done, along with a big garden, and they raised pigs and chickens and kept some milk cows. Rhodie was a one for making butter—she used an old hand churn that had belonged to her granny. Wouldn’t have one of the electric churns—said the old churn made the best butter. And, though I always prided myself on my butter, I have to admit hers was better. Seemed like even her winter butter always tasted of summer.

One time when me and Luther was loafering around of a Saturday, I said, “Luther, would you run me up to the Terrell’s this morning? I want to take back those quilting patterns Rhodie let me borry.” And that was true but the fact was I had a notion to see just how she made her butter and I knowed she always did a churning of a Saturday morning.

Luther was always ready to go visiting and we clumb I the old truck and set off. When we got to the house, things was as usual—young uns playing in the yard—Billy burying a bone, Joybelle leading around a little gang of chicks she’d hatched out, and the other two boys shooting marbles. Rhodie was setting on the porch with that old clay churn at her side, but her hands was busy with knitting. I was aggravated to think that I’d got it wrong about this being her churning day.

Then I saw the wooden dasher going up and down, only weren’t no one holding it.

“Well,” said Luther, “Maybe Artis has rigged some kindly of a clockwork machine to make it go. He always was right handy with machines. I mind how when he was just a young un, he-”

I didn’t hear the rest of what he said—something about a flying sled and a water witch or some such. I headed for the porch with those quilt patterns in my hand and got a good look at that churn. There weren’t no machinery attached to it nowhere and still that dasher went up and down by itself while Rhodie kept on with her knitting. She didn’t notice me at first for the young uns was making a racket and she was looking close at her knitting. The dasher was just a-pumping and you could hear the cream a-sloshing about in the old churn. Then I heard her kindly whispering to herself.

Fine as flowers in May-“

I stepped forward and held out the quilt patterns. “I brung ‘em back. And now that I’m here, I’d admire to help you with your butter.”

Rhodie kindly jumped, like as if she’d been half asleep. Then she put her hand on the dasher and stopped it going.

“Why, Birdie, I’d like that.” She peeked under the churn top and nodded. “Why, it’s begun to gather—I must have nodded off.”

And we went to the kitchen and I helped her to wash and print the butter and never saw anything out of the ordinary in her way of doing. When we was done and had visited a spell, she give me a jar of buttermilk to take home. I used that buttermilk to make biscuits Sunday morning and they was so light, we had to weigh them down with ‘lasses to keep them on the plate.

But, like I said, except for Elroy, there weren’t nothing out of the way about that family.

What did Elroy do? Well, I’m a-getting to that. Now I told you what good musicianers they all was. And I told you how the band teacher up at the high school took a big interest in Elroy and showed him how to play all manner of instruments, even that big old wrap-around horn. And that same teacher let Elroy listen to all manner of records of strange music— outlandish stuff called jazz and beboop.

Couse, I reckon Elroy knew better than play that music around home. But it had took ahold of him and one Saturday, when the family band was playing in Asheville at that Shindig on the Green—law, how long that’s gone on. Me and Dor’thy went in several times last year and it’s still a sight on earth, all that music and dancing . . .

Anyways, the Terrell Family Band was big doings  back then and folks crowded in to hear them. Rhodie was on the big old bass fiddle and Artis was on the banjo. The young uns played fiddles and guitars except Elroy who played mandolin, though sometimes right in the middle of a song he’d switch to something else

They was in the midst of Sally Goodin, just a-going it—me and Luther ahad made a special trip into Asheville just to see them--and law, folks was going crazy, dancing and whistling and hoorahing like one thing. They handed the lead around to each young un in turn, oldest first and down the line, and they all done some right good licks and folks clapped and whistled but you could see the crowd was waiting to hear Elroy.

And while Tick was bringing her break to a close, sawing at that fiddle till the bow strings was waving in the air, I saw Elroy turn and step to the back and lay his mandolin down. He come back with a thing like a skinny black stick in his hand and when Tick finished up and took a little bow, Elroy stepped to the microphone and commenced to tootle. I mean, there weren’t no tune whatsoever, just a run of notes up and down, and you couldn’t dance to it at all.  The crowd fell quiet and I heard a feller nearby—a real dude and a Yankee, by the sound of him—tell his friend, “That hillbilly on the clarinet sounds like Miles Davis! I mean, the kid has got it!”

I weren’t sure what ‘it’ was but didn’t have time to ask for just then the booing started. Artis and Rhodie hustled the young uns off the stage and Rhodie’s face was as bright red as the ripe mater that hit Elroy in the back as he was leaving.

When things had quieted down some and me and Luther was making our way back to where we’d left the truck, I saw that Yankee feller again. He was surrounded by Terrells and seemed to be talking big, waving his arms about. I caught the words “recording contract” and “our studio in New York.” But Luther was in such a plagued hurry that that was all I heard.

It was a few weeks later that we took our Sunday drive and went to see how the family was holding up after that scene at the Shindig. I had wanted to go the next day, but Luther allowed as how in times like this, a family just needs to be to themselves.

But after a few weeks, the curiosity was getting to both of us and we went on over of a Wednesday, not knowing what to expect.

Well. We got to the house to see everything in an uproar and Rhody  bustling about in a great taking.

“Birdie,” says she, “I’m so glad you come by. Me and Artis and Tick is going to New York City to see Elroy doing a show with some famous jazz musicianer. He has signed a contract for more money than you can imagine and his record company has got us rooms at some fancy hotel. Now who would of thought it?”

They was all just a-laughing and carrying on so that I had to be happy they’d got over the awful way they’d been booed out of the Shindig.

I hugged Rhodie’s neck and Luther shook hands with Artis and we wished them a good trip.

“And Tick’s going too? I asked, trying not to stare at the getups the three of them was wearing—goggles and leather helmets like in the pictures of Charles Lindbergh.

Rhodie laughed. “Even though Elroy’s going to be rich, I ain’t wasting money on bus fare. Tick’s a-going to take us.”

Me and Luther looked at one another and didn’t ask another question that day.

Elroy went on to do real good with his jazz music He changed his name, so as not to embarrass his folks, and the Terrell family always said they still loved him, no matter what.

Which is how folks ort to be with their young uns, even when those quare young uns don’t fit into their ordinary family, don’t you think so? 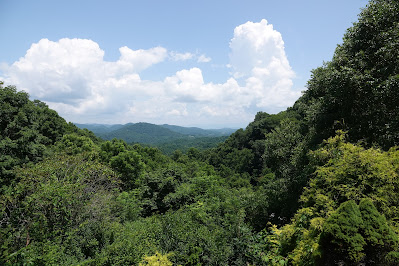 Good for Elroy, making it big in NYC. Someday I guess you'll let us know what became of the rest of those Terrells.

Such a great ending to Elroy's story...as well as the rest of the Terrells. I am sad that I know how Ashvilleans might just boo some good jazz at the Shindig...these people are kind of set in their ways of music (and a few other things!) Glad to hear about the butter making too!

Aww, that's nice at the end.