Miss Birdie and the Ordinary Family--Part 2 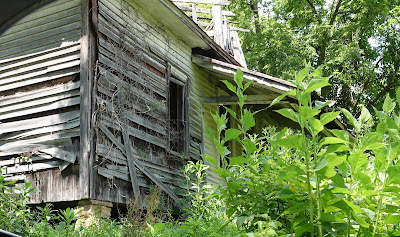 Now where was I. Oh, yes, I was telling you about Elroy. Course they was all of them bumfuzzled when he did what he done, but I believe it was Tick took it the hardest. Tick? She was the oldest girl and had always looked after Elroy, him being the least un.

Yes, I reckon Tick is a right quare name for a girl. But it was all that anyone ever called her. Hit weren’t her real name, of course. Her real name was Luna but when she went to school and told the other young uns as how she could fly, they all laughed and begun to call her Luna-tic and then just Tick, and the name stuck, long after the others had forgot where it came from. Like I said, no one believed her about the flying, but it’s a fact that her folks always sent her to get the apples offen the tallest trees. And she was a right smart of help when it come to barning baccer—getting them heavy-loaded sticks up to the highest tier poles.

Why, that same day Billy treed the cat, it was Tick what went up and got the pore critter down safe. I was setting right there, and I do declare, if I hadn’t know it weren’t possible, I’d a said I seen her shoot up to the top of that great old locust tree and just hang there in midair calling Kitty, Kitty. But her folks didn’t pay it no mind, so me and Luther didn’t like to say nothing. And just then Marvel set in to playing his new mandolin and one by one the rest of the family brought out their instruments and lit into Angeline the Baker. Now, ordinary as they was, in every other way, those folks could purely play!

Making music--that was all that Marvel ever wanted to do. But on a farm there’s always something needs doing, and he was bad to bow up whenever his mama made him put down his mandolin and sent him out to do some kind of chore. And of all the chores there is, Marvel hated picking beans the worst. Why Rhodie said it had got to everwhen she sent him out to pick beans—whether just a mess for dinner or a whole lot for canning—pretty soon it would start to rain and back he’d come to the house with nary a bean in his hand. Now you know you mustn’t fool with bean vines when they’re wet for it spreads that bean blight they get. Anyhow, here comes Marvel, just a-grinning, knowing she wouldn’t send him back till the vines was dry. 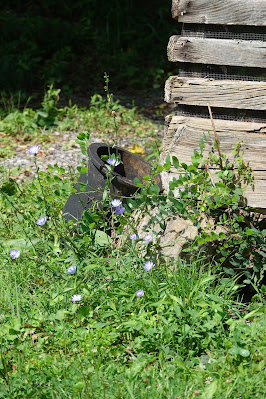 “I watched him one day,” Rhodie told me. “The beans was coming in good and I’d sent him and Little Elroy out to pick all they could. Off they went with their baskets and when they got down to the bean patch, I saw Marvel stand for a minute, kindly staring at nothing. Hit looked like he was talking and then, all at once, it come on to rain. I mean, a real frog choker. The young uns come running back and, when Marvel had gone into the house, I asked Elroy what it was Marvel had been saying and Elroy said all he  knowed was Marvel had been whispering like and then it rained. Just like it always did whenever Marvel didn’t want to do an outside chore.

Now hay making season was coming on and Artis and Rhodie begun to fret about what might happen. You know you got to have fine dry weather to make hay and if Marvel took a notion. . . well, you can see the fix they was in. Then Artis recollected hearing that an old man on the other side of the mountain—Banjer Ben they called him-- was having the driest season ever over there and was looking to hire someone to help him water his crops.

“Rhodie,” says Artis, “here’s what we’ll do. We’ll send the boy over to stay with Banjer. He’ll go willing for I know he’s powerful eager to learn some of them old tunes Banjer plays. And I’ll tell Banjer to get the boy to help with the watering . . . one way or another.”

Well, the upshot was that Artis and the rest of the family had four days of fine weather and got the hay in and the beans picked. While on the other side of the mountain, it rained most every day and Banjers’s crops was saved. And Marvel came home, all rested up and happy as could be, with twenty-seven new tunes he’d l earned.

Will you look at the time! Dor’thy’s coming to take me to the grocery store and I best go find my pocket book. We’ll get to Elroy sooner or later. Oh, he was an Elroy, that's for sure. Hard to say how a young un like that ended up in such an ordinary family.

NOTE FROM VICKI: I don't know about you all but sometimes I get the feeling Miss Birdie is funning with us. 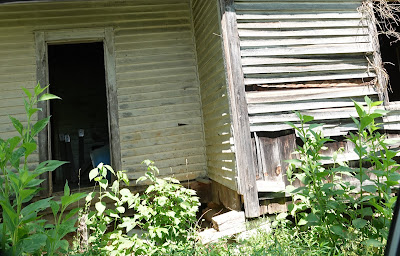 So -- and I ask this with every ounce of respect within me -- is Miz Birdie a member in good standing of the local Liars Club? (Surely there is one.) She'd be a shoo-in to win their annual contest this year.
;-)

I've been very polite at asking the elements to not rain on certain events, like an outdoor wedding...and so far haven't abused the communication. So this is not entirely a fun story as I'm quite sure some of the people in this world are a bit more connected to things going on around us than others. Flying is also something I've long been a believer in, since doing such as a child...though I think I might have been asleep according to others. Can't wait to hear about Elroy!

My last name is Rayner, and I swear we ended a drought in northern Ontario several years ago. I am not kidding, we went in a drought and then it started to rain and never stopped. We came home early.

Miss Birdie talks around and around in circles never getting to the point she started but sure telling us a lot of stuff we never even imagined could happen.

You have a marvelous imagination for recreating this time and its people and events -- especially considering that you're not a native. Although half my family is from the NC mountains, I could not dream of doing as well. Thanks so much for this post.

I'm enjoying this! Wonderful new words to learn too - a frog-choker!

AC--my older son actually seemed to be able to make it rai whenever he was sent out to pick beans.

Sandy-not from here but spent a lot of time with the old folks AND living the rural life as they did.

Weell, my friends used to laughingly call me The Weather Buddha. A little serious concentration and 'knowing' that the Universe didn't really want to rain right then - and almost all of the time the showers passed on by. Can't recall when I ever needed to open an umbrella. Not under my control of course, but the Universe was generally kind.

Having worked at the barns in the "baccer" fields of North Carloina it would have been nice to have someone with Tick's talents when it came to hangin' those heavy "baccer" sticks. :-)