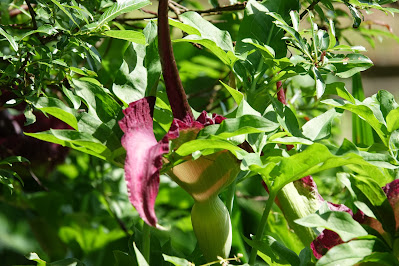 At some point in the distant past, I may have talked here about my curiosity as to the origin of a phrase my Alabama grandmother used when I was overly inquisitive. As in: "What's in the box?" I might ask and if she didn't want to tell me she'd say "Laroes to catch meddlers."
I got the intent of what she was saying but I never saw the words spelled out and never heard the phrase used by anyone else. 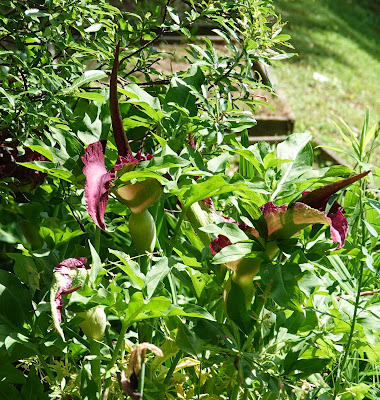 When the internet came into being, I began to search for this phrase and ran into the word medlar which led me down a number of rabbit holes and made me imagine that a laroe might be a kind of net to catch the falling fruit.
Too complicated. An internet search now reveals that laroes or lay rows derive from layovers--a pit trap with branches laid over it. And meddlers aren't bletted fruit but nosy little girls (or others.) The saying is tagged as chiefly southern. The article is a good read  HERE.
I think I'll start using this phrase so as to give Josie something ponder in her later life. 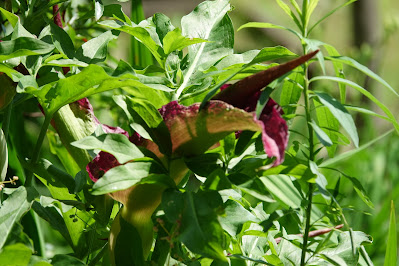 Never heard either term...and certainly have never seen those flowers! And of course I'm curious, and thus you would say your phrase of the day to me. But afterwards, you'd have pity on me and tell me what they are...wouldn't you? Please?

Those beauties are Arum dracunculus--dragon lilies. They smell like carrion and flies are their pollinators. We have them planted t a good distance from the house.

Oh what an excellent name for them!

I love this! I'd never heard this saying. I'm fascinated by idioms and such old sayings. I'm afraid many of them are lost to history, so please pass this one on to that precious granddaughter.