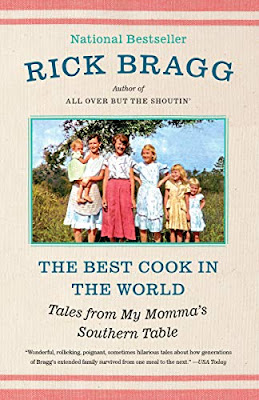 By good chance, this was the book I picked up to get me through election night and beyond. I could not have made a better choice.
Rick Bragg writes of the elemental cooking (and people) of Alabama--where my mother's folks came from. The cooking he  describes is quite familiar to me--corn bread, pork, greens, and beans. It's what my grandmother cooked. It's poor folks' food but in the hands of the gifted cooks of Bragg's family, it's ambrosial.
Using plain, cheap ingredients and taking extra care with then so as to delight the people who eat is the secret--the little dollop of mayo in the cornbread batter, the carrots cut just so to add sweetness to the slaw, the pig's knuckles, slow roasted to a melting deliciousness, the sweet potato cobbler to pacify a bunch of hungry kids. He even tempts me to try my hand at pinto beans--something I've never much cared for--black-eyed peas were the legume of choice on my grandmother's table. But Bragg makes a good case for the lowly pinto.
It's really a book about folks and family--the recipes just keep cropping up. Wonderful, opinionated characters, some more than a little crazy. The part I've read so far is back in the depression, which accounts for the hunger and the treatment of food as something close to sacrament. There's Jimmy Jim, the sour old man who taught his wild daughter-in-law to cook; Ava, who spoke in tongues and turned a tornado, her husband  Charlie, who did his best to put meat on the table, Sis, a cursing block of a woman who showed her love by feeding people, and a passel of kids who weren't above lifting a chicken or a bit of meat from a neighbor's smokehouse.
And as I read, all though this trying election aftermath, as my friends and I wring our hands and wonder how so many of our fellow Americans can support the man we see as the antithesis of civility and democracy, I realize that all these folks--Bragg's folks--that I'm so fond of would likely be square on the GOP side. Like so many of my neighbors. Like, no doubt, a lot of my kin back in Alabama and Florida.
How to explain nice, well-meaning folks, folks you'd love to sit down to a meal with  or visit with on the porch, voting for a small-minded, divisive, corrupt, petty vulgarian?
I'm not talking about the flat out Trumpers with their flag-bedecked trucks or the avowed white supremacists or those whose chief goal is to make the libs cry.
I'm talking about those who say they don't like Trump but just couldn't vote for Biden because _____. Fill in the blank: abortion, fear of 'socialism,' fear of immigrants; fear of 'defunding' the police and releasing anarchy across the land . . . what else?
The Democrats/Progressives need much better messaging. For example, the fact that abortion drops radically when women have access to affordable healthcare and childcare and contraception; that there's a difference between the socialism of places like Cuba (where the USA has had a heavy hand in making sure the economy struggles) and the socialism of the Scandinavian countries; that without the hard-working immigrants, our farmers are in trouble.
And whoever came up with the phrase 'defunding the police' should be ashamed. Yes, I know the original meaning of the phrase was to take some of the funds from the police in order to spread out to other professionals the burden the police are currently being asked to carry--dealing with psychologically troubled individuals, domestic disputes, homeless, and on and on. Defunding the police didn't mean getting rid of law enforcement but that's sure what it sounded like. When dealing with people who may not read beyond the headlines, that phrase is poison.
But I digress. Aside from reminding me of my culinary roots and inspiring me to go back to some old favorites, Bragg's excellent book pulled me back from the temptation to block out or even hate those folks who voted Red. Instead, I'll be working to understand them and their reasons.
Bless their hearts. And I mean that both ways.
at November 05, 2020

Email ThisBlogThis!Share to TwitterShare to FacebookShare to Pinterest
Labels: book, recipes, Rick Bragg, The Best Cook in the World

What a thoughtfully written piece, Vicki. So wise (and I agree about the messaging.That’s very true here as well.) If it helps to know, there are many of us over here waiting and watching alongside you, fingers and toes all crossed - not only for the result but for a profound healing of the political climate - so that people can see the benefits of some of those policies. xx

Thank you, Jenny! I know that the whole world is watching an, for the most part, would be happy to see a regime change in the USA.

Thanks for this Vicki. I actually had a 5 minute talk with a tRump supporter. When she said that's who she voted for, I immediately said "you must have believed what he'd said." She answered, not all of the things he said, but at least he has a positive attitude. Biden seems so gloomy.
I couldn't believe it, but that's her opinion. And the good thing was I could say "we can agree to disagree." She was with me on that at least...not giving me any of his blatant hateful stuff.

I liked reading this. I’m too exhausted by it all to have anything coherent to say. I can’t fathom voting for the guy. It feels like he provides circuses but not much bread to his base - and the people who hold their nose and vote for him instead of a decent man.