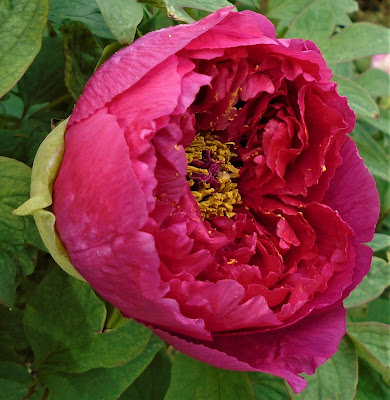 Months go by without Martha Stewart crossing my mind. Now and then I might recognize that I'm having a Martha Stewart moment -- when I iron the linen hand towels, for example, or when I spend half a day carefully swabbing the dust and scale residue from a ficus tree -- leaf by tedious leaf. (One of those trees has been with  me for over forty years, the other almost thirty so I do tend to baby them.) 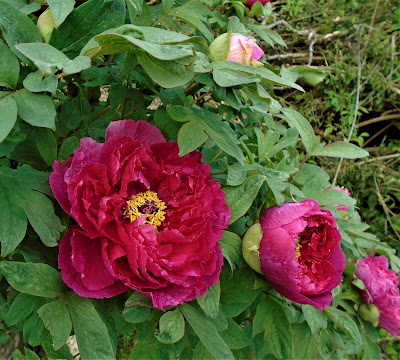 Nope, now that I no longer subscribe to her magazine, Ms. Stewart lives her life and I live mine. BUT, when the tree peony at our entryway bursts into glorious bloom as it did on Wednesday, I send up a heartfelt 'Thank you, Martha!' 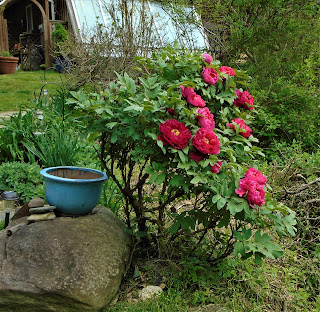 Because, until an article in her magazine some years ago, I'd never even heard of tree peonies. As it happens, they differ from their herbaceous brethren by blooming about a month earlier, by holding their flowers up rather than needing staking, and by not dying back to the ground every winter. 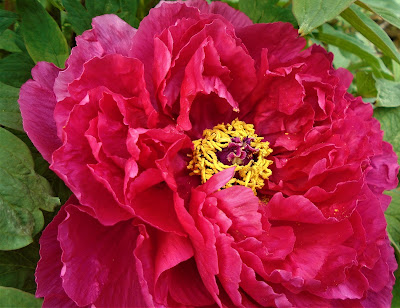 Martha, being Martha, had an impressive array of these beautiful plants at her home. And she made them sound easy and relatively trouble free. I was convinced and went forth and purchased two locally -- this red one and a pale pink one which has gotten overpowered by surrounding bushes on a lower slope. It didn't bloom this year -- probably because of those bushes shading it -- but this is what it looked like when it did. 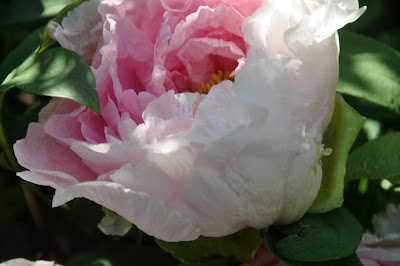 Obviously, it's time to get serious about pruning back those bushes. 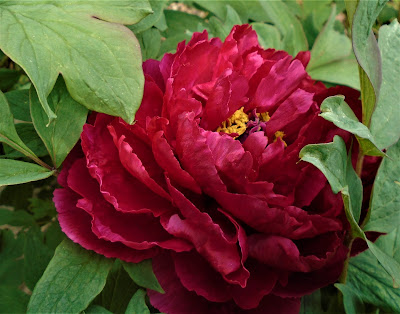 But this red one proves Ms. Stewart was right -- it's chugged along, producing more blooms every year and (and this is HUGE) not getting eaten by the deer that snack on the azalea that is its nearest neighbor.


I think I need more. Perhaps a white or a pale, pale lavender to begin with. . .

You can see some of the many varieties HERE . . . 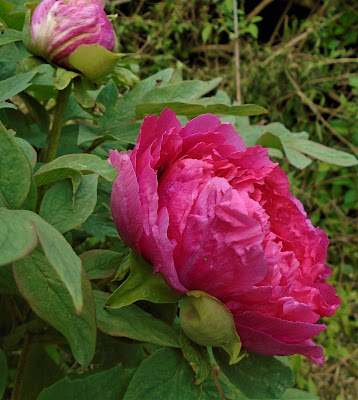 Who knew? Peonies are beautiful, but they do tend to flop.

Lovely! What joy to have huge colorful blossoms!

Oh yes Vicki, prune away. At one home I had a pink peonie bush, I absolutely loved it, High on my list right beside my lilac bush. Gosh I miss that front yard. xx

Hi Vicki! I love the blooms, they are so pretty. I might have to look for one!

I did not know there was a peony tree. I will definitely look for one. Those are glorious blooms.

Glorious. I still get Martha's mag, it's been providing inspiration in my life since I was a very young gal. I just made her wonderful savory Spring tart recipe last week with my own variations. She inspires me to keep creating.