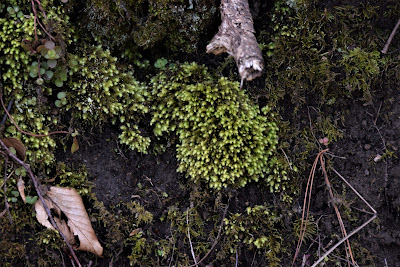 Wikipedia says:
Mosses are small flowerless plants that typically grow in dense green clumps or mats, often in damp or shady locations. The individual plants are usually composed of simple leaves that are generally only one cell thick, attached to a stem that may be branched or unbranched and has only a limited role in conducting water and nutrients. Although some species have conducting tissues, these are generally poorly developed and structurally different from similar tissue found in vascular plants.[3]
Mosses do not have seeds and after fertilisation develop sporophytes with unbranched stalks topped with single capsules containing spores. They are typically 0.2–10 cm (0.1–3.9 in) tall, though some species are much larger. Dawsonia, the tallest moss in the world, can grow to 50 cm (20 in) in height. 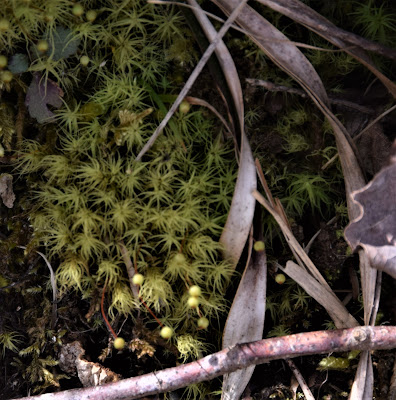 I'm guessing the little white balls are the spore capsules mentioned above.

Mosses are commonly confused with lichens, hornworts, and liverworts.[4] Lichens may superficially look like mosses, and have common names that include the word "moss" (e.g., "reindeer moss" or "iceland moss"), but are not related to mosses.[4]:3 Mosses used to be grouped together with the hornworts and liverworts as "non-vascular" plants in the former division "bryophytes", all of them having the haploid gametophyte generation as the dominant phase of the life cycle. This contrasts with the pattern in all vascular plants (seed plants and pteridophytes), where the diploid sporophyte generation is dominant.
Mosses are now classified on their own as the division Bryophyta. There are approximately 12,000 species.[2] 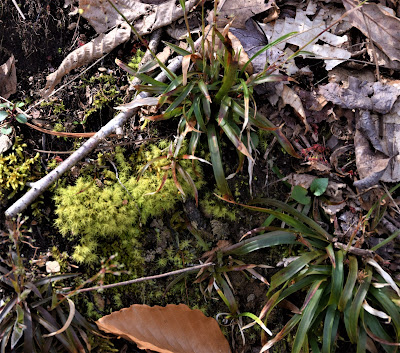 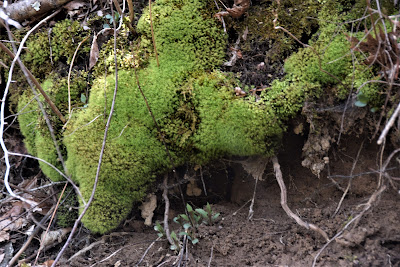 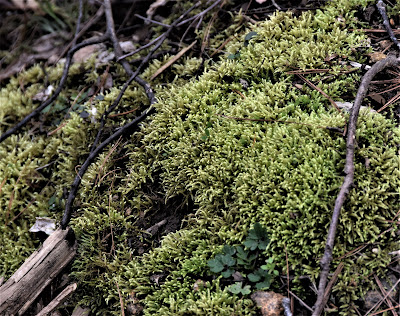 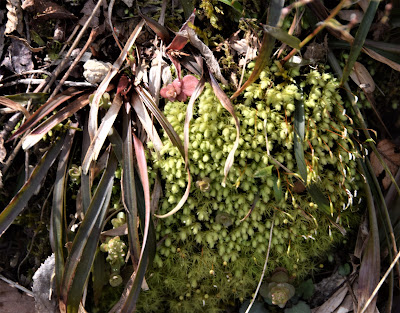 Great idea for a post -- a lifeform that I have almost totally ignored.

I always love to touch mosses, and they are soft and damp usually. I remember in the pine woods of FL there was a lot of "reindeer moss" which wasn't true moss, and was dry and fragile. But it was fun to cart home and use in models of villages or homes, or with train sets.

Did you ever read Elizabeth Gilbert's A SIGNATURE OF ALL THINGS? It gives some fascinating stories about mosses. Several people in our community have moss gardens. I'm amazed at the many varieties there are growing naturally right here.

I have read it -- and need to revisit it.

Since we've moved to the mountain we've found that the frequent "moist" weather here is ideal for the rapid formation of various mosses, lichen and such. I started "foraging" for them last summer and am even able to roll up some of the common moss in sheets. Much crafting has ensued!