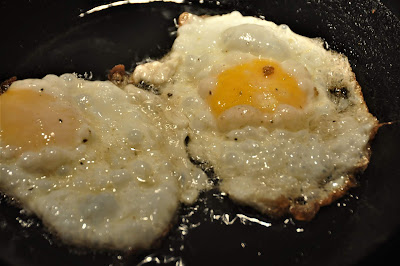 The whites had set
and the edges were crisping brown on both eggs
before she remembered.

Six months and five days he'd been gone
and here she was, fixing an egg for him.

Early mornings she was like that --
not thinking, just running on auto pilot.

Six months and five days --
seems like she'd be used to it by now.

But still she woke scrunched over to her side of the bed,
still turned on that stupid morning news show he favored,
still listened for the crunch of his truck's tires on the gravel drive.

Her egg was ready, firm whites, runny yolk--
the way she liked it.

She slid it onto the waiting piece of toast
where it sat cooling, congealing
as she basted the other egg with sizzling grease,
till the white clouded the yolk and the yolk was hard--
the way he liked it.

Slowly shaking her head, she lifted the perfectly fried egg from the black iron skillet
and flipped it into the bucket of scraps for the chickens. 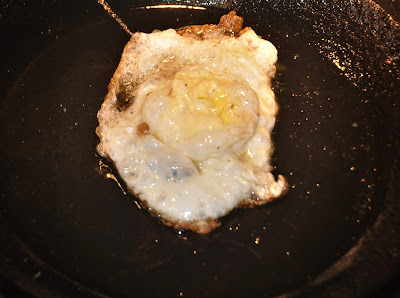 This was lurking on my desktop and when I opened it, I hadn't a clue as to what it was meant to be -- the beginning of a story? Is her husband dead or just missing? Then I realized it was meant to be an addition to the Dark-Thirty series I  posted last month. I still don't know about the husband.
at June 08, 2018

I'm still getting used to being the elder i am, and having frequent losses of friends, neighbors, pets, those who just yesterday were talking with me. Death is now part of life, more in my mind anyway.

I am someone who has never been able to accept death. It terrifies me and angers me. I fall apart when someone I love, human or pet, dies.