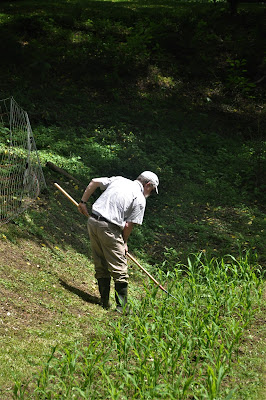 After last week's rains, the weeds were flourishing. The corn was big enough to remove its protective netting and John set in to hoeing while I thinned it. 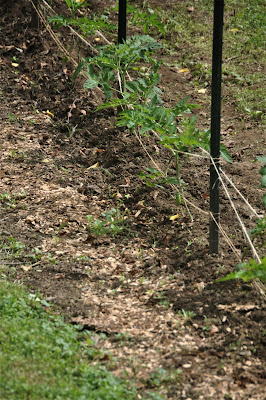 He also ran a second string to hold up the tomatoes and then I unched along on my derriere, suckering and weeding around each plant. They're looking good at the moment, some even have little green tomatoes on them! 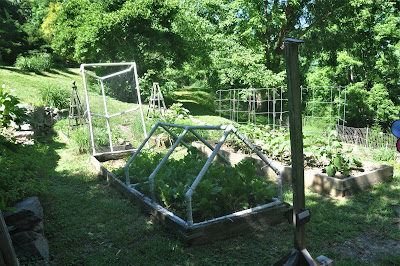 In the upper box beds, the lettuce is thriving. So far, the covers are keeping the pests out. 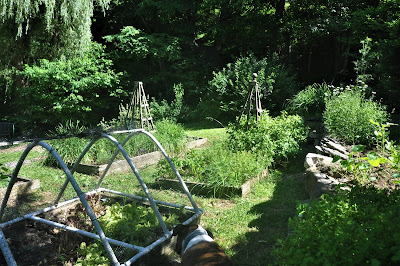 The uncovered beds have summer squash and cucumbers and various herbs, none of which have been bothered by deer or rabbits in the past. The only damage I saw was that something had eaten the tops off a few sunflower seedlings.

Next to weed the asparagus, hoe around the kale, collards, sweet potatoes, peppers, and beans in the lower box beds. Then the potatoes and pumpkins . . .

I'm trying hard to get all caught up in the garden before leaving for John C. Campbell this coming Sunday. Today's the day as I'll be keeping Josie on Friday and Saturday.

Fortunately, the weather is just about perfect -- clear and breezy and cool enough to need a blanket along with a light quilt at night. Days like this, anything seems possible. 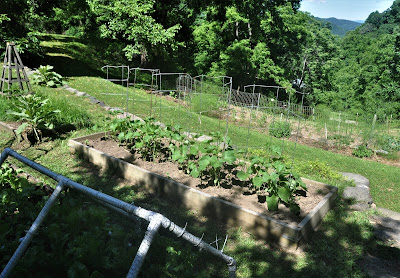 Y'all will have some good eating out of that garden! Isn't this a lovely season of weather?

I know you will enjoy the benefits that playing in Mother Earth provides. Sounds like wonderful eating soon, xx

You have a wonderful garden and beautiful landscaping! You should have some really wonderful fresh food! Enjoy!