The Prescient Wisdom of Douglas Adams

The Hitchhiker's Guide and the other four books of the trilogy ( it's complicated) have been a part of my life for almost forty years now, mostly in recordings of the radio and television versions as well as by recorded books. Recently I began re-reading this amazing synthesis of extreme silliness and deep wisdom. There's always something new to discover.

What popped out at me yesterday was Adams's description of Zaphod Beeblebrox: "... good- timer, (crook? quite possibly), manic self-publicist, terrible bad at personal relationships, often thought to be completely out to lunch.

"President? No one had gone bananas, not in that way at least.

"Only six people in the entire Galaxy understood the principle on which the Galaxy was governed, and they that once Zaphod Beeblebrox had announced his intention to run as President it was more or less a fait accompli: he was ideal presidency fodder.*

* " . . . The President in particular is very much a figurehead -- he wields no real power whatsoever. He is apparently chosen by the government, but the qualities he is required to display are not those of leadership but those of finely judged outrage. For this reason the President is always a controversial choice, always an infuriating but fascinating character. His job is not to wield power but to draw attention away from it."

At least our current distraction has only the one head and two arms. I don't think I could bear two heads like that. 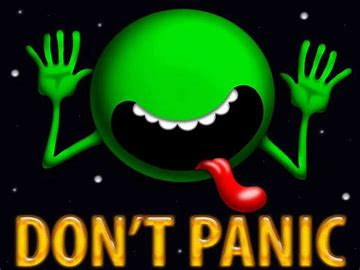 Email ThisBlogThis!Share to TwitterShare to FacebookShare to Pinterest
Labels: book; a little political

Love Hitchhiker! Not sure his definition of President with no real power is true any more. Wish.

I was just thinking about Zaphod Beeblebrox yesterday. Funny you should write about him today. I'm feeling somewhat like the sofa in Dirk Gently's Holistic Detective Agency; "irreversibly stuck on the staircase to Richard MacDuff's apartment; according to his simulations, not only is it impossible to remove it, but there is no way for it to have got into that position in the first place." When will this nightmare be over?