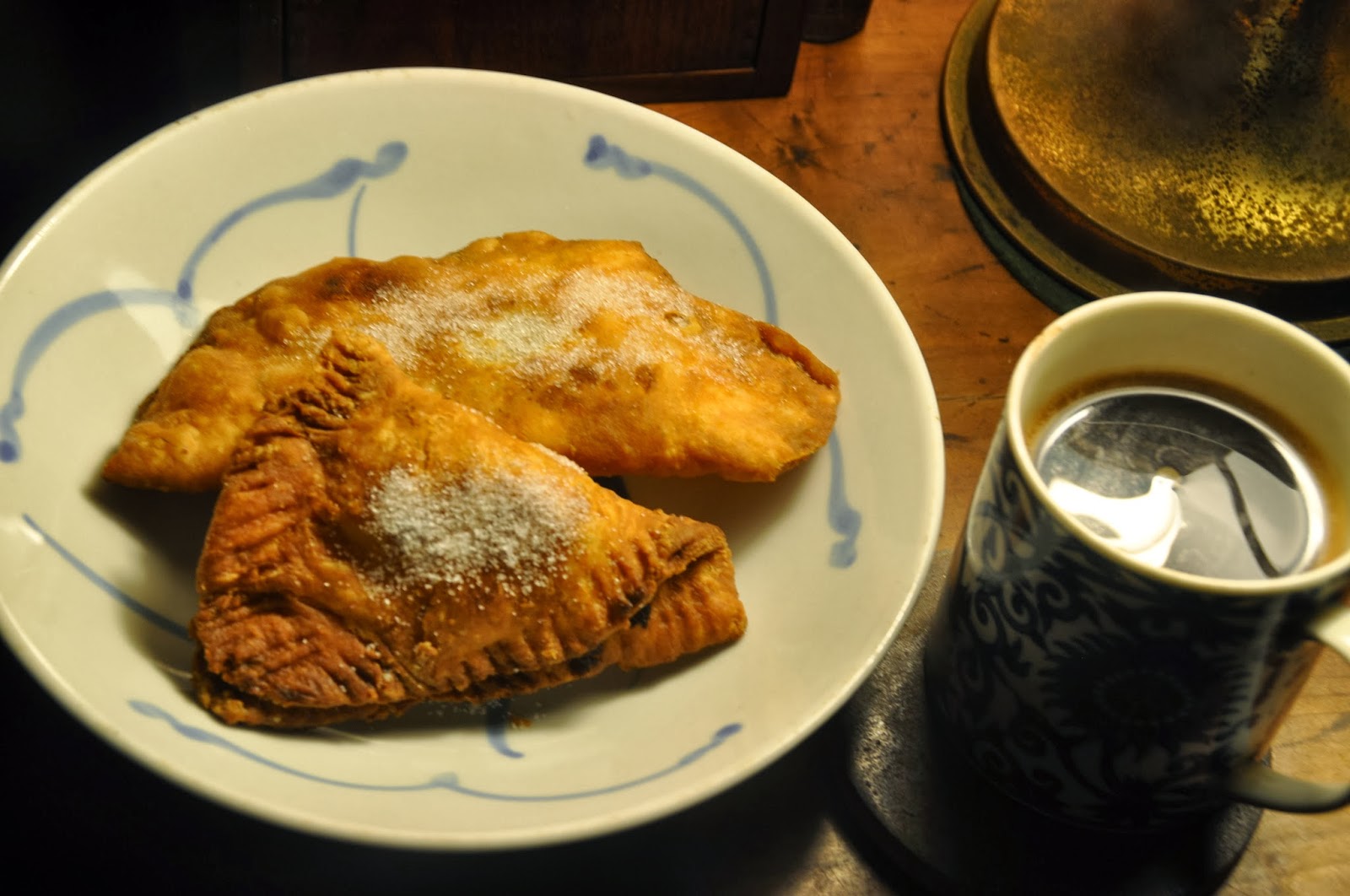 Fried pies! I first encountered these back in '60 when driving from Emory in Atlanta down to University of Florida.  There were four of us, all of whom had sweethearts in Gainesville, and a highlight of the trip was stopping at some marvelous roadside barbecue place near Macon. There was terrific 'cue, all the sliced white bread you wanted, and fried peach pies! 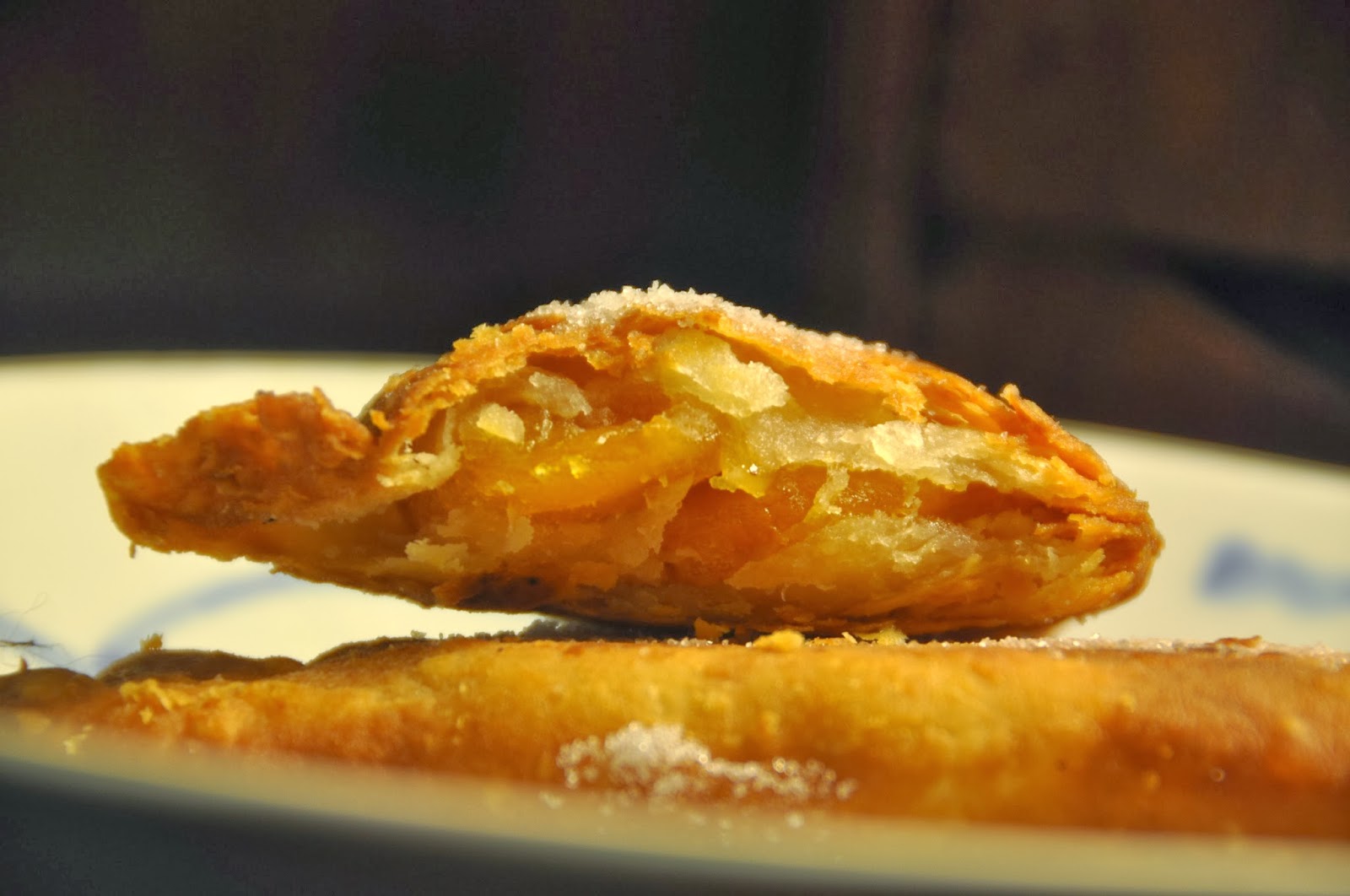 That was about fifty three years ago. I don't think I've had a fried pie since. But back on Tuesday, when the oncoming snow storm made hanging out in the kitchen an attractive proposition, I made some. 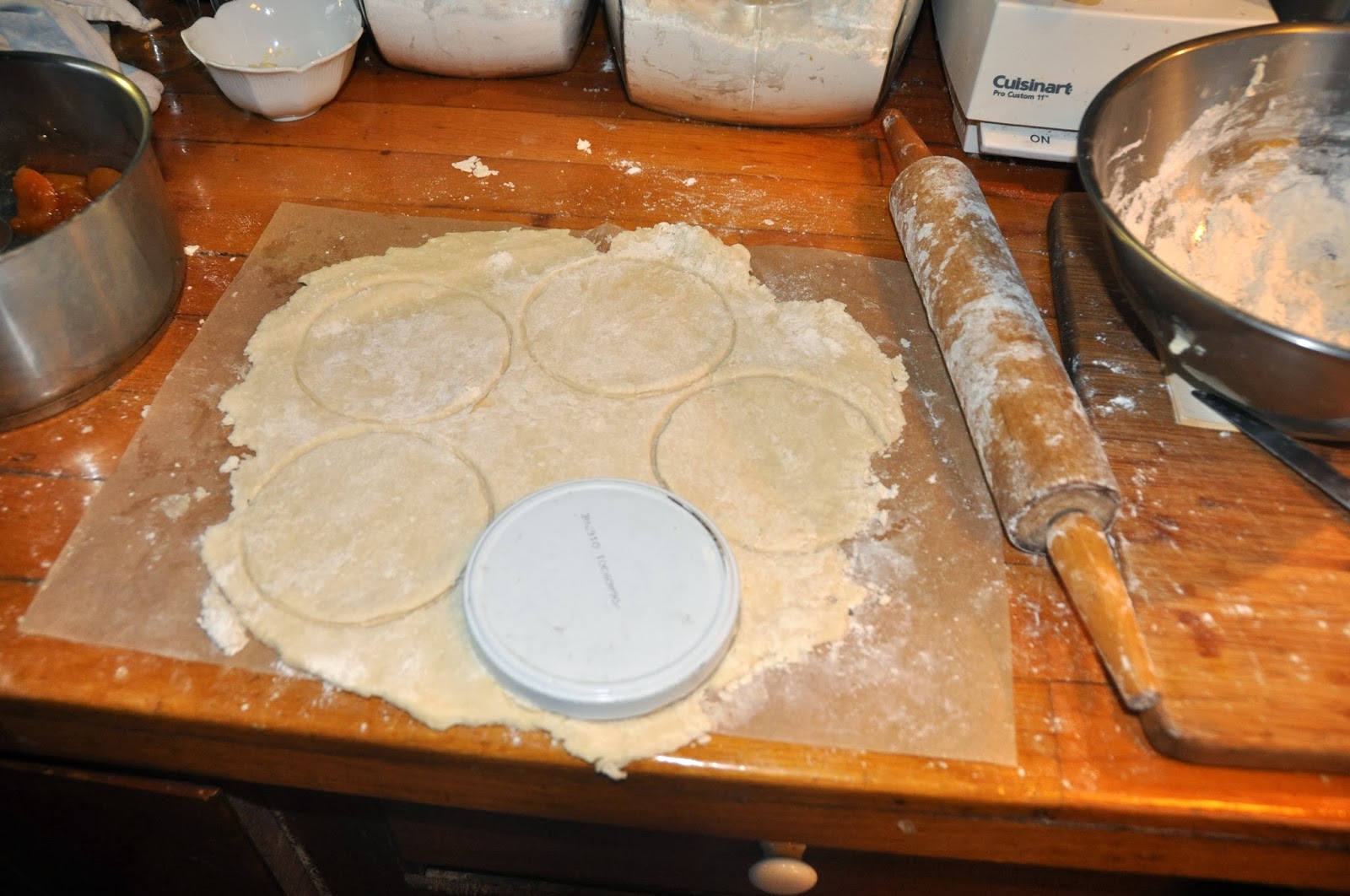 I stewed some dried apricots and set them aside to cool while I made a lovely rich crust. The recipe (below) says it makes 18 pies and you cut six inch circles.  I don't have a cutter that size so I used a large jar lid and then rolled the cut out circles till they were about six inches. 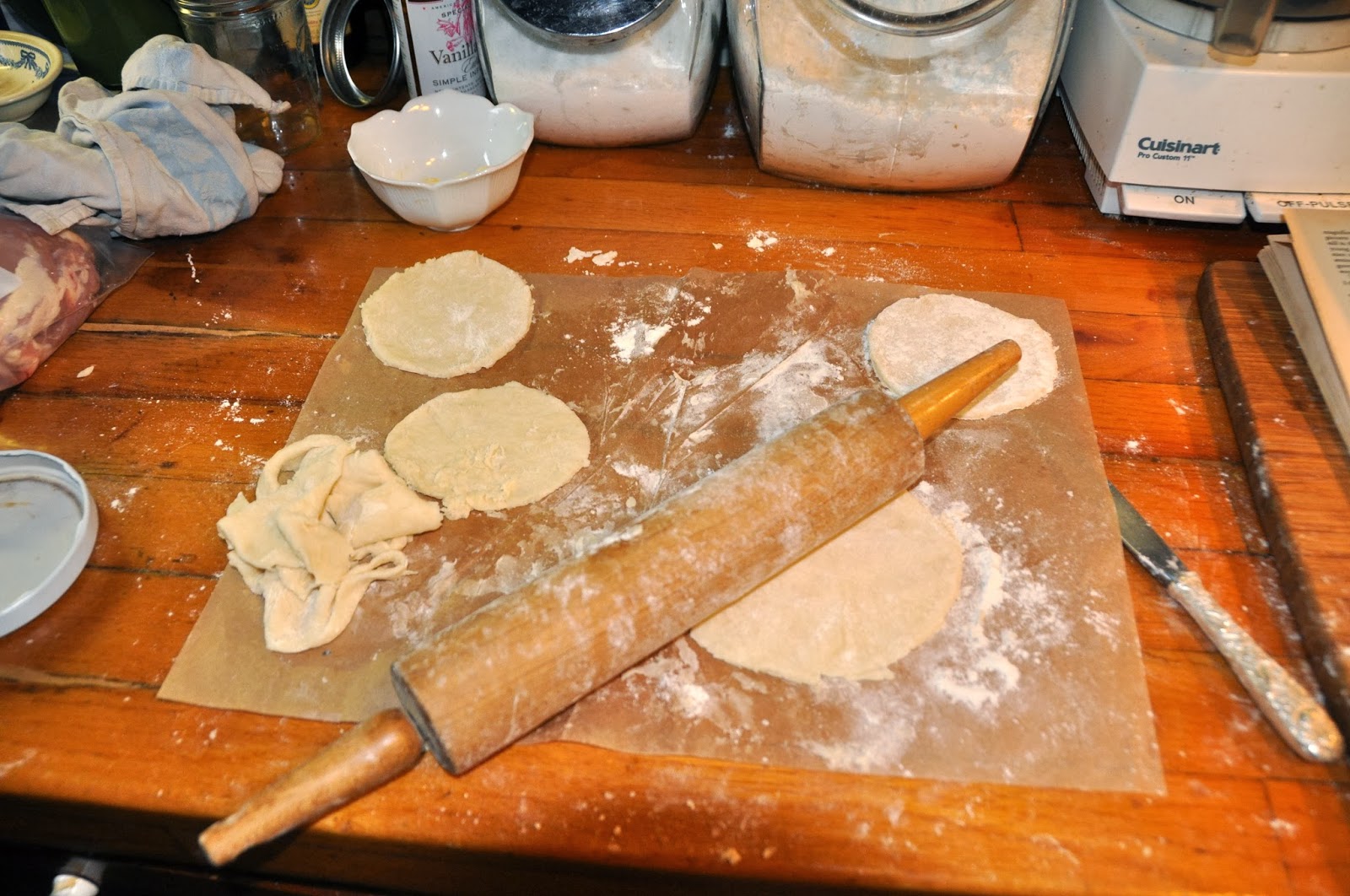 Plop a bit of stewed apricot on one side, fold over, and seal with a fork dipped in cold water. 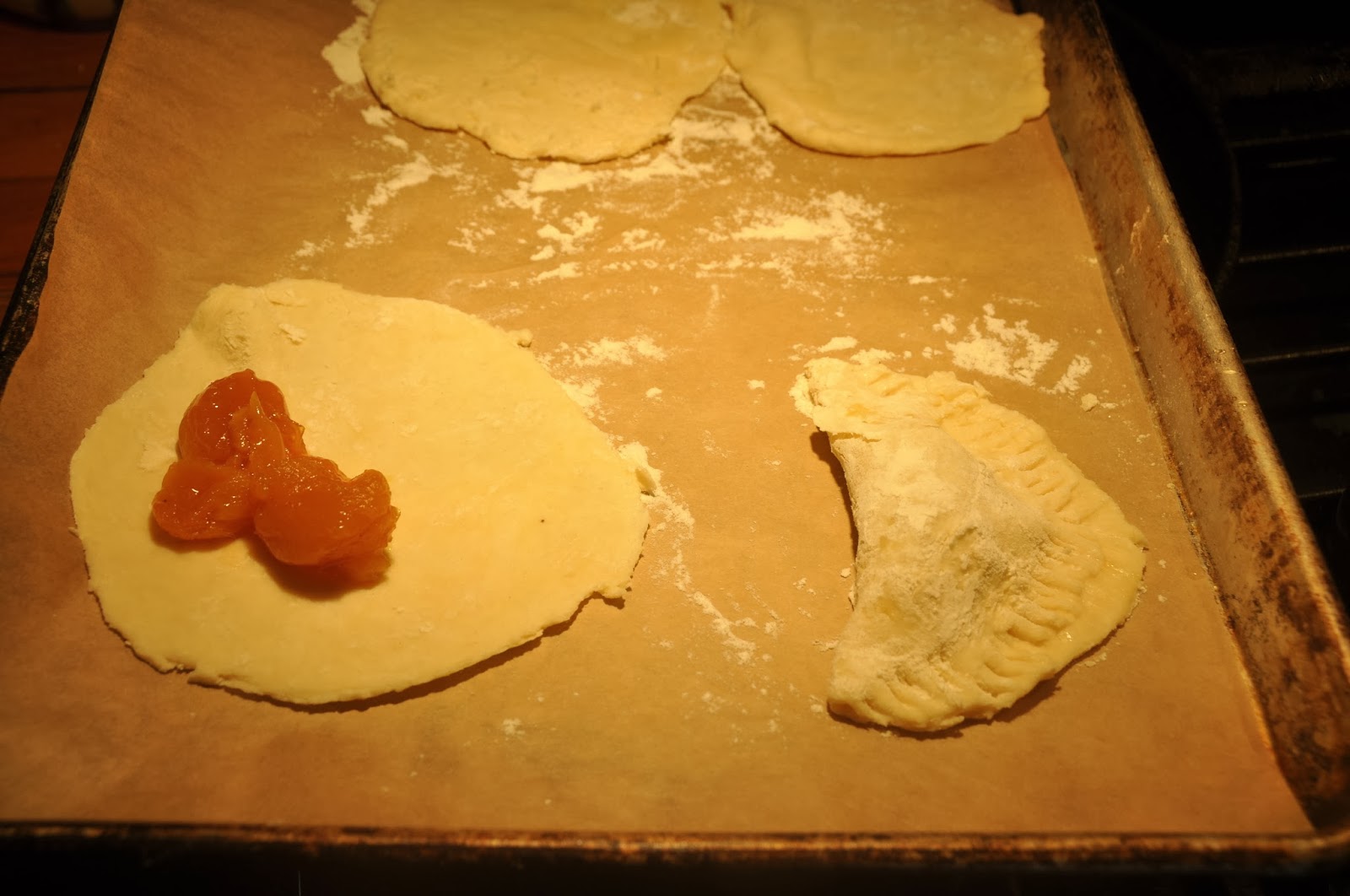 Fry till golden, turning a couple of times. 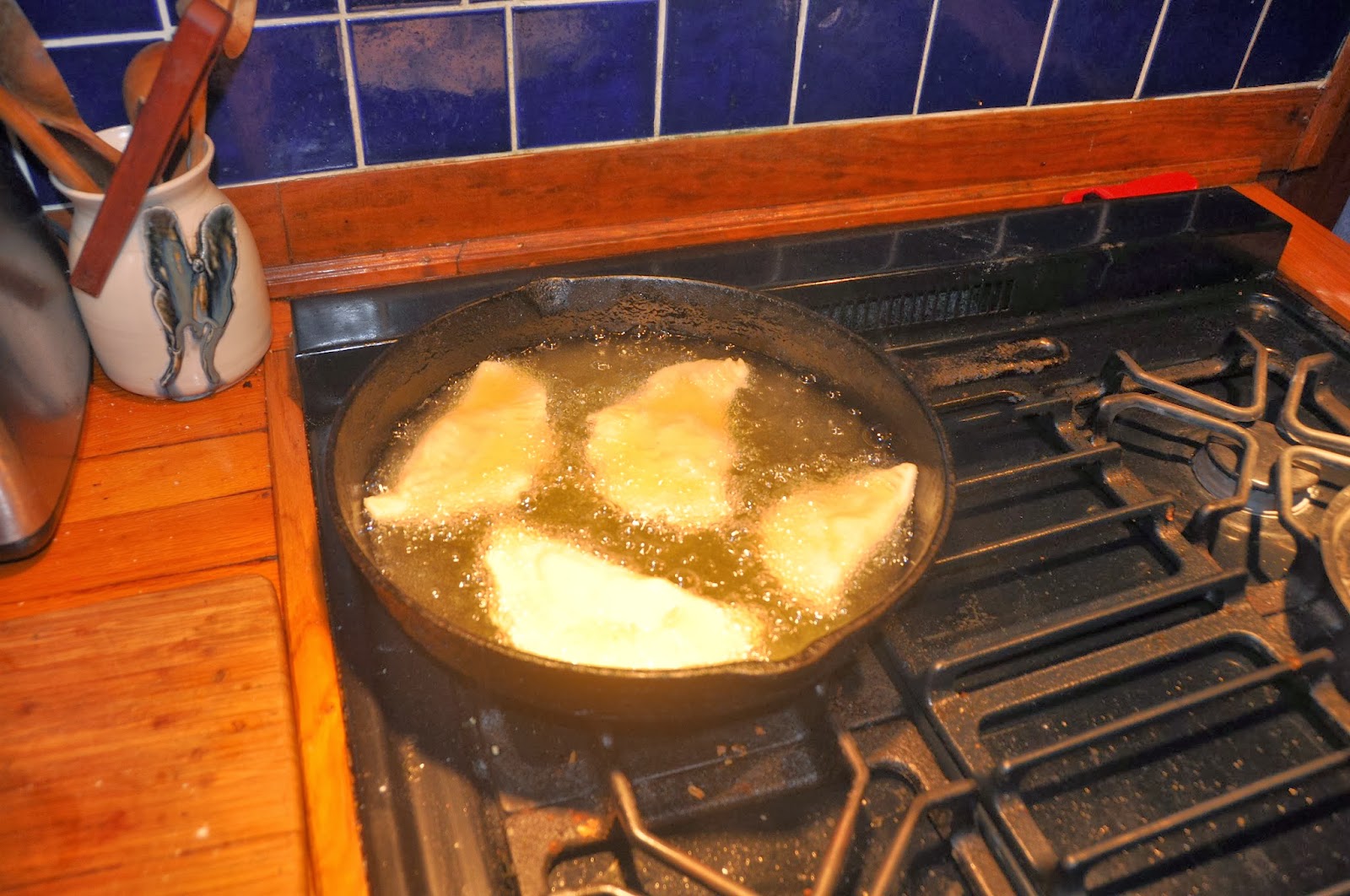 Drain, sprinkle with granulated sugar, and allow to cool a bit (or you'll be sorry.) 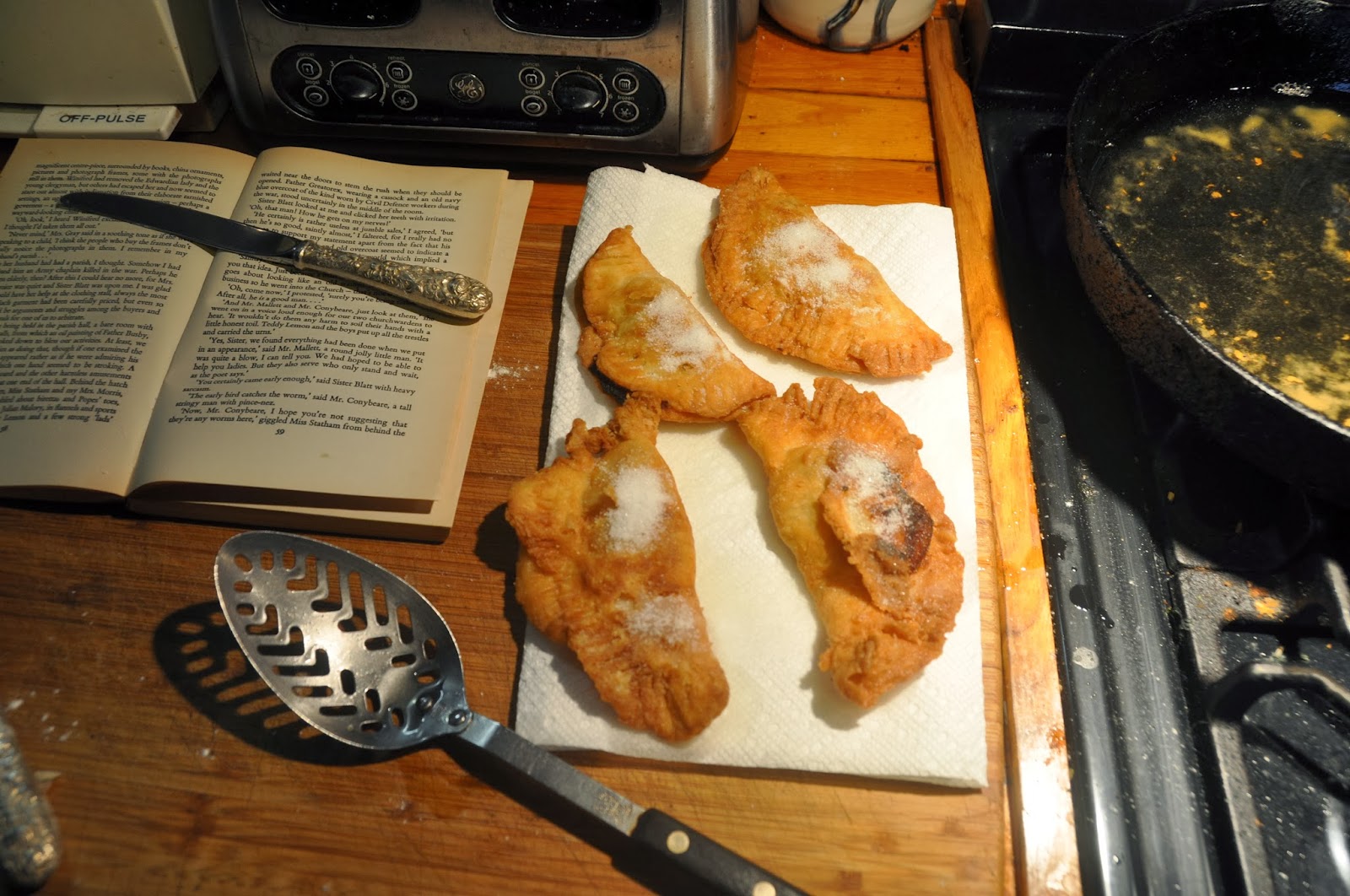 12 oz. dried apricots -- stew covered over low heat in a saucepan with water to cover till fruit is soft and water almost gone. Set aside while you make the dough

Mix flour and salt together in a large bowl. Cut in shortening till mixture is crumbly.  Mix in milk and stir till dough forms a ball. Roll out on floured surface cut into 18 6-inch circles.

Spoon a bit of filling onto one side of each circle, fold over, seal with a fork dipped in cold water.

Fry a few pies at a time, browning both side. Drain on paper towels.

Oh, yumyumyumyumyum! The pastry is INCREDIBLE! Flaky and light ...
and delicious. . . 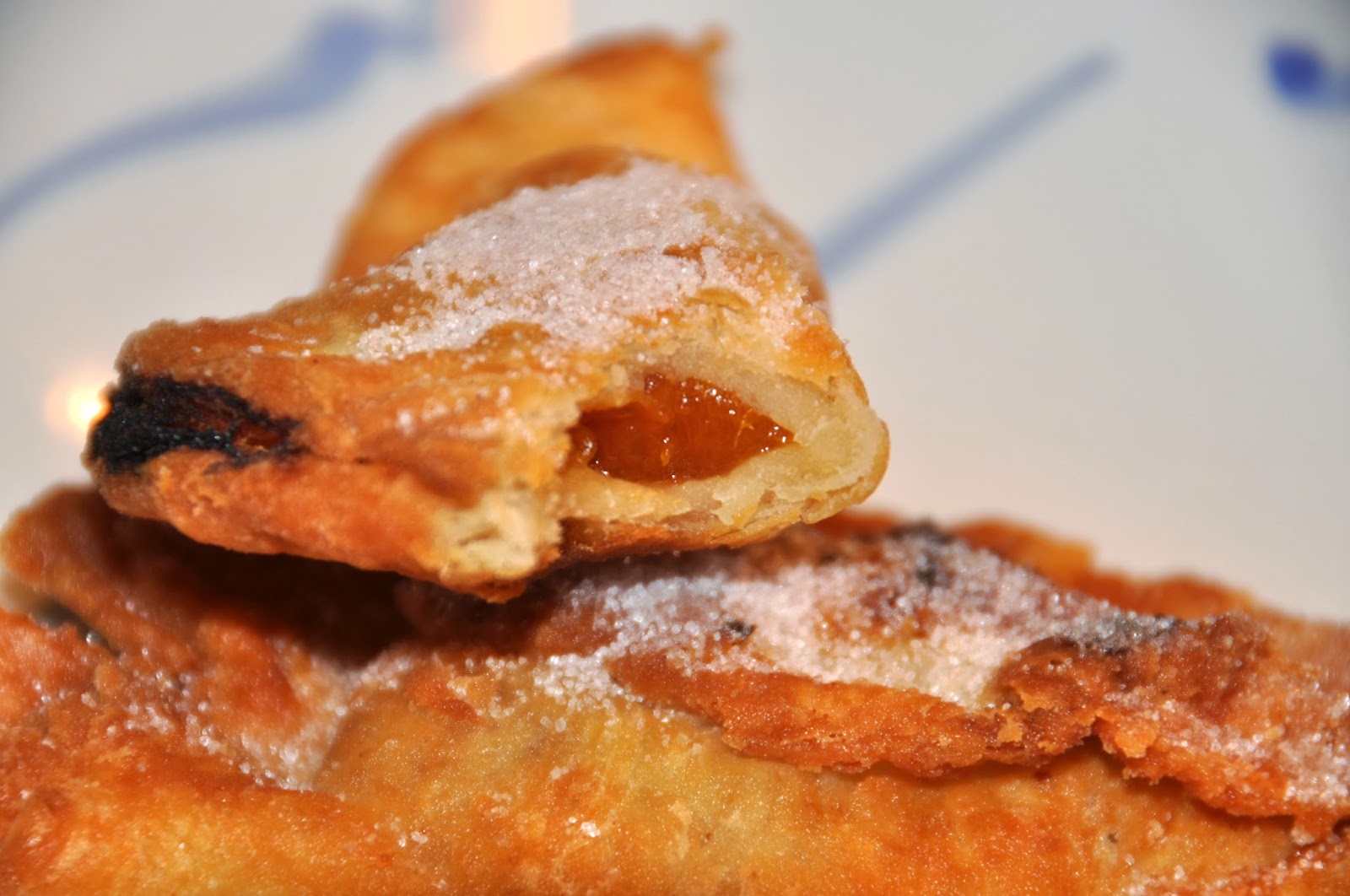 I swear, this is NOT the sort of thing we have often.

But it sure is good. 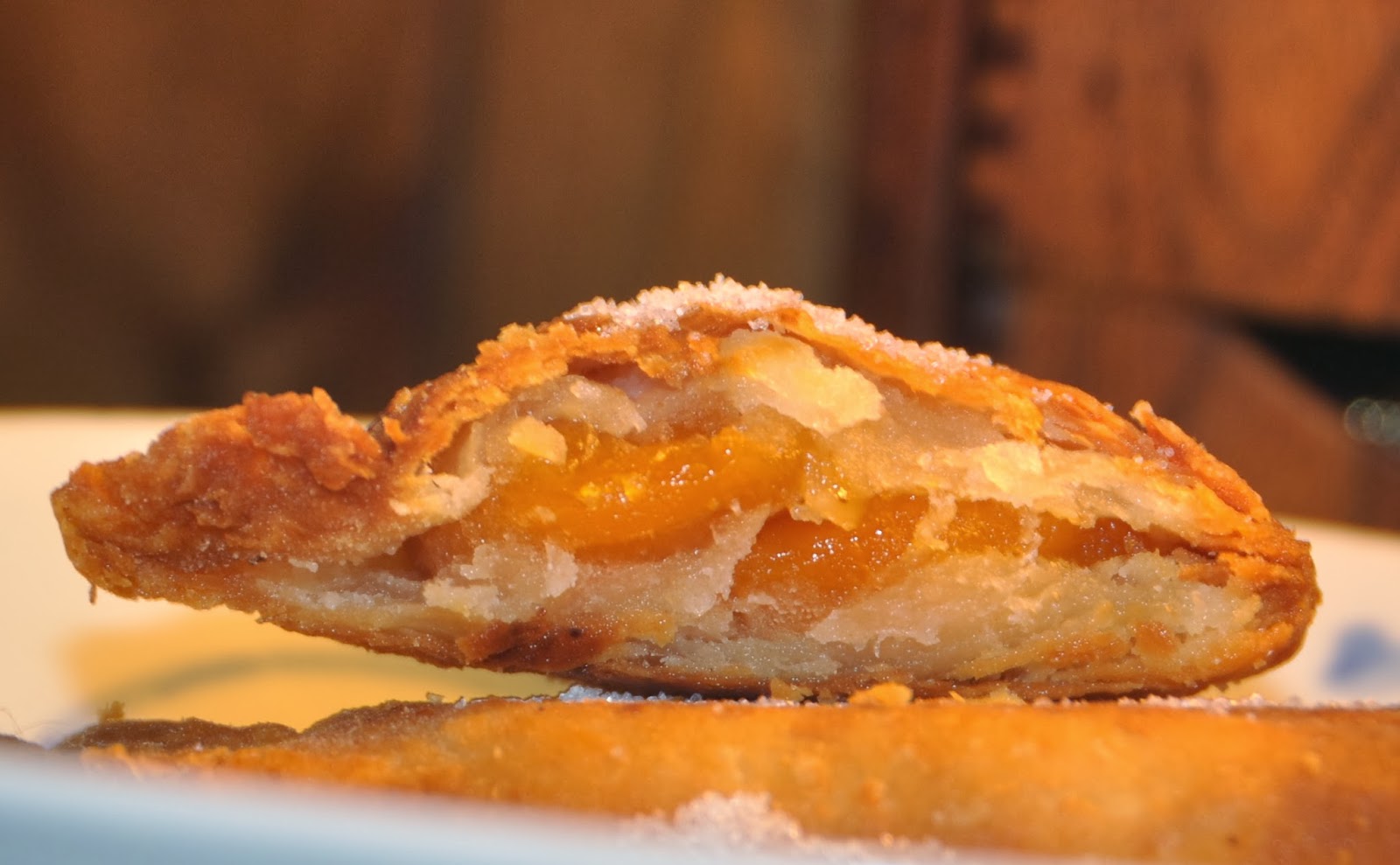 Oh, my mouth is watering! I think I know what I'll be doing tomorrow...

Oh my is right! Sure wish you could share that with me right about now!

What a lovely sounding treat. Thanks...and I noticed the last time I used Crisco it was full of vegetable oils, not a drop of lard left.

I can only imagine them hot, out of the oven, with freshly brewed coffee. In the first photo, are those fish bowls?? I no longer remember where we got them, maybe Pier One about 30 years ago, but we have 6 of them and use them all the time. It is like parallel lives, finding someone else with so similar existence, stuff, philosophies, love of books and on and on. Cheers
Mary Anne in Cosby

Yes, those are fish bowls, Mary Anne -- we've had them roughly forever.

why Vicki...I think you are just about the perfect woman
looks delish

Oh what a yummy vision on a cold and snowy January day! Vicki, you've convinced me to buy some Crisco...for the first time this century. True.

This is how we know you're a real mountain woman. O mercy--fried pies. And a nice simple recipe, too. You are a wonder, Mz Vicki.

Nothing, except maybe lard, can make pastry as flaky as Crisco does. And actually, recent studies are saying that lard isn't all that bad for you. Back when we raised two pigs every year and butchered them, I made lard and it's amazing how good the pastry was.

The recipe made 18 pies -- I stuck most of them in the freezer unfried and will be bringing them out to fry this weekend. I'll let you know how that goes.

The smell alone would be worth the effort. Great idea for a cold winter's day.

I don't remember the last time I had one. Don't know if anybody makes um down here in San Diego County but I am gonna look. I do remember fried apple pies and fried peach ones also. I'll take mine hot with a big scoop of Vanilla ice cream melting.

Oh those look delicious, and did I mention apricot is my favorite pie?

We have several Mennonite ladies that make them, unfortunately they aren't real close, or maybe I should say fortunately!

They look lucious!!! Apricot pie is my favorite. But I haven't had it in decades. I could do this!

I'm not sure if my digestive system would handle these, today. But they look delicious, Vicki.

I could make these to eat beside the snow cream you told me about! I can't wait to try them both:)

Mm, I'll bet the fragrance in your kitchen was wonderful too.

Heavens above. Now I’ve seen it all.

Fried pies. deep fried at that.
I find ordinary baked pies very hard to digest, what would my stomach say to a fried pie?

Oh my gosh, I am in a mental fried pie swoon! I want one right this very minute. I can't remember the last time I ate a fried pie. But I remember a friend once having this iron thing with a handle, you'd stick into your fireplace and cook the pie that way. So I guess not really fried, but sort of like that... very good, in any case! I have to ask, it's going to keep me up at night wondering - why do you put the fork into cold water?

It's supposed to make the pastry seal better, I guess.