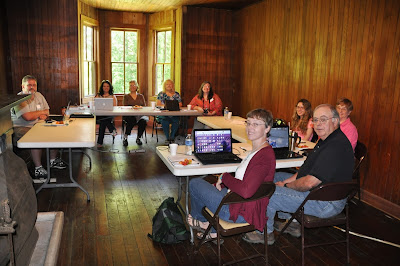 I'm having trouble again trying to upload photos to Blogger -- or anywhere else for that matter. I'm pretty sure the fault lies with our server as when I was in the motel Sunday night, things were much faster. Plus, I posted this last night at midnight and then it disappeared. Arrgh!

Howsomever -- it was a great class and a wonderful bunch of writers (one is missing from this photo.)  We met in one of Rugby's historic buildings -- a house  built for the founder's mother -- and started in after supper on Friday night with homework for the next morning. Then we worked all day Saturday, with breaks for meals and snacks, lots of Vicki talking, several in class writing assignments on the topics I'd been talking about (setting, character, dialogue, etc.) then reading aloud what they'd written.

Saturday night after supper we met in the parlor of the house (originally a boarding house in the 1800s) where some of us were staying for a discussion on plotting  -- and a glass of wine.

On Sunday, with breaks for more meals and snacks (homemade blueberry muffins with wild blueberries picked right there in Rugby was one of the snacks!) we tried to pull together the elements each writer had been working with and each writer was encouraged to come up with a basic storyline for his/her novel.

And we talked about finding agents, getting published, self-publishing, and whatever they wanted to know that I could answer. Finally at three, we were all exhausted -- at least I was and most of them seemed to be drooping a bit.

It's hard to cram what I might teach in a week into a weekend.  But they all did a great job and I left feeling that my work there was done.

And looking forward to some time in the future when I receive the first email  from one of these writers telling me they've completed their novel!

I do hope your server gets better able to let those wonderful photos of yours come through again!

I haven't completed a novel, but I sure did enjoy the weekend. Good job, Vicki! Jim