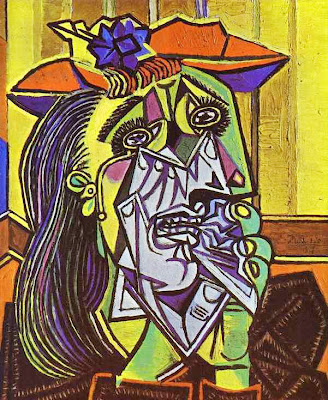 Picasso's "Weeping Woman" pretty well depicts the way I've felt for the past 24 hours except that my hands have been red instead of green. And well basted with hydrocortisone cream to boot. 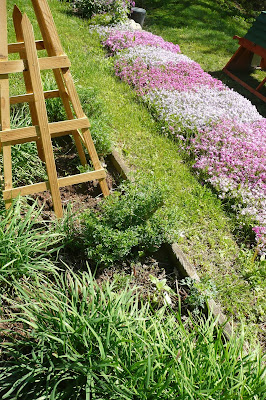 It was sunny and hot on Friday but I was determined to clean up my little box garden. As I attacked the last of the boxes, I discovered that the rue  -- a herb I planted for its literary links and its looks rather than its medicinal qualities -- needed pruning as it had gone from this modest little shrub seen here in the spring to a giant unwieldy mass that was shading out the cherry tomato planted in the tuteur.

I remembered vaguely that rue was said to act as an irritant to some people but I've handled it before without ill effect so I plunged ahead with my pruning shears (and without gloves,) cutting back the sprawling monster to allow the tomato some sun and breathing space and dragging out the severed branches to dispose of.

Early the next morning I awakened with my hand on fire with itching -- pretty much like poison ivy. Lots of red patches and a few blisters -- arrgh!

An internet search revealed what I hadn't known -- the combination of hot sunlight and the oils of the rue plant are what cause the dermatitis in some people.

And now I know that I'm one of those people. 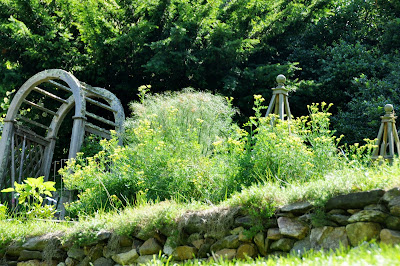 Poor thing ! I do hope you're feeling better soon , it sounds ghastly .
I wonder if soaking your hands in some cool water that you've steeped a small amount of fine oatmeal in might help ? It worked for the children's chickenpox itchiness , blisters and all .
( Meanwhile ,My grandmother always said that itchy palms meant a sudden windfall of cash . )

I feel for you. I'm highly allergic to a lot of things in the yard, including the chigger bites that are all over me from visiting a friend's pretty wooded property where she and her husband are building a new home. Finally had to go to the doctor for cream. Hang in there is what I was told, but I've been "hanging" for almost a week and still scratching...
Sam

Oh, I am sorry! Having painful hands has to be among the most uncomfortable disabilities.

On the other hand, now we know the origin of the name, don't we!

Oh, I'm so sorry! Something causes me the same thing in our yard. Nothing over the counter helped, so I finally fessed up to the dermatologist. Knock on wood the new cream Flurosomething is stopping the blisters that form from becoming a raging rash. So far.

oh my...now that does not sound fun at all...ack....is it like poison oak...if so i am so sorry...went through a really bad batch of that all over a couple years ago...blech

SOrry to hear of your ruefull condition. Be well soon.

I do hope the irritation is short-lived. What a bummer! Aren't you glad no one said you might rue the day your planted it? :)

Oh dear, that sounds terrible. Hope it soon cools down and heals up.

Cold water helps for a time -- and then the hydrocortisone goes on and it helps. Still itching but I can deal with it so far.

I definitely rue the day I didn't wear gloves ... (NCMountainwoman, you beat Martin to the punch on that one)