I grew up reading about Mars -- H.G. Wells's War of the Worlds, Robert Heinlein's Stranger in a Strange Land, Ray Bradbury's The Martian Chronicles come to mind. All those fantastic and, in Bradbury's case, poetic evocations of another planet with other forms of life seemed so real and infinitely preferable to what turns out to be the dull reality.
NASA's Pathfinder tells us there are no canals, no towering spires, no shifting ghosts, and gliding creatures. (No monsters bent on destroying Earth with a death ray, either; so that's good.) 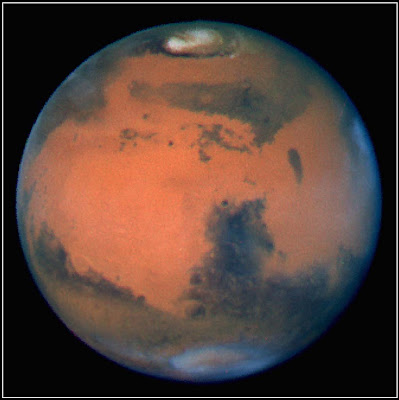 I didn't take this picture; it's from the NSSDC website .

But I wanted to alert you to an upcoming/ongoing event. (Nancy M. sent me the following, after my post on the Perseids.)

The Red Planet is about to be spectacular! This month and next, Earth is catching up with Mars in an encounter that will culminate in the closest approach between the two planets in recorded history. The next time Mars may come this close is in 2287. Due to the way Jupiter's gravity tugs on Mars and perturbs its orbit, astronomers can only be certain that Mars has not come this close to Earth in the last 5,000 years, but it may be as long as 60,000 years before it happens again.

The encounter will culminate on August 27th when Mars comes to within 34,649,589 miles of Earth and will be (next to the moon) the brightest object in the night sky. At a modest 75-power magnification Mars will look as large as the full moon to the naked eye.

Mars will be easy to spot. At the beginning of August it will rise in the east at 10p.m. and reach its azimuth at about 3 a.m. By the end of August when the two planets are closest, Mars will rise at nightfall and reach its highest point in the sky at 12:30a.m.

That's pretty convenient to see something that no human being has seen in recorded history. So, mark your calendar at the beginning of August to see Mars grow progressively brighter and brighter throughout the month.

NO ONE ALIVE TODAY WILL EVER SEE THIS AGAIN

If that's not enough excitement for you, check out this really so-bad-that-it's good B-movie: Mars Needs Women

EEEK! I've just found out that the info about the close encounter is false! (See comment below) As always, it's good to check snopes.com -- but I didn't. Mea culpa.

I'm going to go stand in the corner for a while.

Wow Vicki, you come up with the neatest things! This is certainly worth checking out. Thanks!!

Turns out this is a story that circulates on the Internet frequently but is NOT happening now.

Well, I got excited about it! I was all set to check it out tonight. :-) Dang. Please come out of the corner soon, all is forgiven. ;-) I also wanted to comment on your idea for the Mulengeon (Not spelled right, I think)Jew. It sounds like a great starter story, as I admit I've always been fascinated by these people. Your mind is awash with ideas, and I love how you find stories everywhere! GO VICKI GO! :-)
Tammy

Glad you like the Jewish Melungeon idea. I think it has possibilities. We'll see what Herself the editor thinks, once I'm done with Miss Birdie and with the next Elizabeth book.

Well Vicki, as nice as that would have been to see, guess I'll just go out and do some stargazing. We've had some nice clear nights here lately.

"For of all sad words of tongue or pen,
The saddest are these: 'It might have been!" ~ John Greenleaf Whittier said that.

Omg I was so excited by your post and linking everyone to it and then I read the end of your post. D: It was exciting anyways!!!

And that's how these things get perpetuated on the Internet -- the terminally ill child who wants postcards, the sister-in-law who warded off a heart attack with a dryer sheet (I made that one up -- DO NOT BELIEVE IT!)

I'm as guilty as the next one for forwarding stuff without making sure it's actually true.

But I'm taking a vow. Always check with snopes.com (debunker of urban myths)first!