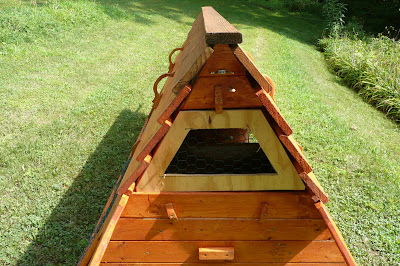 For those of you following the saga of the chicken tractor -- two updates. John added upstairs ventilation as the weather is so warm. These plywood and chicken wire panels replace the solid ones of the original design (which, being English, didn't have to worry about the kind of heat we're having.) It also lets a bit of light into the upstairs which we had hoped would encourage the chicks to put themselves to bed when dusk came, as is (or should be) their natural roosting behavior. 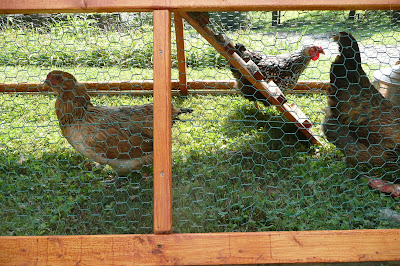 Only it didn't. They didn't. We tried putting them up there several times after dark but it was always the same -- the next night they would just pile up in a heap on the grass at one end of the tractor. So we decided to put three of the older hens in the tractor and the babies in the old chicken coop. (Susan B. had worried about the chickens having room to move and I can say that three full grown hens seem just fine. I think we could add one or two more -- but probably not the rooster because he's so tall.)

The plan is to keep these three girls on the garden tier till they scratch down to bare dirt. We'll see how long it takes them to 'till' up the dirt -- then we'll move the tractor.

The biddies, meanwhile, are having a ball exploring the chicken yard. But last night they just piled up in a heap outside and we had to go down and put them in the chicken house.

I hope they get the hang of this pretty soon. 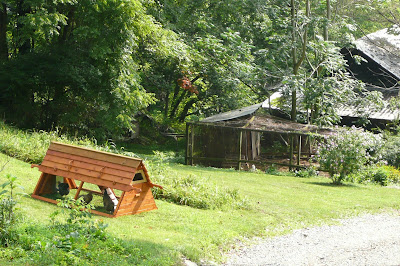 But wait . . . there's more. Down in the garden this morning, after picking beans and corn, I decided to pull a few weeds out of the asparagus bed. Halfway through, I got to a very overgrown bit where morning glory vines were making a jungle. I stuck my hand into the midst of the the vines and leaves, ready to pull them up, and out shot a snake. I leaped backward, letting out the sort of straight-from-the-gut primal scream that it would probably take thousands of dollars and years of therapy to achieve.

It was a good-sized copperhead on top of the rock wall, lying there and staring at me. If I'd had a hoe, I would have tried to kill him -- I'd have felt bad about it, especially since he had been kind enough not to bite me, but I would much prefer no copperheads in the garden.

But since I didn't have a hoe, I reached for my camera. Unfortunately, as soon as I did that, the snake slid back into the morning glory jungle. Morning glories which, I suspect, are going to be left to achieve their full potential.

Yes, a copperhead brings out the primal scream in me too, but oddly enough, the one rattler I ever saw left me totally speechless and running to the house like a crazy person. UGH ... I simply don't like snakes!

This is the first copperhead I've seen on our place in about 15 years -- and absolutely the closest I've ever been to one. It brings a new meaning to mindful living -- I am really paying attention where I put my hand (or foot or anything else) now.

Just back from checking on things in the chicken world and . . . the chicks have put themselves into the chicken house on their own! And the hens have found the upstairs roost in the chicken tractor!

Oh Vicki.........a narrow escape!! Scarier, really than the 18-wheeler who doesn't see my little red car and wants my space on the highway1 So glad for all of us that Mr. Copper refrained!
Chickens............well, in the middle of the city, the neighbor of a friend a block away has 4......my friend thinks the IDEA of chickens, fresh-laid eggs and such is great, she is nearly driven nuts by the close proximity of "bruuuuuck, bruuuck" when the chickens are in that sustained state.
Oh yes, and the photos of the delectable tomatoes were the perfect accompaniment (sp?) to the recipe. I really need the visual, as well as your great description, to give me the ooompf to dive in.
Thanks

Copperhead bites are rarely fatal -- but they are very, very painful -- or so a friend of mine who was bitten tells me. I'm real happy to escape that.

Re chicken noise -- I'd probably feel the same way about sustained traffic sounds.

Oh wow, Vickie, I'm glad you didn't get bitten! Copperheads are scary to look at even. As kids we were sure their bite was fatal, so when my cousin Debbie Sue stepped on one and got bitten on her way to the milk barn, we were planning her funeral. (just like the time she got bitten by a stray kitten and we were sure she was going to get rabies, but of course didn't tell any adults because we would 'get in trouble'. That was a long 10 days(not sure why ten days was the magic number) we waited, looking for signs of 'hydrophoby'. Poor Debbie Sue... Anyway, we don't want you to get bitten...keep those fingers safe and in good typing condition! ;-) Take care,
Tammy

Glad you didn't get bit, even if Copperheads aren't usually fatal. (A fact I didn't know until now. I thought they were extremely fatal.)