Stories Waiting To Be Told 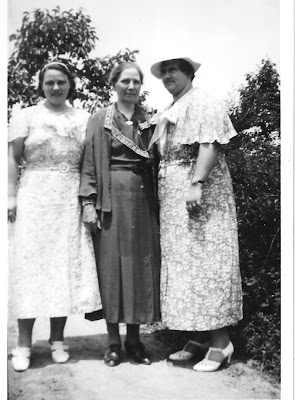 When I spoke at Malaprops' last Saturday, Nancy M. (who lent me the wonderful diaries kept by her aunts Odessa and Inez) brought me pictures of the two, as well as of their parents and some schoolmates. Each of these photos sets my mind going -- the thin little woman with her two big daughters on either side -- all in their best finery. I know from the diaries how hard these women worked and it's nice to think of them all dolled up for a picture. I'm wondering about their ages -- girls in their twenties, Mama late forties maybe? (Nancy, help me out here!) And what was Mama's name? 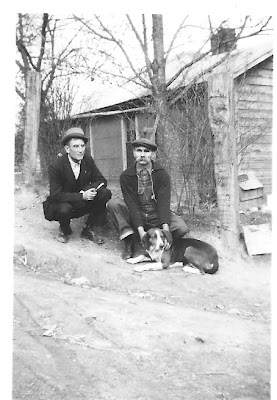 I'm in love with all three of these -- from the beautiful hound to the dude in the suit who can hunker like Clint Eastwood (is that a Bible in his hand?) to the handsome fella with the wonderful mustache -- Nancy's granddaddy looks like a charmer. 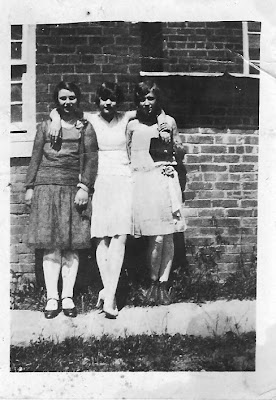 And this stylish trio at Walnut School -- Odessa, Christine and Eloise. Notice the difference in footwear and poses -- do you think Christine was something of a minx? And I'll bet Eloise hated her shoes.

Three stories, waiting to be told -- maybe as part of Miss Birdie's story. Many thanks, Nancy!


(Later )-Nancy has just sent me the following: "Grandma was Tennie Etta (Treadway) and she was born in 1878. Odessa was born in 1914, Inez in 1916 so I believe in this picture (which was probably around 1935) Odessa would be 23, Inez 21 and Grandma 57. Granddaddy (Paul Victor Henderson) was born in 1876. So they had their children in their 30's - late for back then - but they married late.
Daddy (Edgar William - Brother in the diaries) was born in 1917. I don't know who the man is with Granddaddy but believe (since I agree with you that's a bible in his hand) would be the preacher of the Walnut Presbyterian Church - who always came to Sunday dinner. You notice that Granddaddy had his overalls on - he wore those to church but he would put a tie on which came off as soon as he cleared the church door! The house behind them still stands. If you go out Academy Road, go left when the road forks, the house is the next one down on the left. I don't know if the garage and barn (on the right) are still standing or not. Granddaddy built that house. You can also see it when you turn off of 25 toward Walnut and look to your left across the holler - before you start up the hill to turn into Walnut.
Grandma died in 1973 at the age of 95; Granddaddy in 1951 at the age of 75. Odessa and Inez always got dressed up like that on Sundays for church, for any funeral (and they went to them all!!) and for going to Asheville on Saturdays but since Grandma has on a nice dress (not what she called her "house dress") that it's a Sunday.

I love these old photos. Everybody has them and almost no one writes much information on the backs. Since I've gotten interested in genealogy, I spend hours looking at old family photos hoping to find clues that will give me dates, names, anything...

Nancy is lucky, she seems to have quite a bit of detail with her photos.

I think the gentleman in the suit is holding a pipe? He looks a little like Edward Everett Horton to me. The granddad is indeed a handsome fellow and his hound looks like a good'un.

I like this photo so much I launched into what is either a short story or a chapter in the new book, based on these three.

When my husbands mother passed away there were many photo albums that none of his siblings wanted, so we instantly snatched them up ... he does remember the who/what/where of some of them, but not a whole lot, and now there is no one to help us out being as all of her siblings/extended family members are gone. Oh how we wish his mother would have shared with us, but out of sight/out of mind I guess.

I enjoy looking through them from time to time.

My mother was the "black sheep" of her family, so she really didn't have any old photos. They all went to her sisters and brother. I think that is why I love to look at other people's old photos. (And why I like to buy old photos at flea markets and thrift stores.) Nancy's are great and I may use them as prompts for my writers group. We've come up with some great poems and stories based on photos.

I love the idea of the scrapbook you said you have. What a treasure.

Absolutely, these are great writing prompts! Granddaddy, the preacher man, and the hound are the inspiration for my almost-finished story (or maybe chapter)called The Bargain. And that's no preacher man.

I find it impossible to open the tub of old family photos and not see some detail I missed before even though I've seen every photo dozens of times. One can easily time travel an entire afternoon away and have a wonderful time doing it!