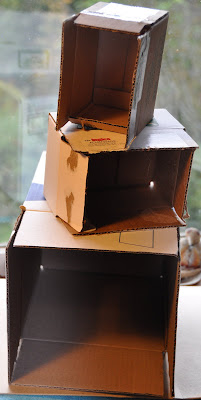 . . . and other annoying expressions.


At lunch in Cedar Mountain last week, the talk turned to annoying expressions and someone mentioned "thinking outside the box" as a phrase she was tired of hearing. Someone else mentioned "Whatever" and I think "at the end of the day" and "at this point in time" were others.

I'm not crazy about "Whatever" as a response (though I'm sure I'm guilty of using it.) Turns out I'm not alone. The email newsletter World Wide Words mentions it as the single most annoying phrase according to a survey of Americans.

Of course, these annoying little catch phrases are infinitely useful to a writer. They're a way of making a character's voice unique -- just as my editor suggested having Sallie Kate, Elizabeth's realtor friend call people "Honey."

"You know" is another odd conversational tic that a lot of folks drop in every few words, as if trying to make sure you're listening. Or "You know what I'm sayin'?"

"Awesome," I've noticed, is a kind of all purpose positive response for all kinds of things, as in:
"I mailed that letter for you, Ashley."
"Awesome." 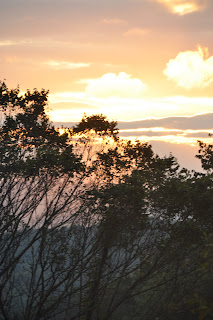 Kind of takes the oomph out of what used to be a powerful word. Awesome should have been left for the Grand Canyon, the ocean, a volcano's eruption, God's hand reaching down from the clouds . . .

Just like "wonderful" -- are all those things I've called "wonderful" really full of wonder?

Oh, well, nothing worse than an old English teacher /curmudgeon.

Or, as some might say, "Whatever floats your boat."

The Internet Radio interview I did Friday is available for listening here. My goodness, I say umm a lot.
Posted by Vicki Lane at 1:44 AM

You're not alone. 'Firming up', 'blue-sky thinking' and 'going forward' (is there any other direction?) are among those I don't miss.

Listened to your interview and thought you came over as a complete natural. I was once interviewed (live) for BBC local radio and it was quite nerve-wracking.

Yep, business jargon is particularly annoying (I just typed awful and realized that there was another good word demoted.)

And when you say that I came over as a complete natural -- I do hope that you didn't mean it in the colloquial sense of a simple-minded person. ;-)
(Though I realize that my southern accent might have that effect, especially on a crisp-speaking Brit.)

Hi Vicki, it is really interesting to read this post. Ireland has a totally different set of annoying words, phrases and in fact most of the people here speak, write and use a colloquial English, very different from the Queens English and different again to your English.Hugs, Margie.

I just listened and can't remember a single "um." You sounded lovely, warm, gracious, and thoughtful. One comment you made caught my attention - the not making much money at it. How does a publisher decide to go to hardcover from someone who has been, like you, only in paperback? Is there a number of copies sold that makes that leap? I would think that the Anthony nomination would help fuel that leap.

No, I meant that you sounded very much at ease in front of the microphone. A natural at conversation.

I only listen to what the person is saying. An interesting accent is a bonus. In the past, Received Pronunciation has been the curse of our broadcasting media in the UK. Thankfully, regional accents are far more prevalent now.

Oh well, whatever, Vicki. They ain't gonna go away, these words and phrases. Speaking of Irish, I got an email last night from a 3rd cousin, of the Irish Fry line, who now lives in Melbourne, Australia. I wonder what the Aussie words are that people find maddening.

Margie -- Accents are so wonderful -- and to my ears, an Irish accent is particularly pleasing.

Karen -- As a Southern Lady, I shouldn't have even mentioned M_n_y, but so many folks just assume that any one with a few books published is undoubtedly making BIG BUCKS. So it's my mission to disabuse them of that quaint notion.

As to how a publisher decides to go to hardcover, I assume it must have something to do with the writer's numbers -- i.e. books sold.

I assume that I am in mass market paperback so that my books are affordable to those who might not otherwise take a chance on an unknown writer. And in today's economic climate, paperback may continue to be the best for me.

Just guessing -- the ways of the publishing world are baffling to me. As to the Anthony nomination helping -- you would think so. But there've been Anthony nominated series that were dropped by their publishers due to inadequate sales.

It all come down to another annoying expression -- THE BOTTOM LINE.

I was teasing you, Martin -- I was sure you meant I sounded at ease and I should have just thanked you prettily. But the other meaning was what leapt out at me -- I think in O'Brian's Aubrey-Maturin books, the doctor's autistic daughter is called 'a little natural' by one of the Westcountry men of the crew. Couldn't resist.

Kay -- What Aussies probably object to is the way we stereotype their speech -- G'day, shrimps on the barbie, and the like. (Though they exploit this themselves in their travel ads.)

Hi Vicki,
One that I'm having particular trouble with is the term 'old school'. As in that is so 'old school' referring to how something has been done. It's said in a smirky way as well. Like 'old school' is stupid and useless. Of course I work with a younger generation that thinks they have allll the answers. I just want to tell them, that what they are coming up will be so 'old school' in like five minutes from now! ;-) As for your books.., I never see your books at clearance house books, used book stores, or the paperbackswap! ha... So I think people are holding on to the ones they buy. (Which says allot, I think)
Tammy

I need a good dictionary to translate these idiomatic expressions !

I was very pleased to hear your voice!(but difficult for me to understand the whole interview...)
You don't say "Ummm a lot!
So you are also a quilter and a painter ...
I love that you wrote aboutThe indians on my last post.

Tammy -- I think I've only heard 'old school' used by people in their twenties. With a smirk, as you say.

Miss Yves -- You are valiant to struggle through these posts. We both are learning but you are much, much farther along than I!

I loved the interview!

I have no doubt that the people who made "whatever" the most despised word are (or were) parents of pre-teens and/or teenagers.

As for the other words, I caught my staff playing "buzzword bingo" when they were listening to a guest speaker. All those overused phrases were listed and checked off as the speaker uttered them. The winner hit on "breaking down silos."

Isn't "Whatever" a perfect word for teens? So glad my boys got through those years before that expression became ubiquitous!

And I adore the idea of Buzzword Bingo!

I really enjoyed listening to the interview, Vicki, and it was so nice to hear your voice. I got a kick out of your "5 year plan," lol.

The use of the word 'awesome' to describe something trite is one of my pet peeves. I agree that it should be reserved for things and events that are truly filled with awe.

Hey, what can I say of the five year plan except that we're coming up on our 46th wedding anniversary.

thank you for the little excursion to peculiar phrases. being a german and portuguese native speaker i keep wondering about the "you know" phrase which is frequently used here in ireland. my brain yells "what am i supposed to know???!!!!" and my boys keep translating it into their german conversation which sounds even more weird, you know... i used to have a history teacher who was constantly saying ummmmm, like a buddhist's mantra, we started to count her ummmmms and if i remember it correctly she once spoke her 137th ummmm at the end of a lesson. at least it became entertainung for us. - nice word below here: lenipsy, we could introduce it to our next conversation....

Great idea, counting the ummm's! But I'm sorry to hear that 'you know' has made it to Ireland . . . and now in German!

Lenipsy -- sound like a disease -- maybe one that causes the victim to laugh uncontrollably.

I enjoyed listening to your interview – you do have a soft southern accent which is very nice. I do not like the word “awesome” too and if I say something and someone answers “awesome” I usually cannot speak anymore. Another word I noticed, mostly used in restaurant by waiters is “excellent” as if I say “I think I’ll have the lasagna” and the waiter replies: “excellent!”but with the accent sounding like exxxxx cellent.

Not that I go to that many restaurants, but at some points "you guys' seemed to become the standard way of addressing customers. I almost think I preferred 'honey.'

But pity the poor waitperson -- one customers likes casual intimacy, another prefers an aloof distance -- and how is said waitperson to know?

I wouldn't want the job -- a good waitperson has to have massive physical endurance as well as being a bit of an analytical psychologist.

I have a good friend who hates the way waitpersons say, "Enjoy."

Another who hates "Are you still working on that?" (I think David Sedaris did a good bit on that phrase.