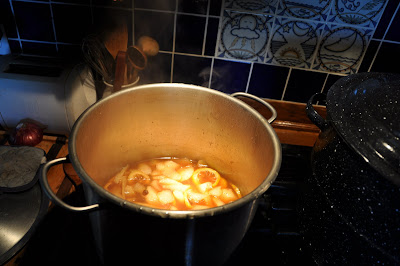 "Smells like Fall," my husband said as he walked into the kitchen where I was cooking up a batch of Mincemeat Flavored Pears. Cinnamon, nutmeg, ginger, allspice, cloves, and a hint of lemon -- yummm!

I managed to wrest a few pears away from the hornets and yellow jackets so I could make a little run of this delicious stuff -- a family favorite for many years. 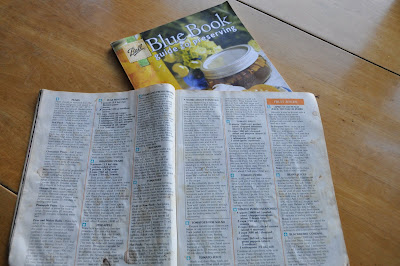 The Ball Blue Book -- Home Guide to Canning and Freezing is my source. (I have a more recent one as back up-- when the pages of the old one grow too food-spattered to read.) I kind of combine two recipes to make this.

It's easy to do -- peel and slice up your pears (about seven pounds, more or less; I use Keiffer pears because that's what we have,) put in a pot with four cups water and four cups sugar (brown sugar, again because that's what I had), raisins, 3 lemons, in de-seeded slices,a cup of vinegar (cider vinegar, for choice) and a tablespoon each of cinnamon, cloves, nutmeg, allspice, and ground ginger. Bring to a boil and simmer forty minutes, put into hot clean canning jars, seal with new lids, and process in a boiling water bath for 25 minutes. 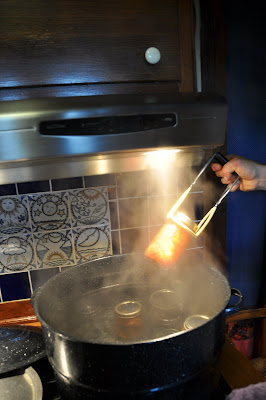 And there they are -- a taste of fall. 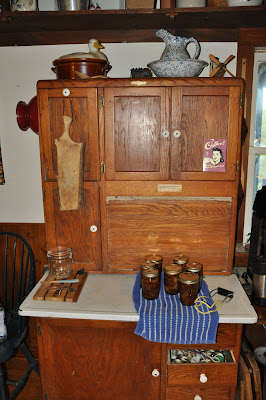 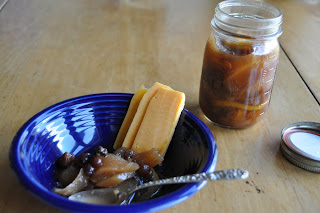 They make a fine dessert, paired (ouch, what a pun) with sharp cheddar. 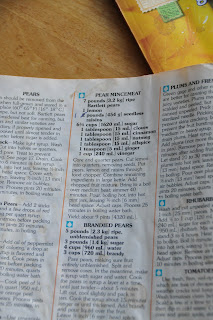 You can enlarge the picture to read the recipes I used.

I can smell your pears cooking on the stove from here. I'll be right over for breakfast. Save a piece of that good cheddar for me.
Sam

Sounds delish! I'll have mine with some hot biscuits! Are you going to make Cider?

Thia is great stuff -- we usually save it for dessert but it's right fine with hot sausage patties too.

No cider this year, Carol. We had almost no apples. If we'd been more on top of things, we could have made perry with all those pears -- but we didn't.

Vicki, I wish I were your neighbour! Its amazing, how you can write so well and at the same time have time to do all those lovely meals! Since I am living by myself, I don't spend much time in the kitchen, though I cook every day! When I get visitors I do my best to cook a nice meal.

Vicki, I just got back from the store with rutabaga, carrots, sweet potatoes and plan to make Lynn Rosseto Casper's fall root veggie soup. I get her email recipes every week. I'll let you know if it works.
I grew up with old-fashioned pear trees around and every late summer my mother would make pear preserves and cobbler. I wish I had some of these pears right now. I'd try your recipe. I've also a recipe for Tuscan butternut and tomato stew. Wanna try that one, too, as soon as I can. I think my favorite foods are slow-cooked ones. Maybe it's a form of kitchen meditation?

I wish you were my neighbor, Wil!

(If I lived alone, I wouldn't cook nearly so much.)

Oh, Kay, those all sound wonderful!

Have you done a book on kitchen meditations?

Looks and smells! wonderful, Vicki. I love the homely things that you and your husband do. It's those sorts of things that make life special.
BLessings, Star

Thank you, Star -- to me there's something about basic things like cooking or splitting wood or gathering eggs of pulling weeds that is, indeed, a kind of homely sacrament.

Ooooooooo, I'd love a spoonful right now,
with a small wedge of old cheddar (no decent one to be found here)!

I didn't use any brandy but hope to next time!

...and then you came over to our house to share in a discussion of your book with Hell and Highwater Book Club. We were all thrilled to get to talk to the author of our October's selection, "Signs in the Blood." I'm amazed that you did all that canning before you came over. After a big Friday night, too.
Deana

No Superwoman here, Deana. Those were pictures from Thursday evening.

I had a great time with your group! It's a pleasure to talk with people who think about what the read. Thanks so much for inviting me.

It'll probably be Tuesday before I post about my visit to your place.

Hi Vicki and Deena, I'll do my part as Poet Laureate Emerita and urge your book club to read a book of poetry now and then! I know you'd really enjoy some of our mountain poets.
When I fixed a small portion of this dish last night, I used some white wine. No brandy in the house. Darn.
K.

Oh, yes, Deana -- you all would probably really enjoy Kay's BLACK SHAWL or Diane Gilliam Fisher's KETTLE BOTTOM, to name just two. Both have a lind of linked narrative that makes them read like a novel.