Esmeralda and the Brown Brachet--Chapter 3 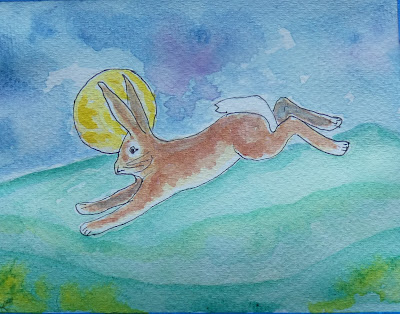 Chapter 3 (Chapters 1 and 2 are here earlier on the blog. Key word- Esmeralda)

Over bramble infested hills, through soggy, boggy valleys, with the occasional detour when the brachet scented a rabbit, Esmeralda trudged. The armlet bit into her tender flesh if she ceased to follow the brachet and only loosened when the little hound was in sight.  Esmeralda was near to dropping from hunger and exhaustion when at last the brachet stopped to drink from a sparkling stream and then nudged meaningfully at the leathern pouch.

With a sigh of with relief, Esmeralda sank onto the grassy bank and opened the pouch. What good fortune that it was under a Spell of Plenty and could produce endless provisions for herself and this annoying creature.

The annoying creature had swallowed the dried meat and hard rolls then circled thrice in the long grass and with a weary little whine had dropped into a tight curl and closed her eyes.

Esmeralda chewed doggedly on her own hard roll and tough venison, hoping she wouldn’t break a tooth—was this why they called them iron rations? she wondered. And why couldn’t the Pouch of Plenty occasionally serve up a slice of pizza?

It had all seemed so simple when she set out—the Sooth-Seer had appeared at the castle gate demanding to speak to the Queen's daughter. Her mother the Queen had been thrilled—all Esmeralda’s sisters had found their princes; her three brothers were off questing (at least that’s what they’d said as they appropriated all the castle’s best steeds,) and she was left at home to endure her mother’s ceaseless talk of The Olden Days and how, with the help of a Magickal flower she had saved the King (or Prince as he was then) from a ravening Ten-eyed Terror—how many times had Esmeralda heard the story! 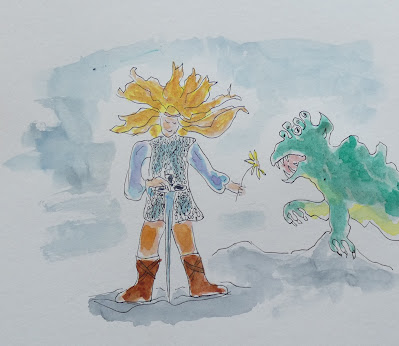 “And we were wed the next day,” the story always concluded triumphantly. “Of course, I was the Fairest of the Fair—everyone agreed. Cutest little trick in chain mail back then. And there were other princes more handsome who would gladly have had me to wed but-” here the Queen would slowly close one eye, “Your father was so grateful. And has continued so. I would never marry a man—be he never so royal- who had rescued me.  The balance of power you know. Imagine having to spend your life deferring to your rescuer. No, my girl, you must wait for the proper opportunity.”

The Sooth-Seer was welcomed and, when she spoke of a noble prince from a nearby Queendom who had been captured by a trio of wicked Enchantresses and was even now languishing in a dank dungeon, Esmeralda’s mother could hardly contain her excitement. Showering the aged crone with gold, she bade her stay near while Esmeralda made ready for the journey. Sempstresses were summoned, the royal closets were rummaged. “I know my leathern Pouch of Plenty is in here and my Torch of Night Seeing . . . oh, this is so exciting, I almost wish I were going with you, my dear.”

“Nay, my lady,” the Sooth Seer had interposed. “She

must travel alone, but for such guides as may appear to

her.  The Enchanted Crystal,” the crone held out a gnarled hand, cupped to cradle a sparkling faceted sphere,” will show her the way.” 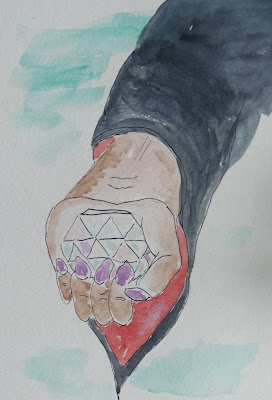 Email ThisBlogThis!Share to TwitterShare to FacebookShare to Pinterest
Labels: Esmeralda

Yay, a fairy tale! A true one, I would imagine...with lots of adventures Thanks!

I love this, Vicki.

Is this being told to granddaughter? Is that the ultimate goal? Is it for her? You may have said, but who can remember?

It is going to be told to Josie when I get a little farther along.