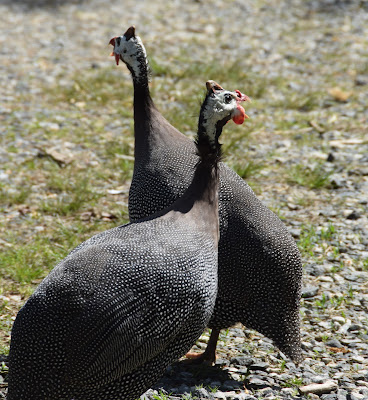 A few days ago I was out pulling some weeds along the driveway, enjoying the sun and the gentle sound of birdsong. 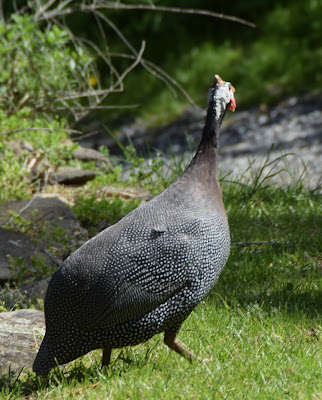 As I neared John's truck, a terrible sound arose. My first thought was that it was some Doomsday alarm, alerting passersby to the imminent explosion of the vehicle, and I reached for my phone to tell John about the problem and ask what I should do. 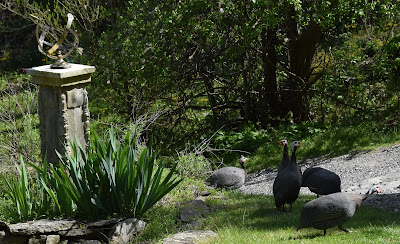 Then a confusion of guineas ran out from beneath the truck -- mostly males, as they make the harsh chi, chi, chi sound I was hearing, unlike the female's more gentle potterack? potterack? which I would have recognized. (Link HERE to a recording of guinea sounds.) 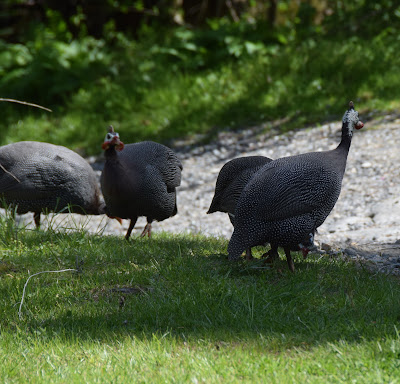 And yes, confusion is the accepted collective noun for these weird critters--but at least the truck didn't explode. 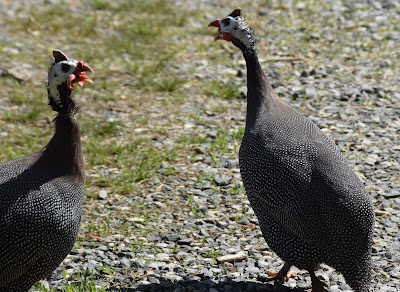 Email ThisBlogThis!Share to TwitterShare to FacebookShare to Pinterest
Labels: guineas

Glad the truck didn't explode or anything. Such strange heads on those fowl~!

They do look pretty weird. Kinda like turkeys, but not. I like that collective noun, too: "A confusion of guineas." So visual.

A confusion of guineas. I LOVE it!

Considering your pumpkin accident with a truck, I'm sure the doomsday alarm was a bit frightening. Those guinea fowl are giving all of us a short respite. Thanks

That must have been a pretty noisy sound they made for you to confuse it with an explosion! Also I envy you being outdoors – I have not been out of the house for 33 days or more.

That is certainly a fitting word to use for a group of those strange creatures. And their cries are also appropriate for sounding the Doomsday Alarm.