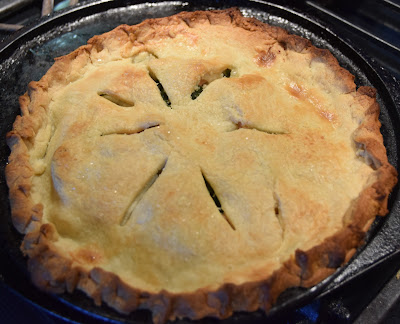 I've always been picky about piecrust, remembering my grandmother's flaky crusts, and I've always made my own from scratch--flour, Crisco, salt, and iced vodka (a recent substitute for water in the recipe.)

But after the Shaker Lemon Pie I wrote about recently, I wanted to try that butter-heavy crust again. So I decided to make a chicken pie--the way my grandmother did-- no veggies, just chicken and broth and wonderful pastry.

I mixed up the pastry in the morning so it would have time to chill. Then I checked out my grandmother's recipe and the foundations of my belief were shaken. SHAKEN, I tell you! 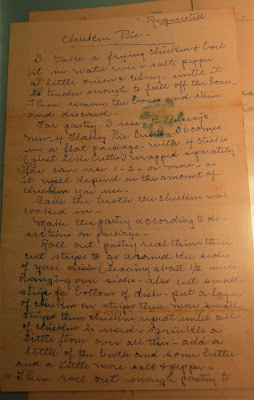 My beloved grandmother used pre-made pastry dough. Pilsbury's New 4 Flaky Pie Crusts, to be exact. "It comes in a flat package with four sticks (just like butter,)" she wrote.

I knew that in her later years, her biscuits had come out of a can (and were never as good as her scratch biscuits) but her pie crust?

Reeling with the shock, I decided to go for a walk. I took along a glove and a plastic bag, thinking to pick some stinging nettles to enliven a meal. 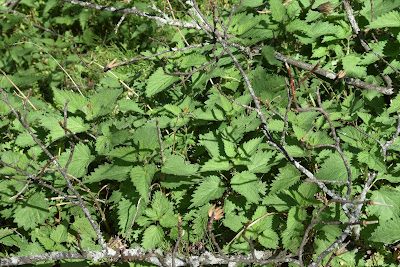 Which I did. And blanched them to take away the stinging part. 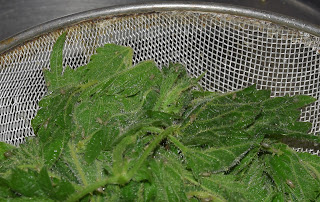 Then I made the chicken pie. At some point, realizing it was no longer my grandmother's chicken pie anyway, what with the lack of Pilsbury's 4 Flaky Pie Crusts, I decided to layer
some of the blanched nettles in with the chicken. 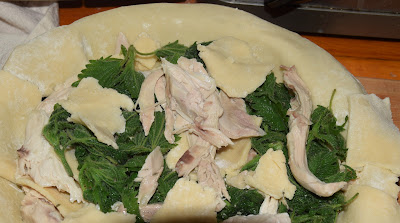 The finished product was beautiful.

And it tasted great - the nettles added a very mild flavor--slightly artichoke-ish. The pie scratched three itches -- wanting to make my grandmother's chicken pie, using that great butter crust recipe again, and including foraged nettles for a taste of Spring. 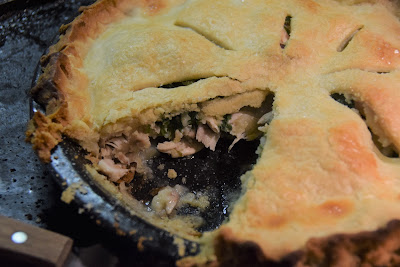 Stinging nettles in a pie! How shocking to me.

How delicious it sounds! And now you're the grandmother, with a new recipe (I hope you're keeping notes in some book somewhere) to pass along to the generations to come.

Is that your grandmother's handwriting? Wonderful....... and you have preserved it.

It is indeed her handwriting. I love seeing it.

This sounds delicious....I've never used stinging nettles in my cooking, but I believe it can be done. There are some growing on a slope on the east edge of my driveway that I've never completely eradicated.