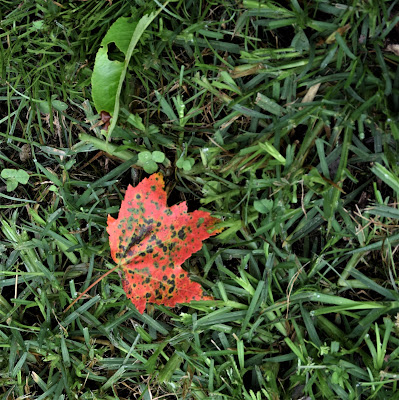 Yes, it's only early August. Fall is a long way off and we have weeks of hot weather ahead. There's still a bounty of summer fruit at the grocery -- peaches, cherries, blueberries, watermelon.  And our own tomatoes are finally ripening and there are tomato sandwiches to enjoy.

A rainstorm Wednesday night left cooler air behind as well as a spattering of early-turning maple leaves on the summer grass. The hay that will see our cows through the winter has been delivered and stored in whatever dry spaces John could find. Some of the garden is ready to plow under and sow in a cover crop. Inexorably, our thoughts turn to making ready for the cold months.

And I see a parallel to the stage of life in which I find myself. At seventy-five, I feel a sense of, not winding down, but winding up. It's not that I feel a diminishing but more that I'm aware that, sooner or later, an end is coming, and I'd like to be prepared.

Personally, John and I are in better health than we've been in a long time. But as we've both passed the age at which our parents died and as we've said goodbye to so many folks our age or younger, it's perhaps inevitable that these thoughts arise.

I don't find this depressing. On the contrary, it focuses the mind wonderfully on what's important, on living this  endgame time -- whether measured in days or months or years -- to the fullest.

Being aware of and prepared for what's to come (as prepared as one can be for the unknown)  is almost a cozy feeling, like looking forward to a fire in the fireplace on the long winter nights, like knowing that there's plenty of food in the pantry and, rather than railing against winter, settling in to enjoy it. 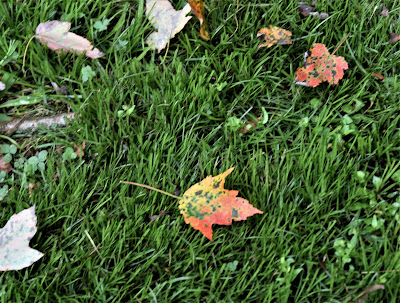 Beautifully said. Autumn can be a lovely and gentle season...on the land and in our lives.

I used to scoff at the psycho people saying the last stage (being elders) of life meant preparing for death and reviewing everything that had gone before. But it's kind of true. Glad to hear you all are in good health. My health problems take up a lot of my time. Here's wishing you many autumn years of continued joy and good health!

Psychologists, sociologists, not PSYCHO's as used in modern lingo!

We've had hints of autumn here. I look forward to it's cooler days. Wishing you a wonderful weekend!

Oh yes, as I watch my sister and brother battle stage 4 cancer I I have realized I too am preparing for the days that will find me facing what they are. It may not be cancer but it will be something. I have no fear, it's part of a natural life cycle and it's okay, I'm okay. xx

I'm in the Autumn of my years and yet I think of my life as vintage wine from fine old kegs. So goes the song and so goes my life. Nice post, Vicki.

Yes I feel the turning of the seasons. I have had 77 trips around the sun on mother earth. When it is time my ashes will return to the earth and I will have completed the cycle of life.

You’ve said this so well, Vicki. I’ve been having those exact feelings lately. A letting go and a gathering together all at the same time.

Yes, our autumn is here even if the seasonal autumn isn't. Our garden, however, is already beginning to wind down. Although there are plenty of Echinacea remaining, they are past their glorious peak already.