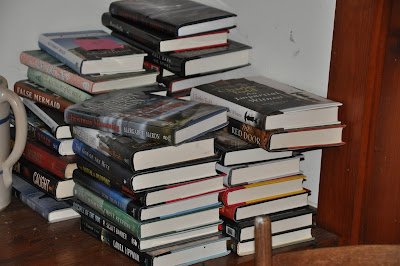 Yesterday being rainy and me with a cold, I found myself reorganizing several troublesome drawers and trying to get rid of the accumulation of little notebooks from past years. Jotted down addresses, brilliant ideas, good quotes, mysterious scribblings . . . a hodge-podge of stuff.

One notebook was from my time in rehab after my accident in October of 2016  -- during which time I did a lot of reading.

Two books that I read then were John Greene's The Fault in Our Stars and Jo Walton's Among Others. Both of these novels referenced numerous other books and authors and, having nothing better to do at the time, I made a list for future reference. In my little notebook. So today I moved the lists onto my computer and decided (fiendish chuckle) to share them with you.

If you make it through the lists, I'd be interested to hear if any of these particularly resonated with you. 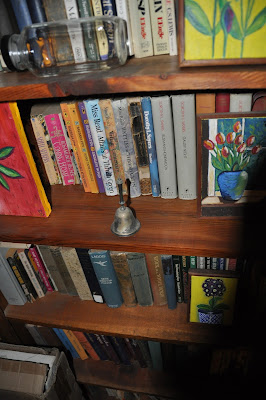 Mentioned in The Fault in Our Stars (a diverse and intriguing list many of which I have managed not to read --- yet)
His Dark Materials – Pullman (have read them all now and loved them)
Birdsong – Faulks
War and Peace - Tolstoy (groan)
Captain Corelli’s Mandolin – de Bernieres
Memoirs of a Geisha - Golden
One Hundred Years of Solitude – Marquez (embarrassed to say I haven't read any Marquez)
Atonement – McEwan (read and enjoyed, somewhat to my surprise)
A Suitable Boy - Seth
Shadow of the Wind – Zafur (on my bedside table)
Love in the Time of Cholera - Marquez
Midnight’s Children – Rushdie
Ulysses – Joyce
Germinal - Zola
Cloud Atlas – Mitchell (I keep thinking I want to read this but somehow don't
Remains of the Day – Ishiguo
A Fine Balance – Mistry
The Five People You Meet in Heaven – Albom
The Folk of the Faraway Tree – Blyton (I used to love Enid Blyton but missed this one)
The Wasp Factory -Banks
A Town Like Alice – Shute
The Ice Queen – Hoffman
The Archivist – Cooley 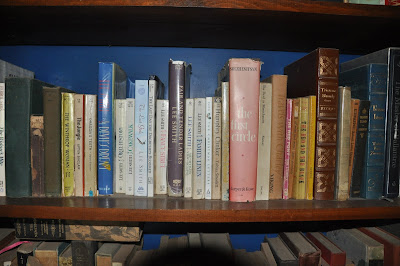 From Jo Walton’s AMONG OTHERS (mostly fantasy and sci fi.  I am familiar with many of the big names, Heinlein, Asimov, Silverberg, Adams, LeGuin. In the Fifties, I read lots of SF and even subscribed to the magazine Fantasy and SF -- I'm sure much of what I read has stuck with me but I kinda quit reading much sci-fi  after the Sixties. Now i find myself returning to some old favorites and enjoying a lot of authors that I missed. )

Adams - The Hitchhikers Guide to the Galaxy (One of my favorites)
Anderson -The Broken Sword, Ensign Flandry, Guardian of Time
Anthony- A Spell for Chameleon, Vicinity Cluster, Chaining the Lady
Asimov - The End of Eternity, Guide to Science, Foundation Trilogy, The Left Hand of the Electron
Austen - Emma (I love this book)
Blyton - Malory Towers (another Blyton to look for)
Boyd - The Last Starship from Earth
Bradley - The Spell Sword (I loved The Mists of Avalon but was not so impressed with subsequent entries in the series)
Brazil, Angela (author)
Brunner - Stand on Zanzibar
Carpenter - The Inklings (bio), Tolkien (bio) (I want to read these)
Churchill – History of the English- Speaking People (and this)
Clarke – Forgotten Enemy, Imperial Earth, Childhood’s End
Clement – Mission of Gravity
Coney – Hello, Summer, Goodbye; Charisma
Cooper - The Dark is Rising Sequence  (just finished rereading all of them)
Cussler - Shockwave
Delaney - Babel 17, Trouble on Triton, Empire Star, The Einstein Intersection
Phillip K. Dick
Donalson – The Chronicles of Thomas Covenant (intriguing)
Eliot -Four Quartets, The Wasteland
Ellison - Dangerous Visions
Engdahl - Heritage of the Stars, Beyond the Tomorrow Mountains
Fowles - The Magus (I LOVED this book -- have read it many times and may have to have another go
Garner -Red Shift
Graves – I, Claudius (I read this when I was in high school -- one of the few books on my parents' shelves. Time for another re-read.)
Harrison - Make Room! Make Room! (the original, I believe, of Soylent Green)
Heinlein -The Number of the Beast, Starship Troopers, The Moon is a Harsh Mistress, Citizen of the Galaxy (on my shelves. H is a sexist of the first water but he can sure tell a story.
Henderson - Pilgrimage ( I think I read this about half a century ago an seem to remember liking it)
Herbert - Dune (Loved this and have read it many times. I found the sequels disappointing.)
Hughes -Crow (poem)
Huxley - Brave New World  (of course)
Kerr - When Hitler Stole the Pink Rabbit  (really?)
Ursula K. LeGuin -The Farthest Shore, The Eye of the Heron, The Word for World is Forest, The Dispossessed, Wizard of Earthsea, The Lathe of Heaven, City of Illusions, The Winds (very much enjoyed Earthsea)
Lewis, C.S. (author) (from Narnia to his sci-fi trilogy, his novels and even his Christian apologetics, I've read and enjoyed all his works)
Marx - The Communist Manifesto
McCaffrey – Pern series, Dragonquest)
Miller - A Canticle for Leibowitz- (Another one I remember reading and liking a looong time ago)
Montgomery - Jane of Lantern Hill
Moore - Lot
Niven - World of Ptavvs, Ringworld, A Gift from Earth, The Flight of the Horse, The Mote in God’s Eye (with Pournelle)
O’Brian - Voyage to Alpha Centauri
Piper, H. Beam (author)
Plato - The Symposium, The Republic
Ransome, Arthur (author)
Renault – Return to Night (a Renaukt I'm not familiar with)
Robinson - Callahan’s Crosstime Saloon, Telempath
Shute - An Old Captivity
Silverberg - Dying Inside, Stepson of Terra, Up the Line, Born with the Dead, The World Inside
Simak -City
Smith, Cordwainer (Author) (Is that a cool name for an author or what?)
Smith, D.- I Capture the Castle, The Starlight Barking (these both sound most interesting)
Streatfield, Noel (author) (read many of these as a child)
Sturgeon - If All Men Were Brothers
Tey -Daughter of Time (I went on a Tey rampage maybe twenty years ago -- time to reread)
Tiptree - Warm Worlds and Otherwise
Tolkien - Lord of the Rings (of course)
Vonnegut – The Sirens of Titan
Wyndham The Chrysalids (another that I know I once owned and read but don't remember)
Zelazny -A Prince in Amber (and other in the Amber Chronicles), Creatures of Light and Darkness, The Guns of Avalon, The Dream Master, The Sign of the Unicorn, The Dream Master, Isle of the Dead, Roadmarks, Doorways in the Sand (I think Ethan had a lot of these books at one time and I gave a look but didn't get into them -- may give Z another try.) 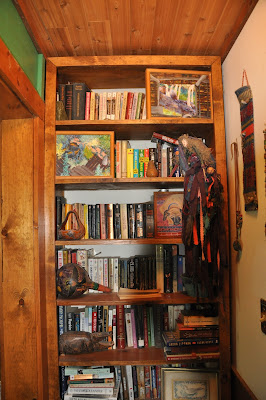 Email ThisBlogThis!Share to TwitterShare to FacebookShare to Pinterest
Labels: books

I'm currently reading the Golden Compass. His Dark Materials is one of my elder daughter's favorites. I've been intending to read The Dark is Rising, also on my bookshelf courtesy of my daughter. And The Magus, I should reread it. The Latin quote at the end used to irritate me because I couldn't quite translate it, but now Mr. Google does an admirable job. I Capture the Castle is one of my favorites.

My husband has read Cloud Atlas and tells me it's really not like the movie. He just finished One Hundred Years of Solitude. He reads much less fiction than I do, but of better quality. I have a fondness for British crime novels and space opera.

“A Fine Balance” is very long, and very worth reading.

That is an impressive list. I may give a passing thought when I see reference to another book but never as deeply as you have. It's hard to imagine that you have not read Gabriel Garcia Marquez. ONE HUNDRED YEARS OF SOLITUDE is a must-read.

I'm embarrassed that I haven't but there it is. Nor have I read Rushdie. I guess I'm waiting for the right moment.

I checked with great pleasure your list of "non fantasy" books and wrote down a couple of titles... the first one to read will probably be "The Archivist" that is already on my shelf.

I love War and Peace! Such characters! Such drama! A magnificent book!

I would like to add to the list some that might be a stretch on the category. WATERSHIP DOWN,SONG OF THE SOUTH and some of Philip Wylie's books Generation of Vipers and The Disappearance.

Sandy -- it's the Russian names that always confound me. I have trouble keeping people straight. I enjoyed Crime and Punishment and Anna Karenina as well as Tolstoy's short stories but the longer works tend to wear me out.

Jim -- I've been eying my copy of Watership Down, wondering if I'll love it as much as I did the first time. I was disappointed by Shardik.

When I posted this on my Facebook page, a fine discussion ensued with many more recommendations.

"A Fine Balance" isn't all that long (sorry disagree Carol), but it is maybe my all-time favorite book.