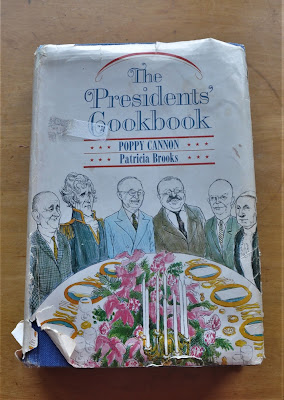 Some cookbooks make excellent reading. I'm thinking of Marjorie Kinnan Rawling's Cross Creek Cookery, Clementine in the Kitchen by Phineas Beck, and Edna Lewis's The Taste of Country Cooking, all on my kitchen shelf and all well-used. Now here's another.

The Presidents' Cookbook (published 1968) is a fascinating bit of social history, detailing the food served in the White House during the various administrations from George Washington to LBJ.

There are gossipy stories about the presidents and their ladies, staggering menus of multi-course meals, descriptions of decorations for grand functions, glimpses of the family life (oh, the rowdy T. Roosevelt children!) and the challenges of running a household like the White House where every move is subject to political criticism -- a wealth of detail that makes even the lesser known presidents come to vivid life.

(A touching story about McKinley: in order to protect his wife Ida who was subject to brief fits of epilepsy, he defied protocol and had her seated beside him at all dinners so that, at the signs of an approaching seizure, he could place a napkin over her face until the fit passed.) 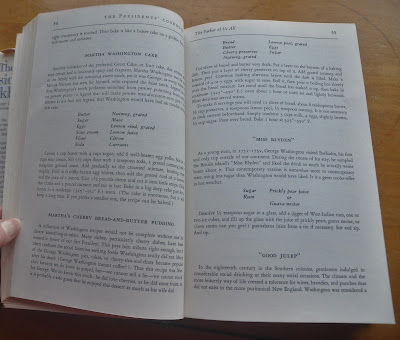 And there are wonderful recipes -- some more of historic interest, such as Martha Washington's Harty Choak  (artichoke) Pie that involves sugar, grape juice, cinnamon, ginger, and beef marrow. I'm not tempted.

But her dessert recipes sound delicious -- Trifle, Shrewsbury Cakes, Maids of Honor, and Bread and Butter Pudding. And I'd like to stir up some Sack Posset and Syllabub, just to satisfy my curiosity about those drinks. 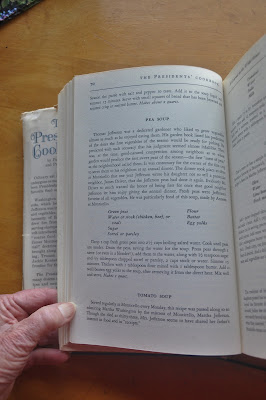 Of course the tastes of the age, the state of the Union, and the idiosyncrasies of the presidents influenced the food. Thomas Jefferson, who was fond of French cuisine and spent mightily on wine (from his own pocket) unlike Abe Lincoln who was "almost entirely indifferent to food except that he liked apples and hot coffee." (Despite Lincoln's simple tastes, Mrs. Lincoln organized a banquet that was hailed as "one of the
finest displays of gastronomic art ever seen in this country." 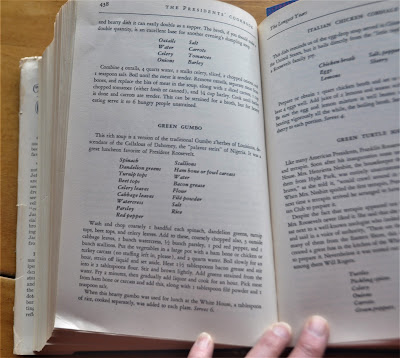 As a brief bit of social and political history, this book is well worth looking for. It's out of print now but available online from second-hand book stores and other sellers. 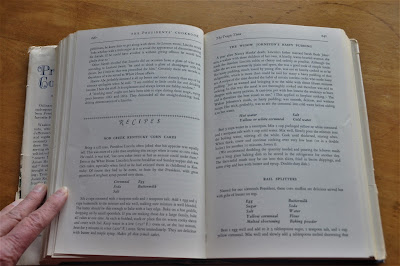 I only wish there were an updated version -- though given what is said about the eating habits of the current POTUS, perhaps it's just as well no one's attempted it. 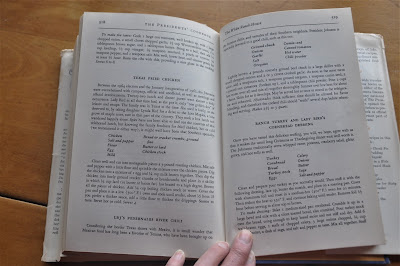 How delicious and delightful that must be. I might add that used bookstores seem to have more cookbooks than anything else!

A subject more serious that it seems , isn'n it ?