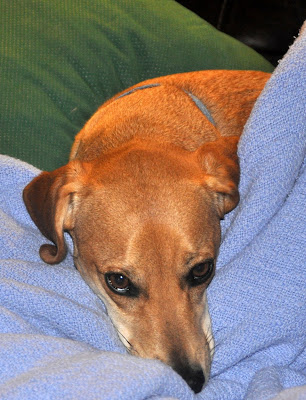 Yesterday I had to make that decision that is so difficult yet such a blessing. 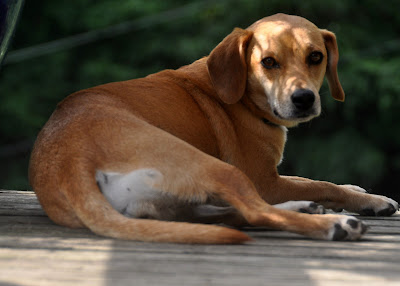 Willa had not been eating with  her usual appetite and there had been several occasions of urinary incontinence for which I'd taken her to her regular vet. He prescribed some pills; the incontinence stopped. She was still picky about her food but could be enthusiastic about chicken and rice which I fixed for her. And she still ran around with her usual energy.

Then on Saturday she refused all food and there was profuse vomiting on Sunday morning. So I took Willa to the emergency vet on the other side of Asheville.

After much blood work and several x-rays, Willa was diagnosed with severe/chronic kidney failure. The prognosis was bleak -- there were treatments but little/no hope that they would restore kidney function. 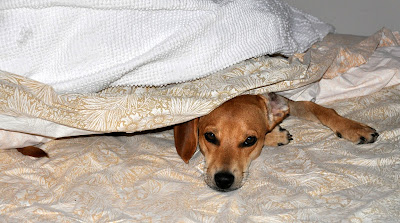 So I opted to let her leave this life, with bramble briars still in her fur from chasing rabbits Friday night. 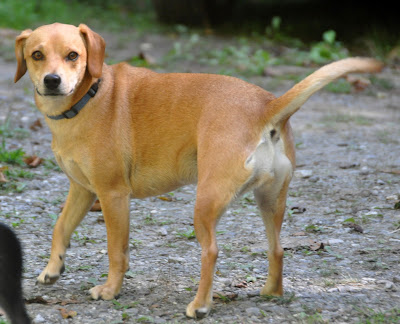 They brought her to me in a room with a sofa where I could spend a little time holding her and talking to her.

She was in my arms with her head on my shoulder when the vet put the lethal dose into the already in place IV. My hand was on her heart when it stopped.

It was a gentle passing and the vet assured me that it was the right choice . . . I said I wished I could have that sort of choice if I were faced with an incurable disease.

I held her a little longer before they took her away and put her into a box so I could bring her home. 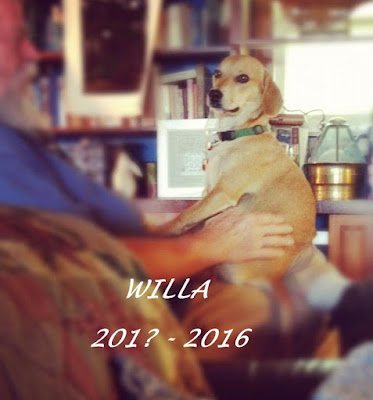 She's buried by a stone bench on the edge of the woods where she ran and barked and chased rabbits. 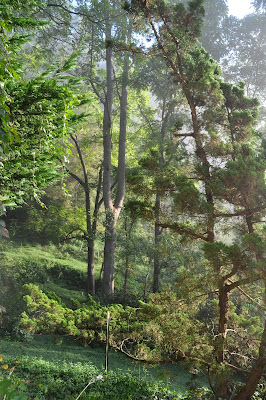 Email ThisBlogThis!Share to TwitterShare to FacebookShare to Pinterest
Labels: Willa

Oh, Vicki, I'm so sorry for the loss of Willa. You have my heartfelt sympathy.

Sweet Willa. I have tears in my eyes and am smiling at the same time. It is so hard to let them go but they take a piece of our heart with them. Sending love your way.

Thinking of you and hope the empty moments ahead will be filled with happy memories. I think it is a great act of mercy to be able to release living things from suffering but oh, the courage it takes. Rest in peace, Willa.

I am so very sorry. Even knowing you made the right choice for Willa, it hurts. I am glad her passing was so peaceful and you could be there with her.

I'm so sorry Vicki. Hugs to you.

Tears in my eyes, Vicki. Your blog let many people get attached to Willa and now we are all sad, but I know you are even sadder. So sorry.
Deana the Queena

I can't type for the tears Vicki. I'm soooo sorry. She was such a lovely little dog. I have really been wanting a dog lately. There is nothing like the friendship of a dog when it comes to love. They are always the same, so faithful. I have been on that journey to the vet several times and it never gets any easier does it!

Aww .... I know that doing the right thing is still a hard thing.

Hopefully, dying with dignity will soon come to pass. We now have a legal form of it here, but it is still too restrictive.

I am so sorry for your loss yet so glad we have access to humane care at the end for our precious animals. May your memories be joyful and your heart be glad in the good life Willa had with you all.

I am so sorry for your loss, Vicki. Willa was lucky to have such a sweet and compassionate momma. She gave you great joy and you gave her dignity. Much love and feelings of comfort to you.

Such sad news this morning. I am glad that you held her as she passed on. So sorry

I'm so sorry, Vicki. I can tell how much joy she brought to your life. Hugs.

Our sweet pets come into our lives and bring such joy. THey have characters that they teach us. Then we care for them and share their beings. And then they must leave us again. We who are left behind have such an empty place where they used to reside, but we fill it as best we can with our memories. I have loved all your posts about Willa over the short time she shared her life with you. Thank you for being Willa's person. May her spirit continue to bless you and your other animals.

Dear Vicki, thank you for allowing us the pleasure of knowing sweet Willa through your posts.

There is something very lovely about her being able to do some rabbit chasing a few days ago.

I send condolences and best wishes to you and yours. xo

Vicki, so sorry to hear this. She lived all her life with you in doggy heaven anyway (rabbits to chase!) and It's good to know her end was peaceful and loving. She'll leave a hole in your home. I send condolences from across the ocean.

So sorry about sweet little Willa. It's wonderful that you had the courage to give her your blessing rather than making her stay around and suffer. I do recall our visit to R.E.A.C.H when our dear Ellie died. They were so wonderful in such a difficult time.

Hugs to you from Themba and I and the kids. I know how special each creature at the farm is, and Willa had such a great little spirit!
Keeping all fingers crossed that we'll see you this coming Easter!

I'm so sorry. Willa was so very special. I'm glad she chased rabbits on Friday.

I am so sorry for all of it We too just let our little guy go about a week and a half ago. He died of old age and he went peaceable with us. We were able to be with him when his heart stopped. I still suffer but yet we gave them the best life that they could have. Yours was more of a surprise and it does make it so hard. Take care.

Sweet Willa. You did the right thing. Absolutely. But it's so so hard. It's always amazing to me how vivid the memories of our pets are, years and years after they're gone.

So sorry for your lost. It's always a tough decision to let a loved pet go. I was with my son when he let his Molly go...it was tough but I was glad I was there with them. Take care.

Oh Vicki I am sorry.

I am so sorry Vicki. Willa was my favorite among your crew and since we no longer have any pets, I became attached to her via the internet. My heart goes out to you. All of my children were four-legged and I know how hard it is to let they go.
Sending love,
Sam

So sorry for your loss. My husband and I had to make the same decision three years ago August. Our Cezar had been with us for fifteen years and was such a sweet, sweet family member. In his case, it was old age, and we monitored when the time was right to let him go. Our vet was wonderful. We buried Cezar's ashes in our backyard, too.

Please know I will miss her sweet face in your blogs. I had a beagle named Gussie and her kidneys failed. I was there with her when she got the injection. She stared at me until her eyes close. It took me weeks to get over it.

I'm so sorry, Vicki. It's heartbreaking to lose them, but I'm glad you were with her.

Walk with the angels Sweet Willa. You are missed by more than your family.
Big hugs to you Vicki. There are few things as heartbreaking as this decision. Hard and loving.
Kathye