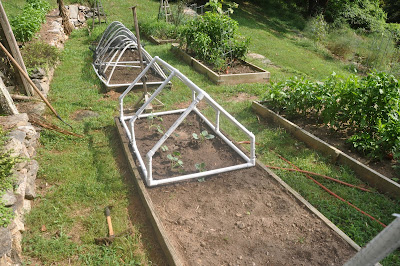 In the never-ending battle against bunnies and Bambi, John has constructed these handy-dandy garden cages. 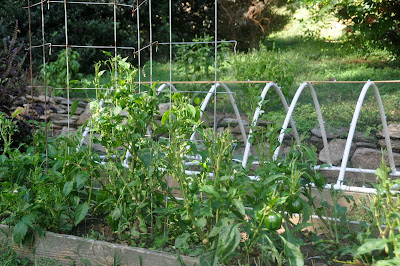 In the picture above, you can see how the deer have cropped off the tops of the peppers. 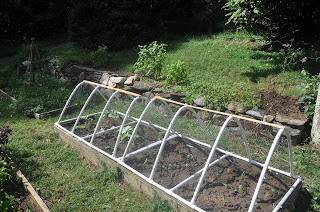 I wanted some fall collards, kale, and broccoli, as well as some lettuce so John used PVC, netting, and plastic ties to construct these lightweight, two part covers for two of the box beds. 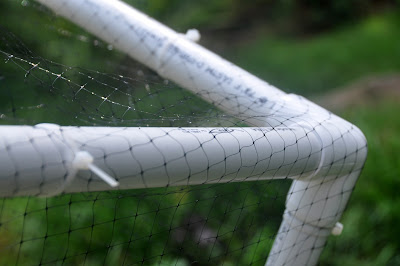 It's  an elegant solution (I hope) to the problem. The picture below shows some shade cloth added for the lettuce. 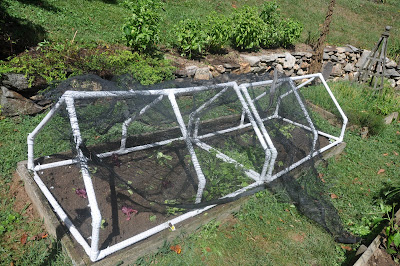 He says he can build taller ones for next year's peppers . . . 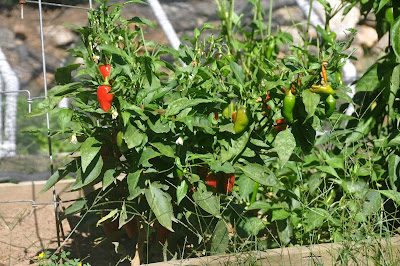 Luckily the deer don't seem to like the peppers themselves . . . maybe they tried one of the jalapenos. And, except for flea beetles earlier, no one messes with the eggplant. 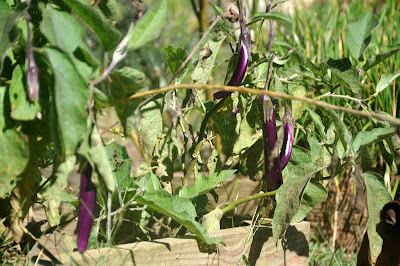 Fantastic! But what about the slugs? How do you keep them off?

Right now it's so dry that slugs aren't much of a problem. I have sprinkled ashes on the dirt to repel them. BTW, Stella, I've tried and tried to comment on your blog and can't do it.

The solution looks good too.

They say give a good man some duct tape and/or PVC and they can do anything. Great idea and actually pleasing to the eye.

These frames are very elegant indeed. Good enough to show off. Clever John.
As for the slugs, if you put a few slug pellets into the frames where the birds or pets can’t get at them, that should do the trick.

Vicki, I join Friko in complimenting your husband's wise strategies. Who knows what his wildlife opponents are plotting next.