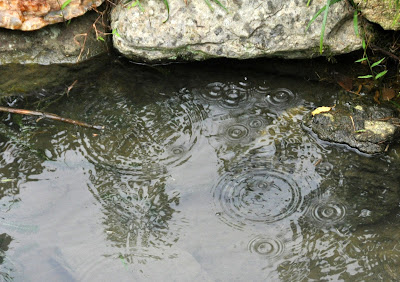 Blessed be the glorious rain that fell before the Monday night debate and put us all in a fine mood! 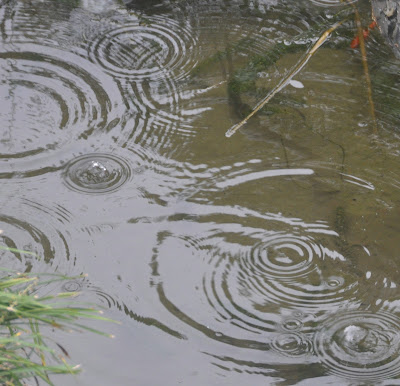 But as for that streamed discussion last night -- well, it wasn't what I was expecting. The nice person at Malaprop's who invited us was blindsided too. It turned out NOT to be an hour of four or five of us discussing the debate (with great wisdom and insight, no doubt,) but two minutes of input from two of our group which was added into a stream of two minuteses from other groups across the country.

In the group, which turned out to be twelve or maybe fifteen, there were no Trump supporters (this WAS in Asheville and in a flamingly liberal bookstore to boot so not really surprising) and only one Undecided - a lady who was leaning toward Gary Johnson even though she professed to be 'afraid' of DT and felt HRC had won the debate. 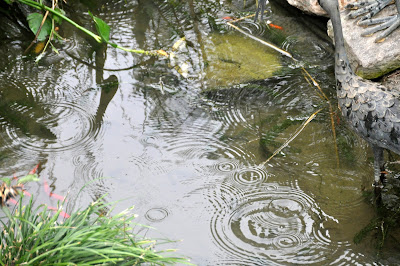 I'm afraid she was ganged up on by the rest of us -- in a fairly polite sort of way -- as we were waiting for our two minutes of fame. What was wrong with HRC? she was asked. The answer, according to Ms. Undecided, was that HRC was too old. Ms. U said that she herself was seventy and she couldn't respond to situations quickly, therefore HRC wouldn't be able to either. Also Benghazi, which was, said Ms. U, caused by HRC's improper use of an email server. And finally, and most damning, HRC is a woman and wouldn't command respect in the rest of the world.

At this point, several of us had to exercise great forbearance and luckily it was almost time for the camera to go live. At which point Ms. U was asked if the debate had made her less undecided. A most tenacious, if ill-informed woman, Ms. U said no. Then another woman was given a chance to say she thought HRC did a good job. And that was it.

Kind of an exercise in futility. But I did recognize in one of the participants a woman who had come from the Tampa Tribune, some forty years ago, to interview John and me and write an article about our flight from Tampa back to the land. She lives in Asheville now and remembered the visit and we are planning for her to come out to see how things have changed and how they haven't.

So that really made it all worthwhile. . . Ms. U., though, I'm still grinding my teeth and shaking my head. . . 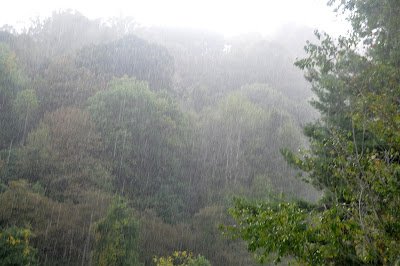 Lovely water photos--thanks.
I couldn't watch the debate--I'm getting ulcers the closer we get to elections, and the more I hear about seemingly intelligent people either liking (how can I use that word) Trump, or almost worse, voting for Jill Stein because they "mourn" Bernie's loss--the self-righteous baby-hippies. I did see clips of it--like the one in which DT said it was smart not to pay income tax.
Hear me roar!!!

Vicki, how interesting that the bookshop event was so different from what you'd expected, or even agreed to attend.
Even so, it sounds as if you got a window view of a certain cross section of opinions.
It's great that you re-connected with the Tampa Times writer.

The rain and fog photographs made perfect partners for the post! xo

I eagerly sat down to watch the stream. But I saw a bunch of people, none of whom were in Malaprop's. I kept waiting and after several minutes I decided that somehow I was getting a different stream so I tuned out. Sorry the "town hall" was not limited to your group.

I've become accustomed to the ignorance surrounding me. But I must admit, I do look askance at some otherwise reasonable people who are going to vote for DJT. I know it's not fair, but I'll never have quite the same respect for them.

I thought there was something wrong with the feed -- all I was seeing were Trumpets yelling about HRC so after manys attempts to find "you" I gave up! Sorry it wasn't what you expected but at least you met an old friend!

Oh dear, none of this is making me feel optimistic. Except the rain....

I see that HRC had a little bump from the debate -- at least in the betting lines.

"Also Benghazi, which was, said Ms. U, caused by HRC's improper use of an email server." That's priceless.