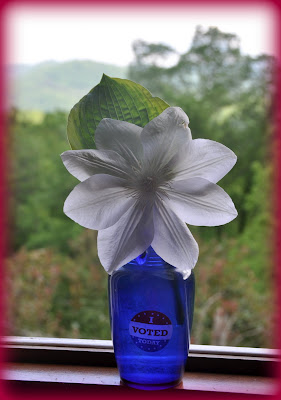 In spite of a wretched cold and thanks to the early voting option. . . 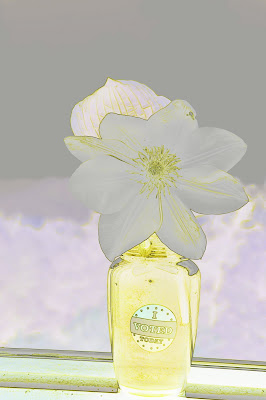 I just couldn't wait till Tuesday to cast my vote against North Carolina's mean-spirited Amendment One .  Many churches, businessmen, and even the state Board of Education have warned of adverse consequences, should this bit of bigotry pass.

As they used to say in my county, 'Vote early; vote often!'

I did the first; if only I could do the second.

UPDATE: The link I had put in above didn't work so I've removed it. To answer Barbara's question -- and for those of you not in North Carolina -- Amendment One seeks to add an amendment to the NC state constitution to this effect:


"Marriage between one man and one woman is the only domestic legal union that shall be valid or recognized in this State. This section does not prohibit a private party from entering into contracts with another private party; nor does this section prohibit courts from adjudicating the rights of private parties pursuant to such contracts."

Not only does this appear to prevent same sex marriage (which is already banned in state law,) it also appears to invalidate ALL domestic partnerships, whether same-sex or not.  There is concern that, for example, the children of a common law marriage  would not be legally entitled to benefits or that an abused partner in a non-married relationship would not be entitled to the same protection against domestic violence that a married partner would.

If I weren't still coughing and blowing my nose every few minutes, I could give you a real rant. Instead, here's a link to a very good essay about the amendment by a lawyer -- who is also a lesbian in a long term committed relationship. 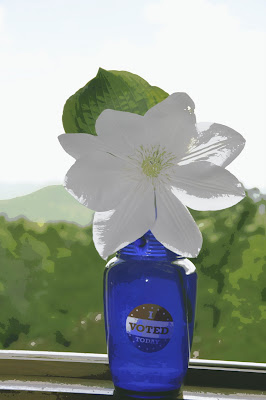 Despite my world-weariness when it comes to politicians, I always use my vote, if only to honour those who fought for me to have it. Glad you managed to get your vote in.

We voted on Thursday. Even though I don't enjoy the fray of politics, I am going to help a friend next Tuesday at the AGAINST table. This amendment is so un-American. Hope you shake that cold soon-its awful when you are sick when it is so hot.

good on you...we must use what little voice we still have if we want to keep it...

Good for you. Hate in the name of religion is still hate. In Lenoir City, Tennessee, this year people are lobbying to prevent a kid from graduating from high school because he is openly gay.

Being at home, nursing my new hip, I requested an absentee ballot. I've voted against the amendment. Interesting how they "hid" it in a primary where most Democrats would have little reason to get out to vote. I do hope it gets defeated.

Yikes -- this amendment sounds treacherous from the tone of the comments -- but I really don't know what it is all about? Could someone explain -- barbara

We voted early as well. While I love actually going to the polls on Election Day, I didn't want to take a chance something might keep me from voting against the ammendment.

It's a hateful, hateful amendment. I wish I could vote against it.

I do hope you feel better. I'm going to email you what my family calls Cold-Killer Soup.

The boundaries of what a marriage actually is seemed to be very much dimmed these days. Surely, the important thing is to make a good Will?

Star, a will can't help if, for example, one of the partners is in intensive care where only family are admitted -- the well partner isn't considered family. Nor would said partner be allowed to confer with doctors and make decisions in the way a married spouse would. hat's just one small example and the cold in my head (still raging, alas) prevents me from exploring the topic fully.

Wayfarin' -- some so-called Christians sure don't act in accordance with the Golden Rule -- or even common decency.

Glad you voted. Good for you.

I don't usually vote in primaries, so I did the absentee ballot thing because I was afraid I'd actually forget to vote. And now I'm sick as well and don't feel like doing much of anything, so I'm glad I did that.

I have many relatives and friends who are gay/bi-sexual. Why would I want someone I care so much about to be treated as a second-class citizen? Add in all the other problems with this amendment, and I just can't see how we could let something pass. It's not something that should even be on the ballot in the first place.

(OK, my rant for the day. Back to the sick bed now. Hope we both get to feeling better.)

It's cheap and cruel. Seems like in every subject that matters--treatment of women, the environment (Koch brothers), civil rights...you name it.....we who value human rights and social justice...are under siege. It's all about "control." We're having to go back and re-fight the battles we fought (and won)decades ago. Elora