Some Days Are Just About Perfect 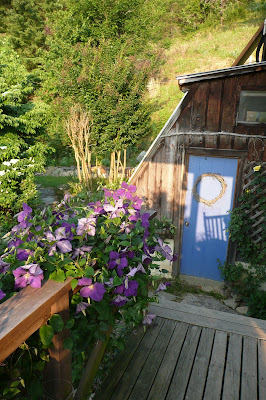 Yesterday I made a real effort to get out of the house and into the garden before things began to heat up too much. I was rewarded with the sort of slanting morning light that makes everything look good -- the purple clematis, the blue door . . . 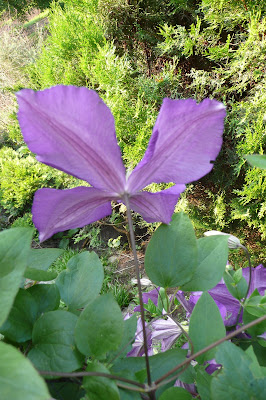 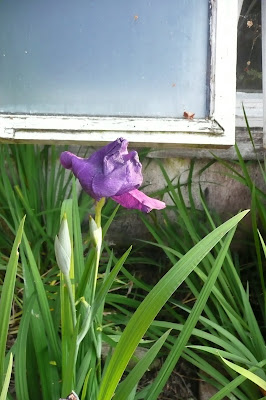 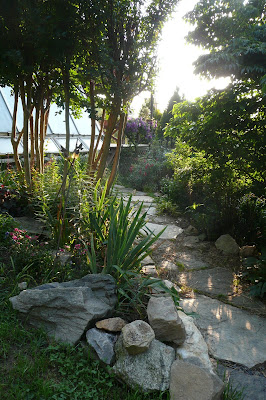 . . . the first bloom on one of my three-for-ten dollars bargain roses -- and what a gaudy beauty! 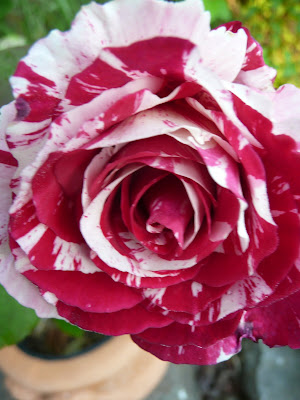 But I had a date with the garden -- John had tilled the beds and I needed to get the squash and pumpkin seeds in.

There was one problem -- our wild turkeys have been using that fresh-tilled soil for dust baths -- so I got tobacco sticks from the barn and made little turkey deterring (I hope) tripods and planted the seeds under them. 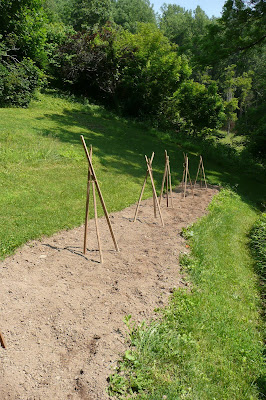 I have great hopes that these heirloom pumpkins will prosper . . . and I also planted crookneck squash and zucchini . . . still have to find room for some hubbard and butternut squash . . . perhaps in with the corn . . . 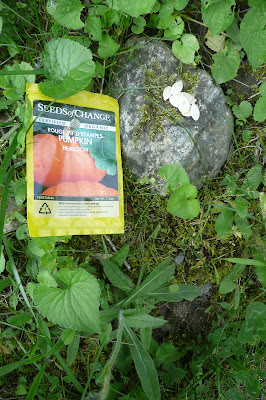 The soil was dry as ash and as we ate lunch, we were thrilled to hear the sound of distant thunder.

And just then, there was a phone call. It was Carol -- Writers Porch Carol -- calling from Mississippi to say she'd sent me a package and had just gotten word that it had been left in the pig pen!

(This isn't as weird as it sounds. It's our neighbor's pigpen, near our mailbox and pigless for many a year. It's where the mail carrier as well as the UPS driver generally leave parcels that won't fit in the mailbox.)

Carol wouldn't tell me what she had sent -- just urged me to hurry down and get it.

So, like a child on Christmas morning, I hurried down. The mailbox is half a mile down the road and I took the jeep. Marigold watched me go by, wondering why I hadn't brought her a treat. 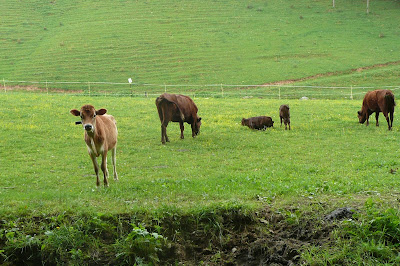 It was beginning to splat big raindrops and I dodged through them to retrieve the package from the pigpen. 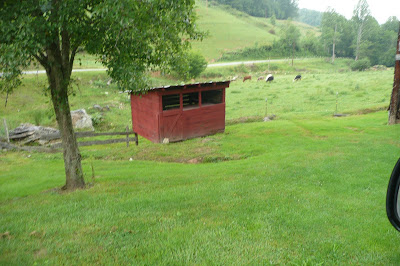 Halfway back up the road, the skies opened up in a veritable gully-washer -- including, briefly, marble-sized hail. I was pleased to see that all my plantings were receiving a good soaking. Virtue rewarded! 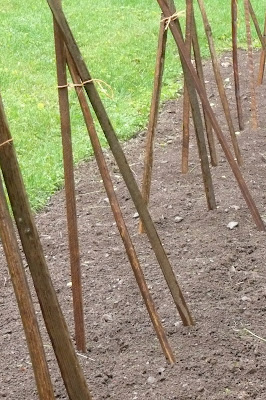 And when I got to the house and opened the package! Oh rapture! Oh bounty! Oh Carol!

Vegetables from Carol's garden -- kept in perfect condition by all the little freezie things she had packed them with. Green tomatoes, yellow squash, green peppers, banana peppers, hot, peppers, zucchini, and cucumbers -- the sweetest cucumbers ever. We had them last night, sliced with green onions, fresh dill, and a light vinaigrette.

I'm planning a feast with the rest -- fried green tomatoes, grilled squash and peppers -- I'll throw some of our asparagus on the grill too and I'll make shrimp and grits -- maybe a little andouille sausage too. The rock guys are planning to finish up the path on Friday and this ought to be just right.

And to cap off a perfect day, it rained again after dark -- over two inches!
Just look at those gorgeous vegetables! Thank you, Carol!!! 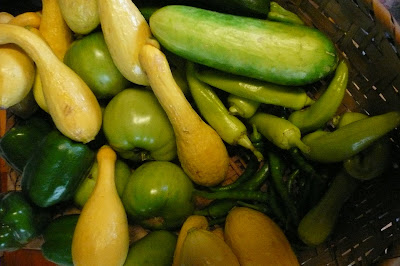 That does sound like a perfect day! Those vegetables are beautiful and I'm so anxious for mine to come on, although it will be quite a while.

Only like 12 big drops of rain here, but thunder all around us and black, black skies. Oooooh but we need a few days of a good soaking rain!

Vicki....sounds like a great feast for sure!I'll probably be getting close to Stillwater when your feasting! Yee Gads...I just got in from gathering! I will post a picture in a few. I sent yesterdays by Hubby over to my Dad's. Got to deal with this before I leave !! :) xoxo

I wish I could send you some of our rain, Pat! We've had quite a lot this spring.

Vicki, that does sound like a lovely day. All we've got from the garden so far is lettuce, arugula and spinach although everything else is coming along. And shrimp and grits with andouille sausage! Yum, yum!

We had just a drizzle a while back. Maybe we'll get more tonight. A box of veggies must be about the best surprise you can have. When I friend of mine--prof at Yale--was one of several severely injured by a crazy man with a knife in a restaurant up there---I mailed him some of our garlic and potatoes. He was amazed!

I really must be losing it as I could have sworn I left a comment here this morning!
Sounds like an incredible feast you have planned Vicki! I hope my son will be feeding me something good too tomorrow night! I'm just gonna eat that baby girl Amy up, I am!Have a great weekend!
xoxo

Hey, Pat -- it's raining again tonight -- hope it rained for you all.

Karen -- I'll be talking with you all tomorrow!

Kay - yes indeed, there is something lovely and comforting in homegrown vegetables by mail!

Happy trails, Carol! We'll lift a glass to you when we have our feast tomorrow night!

Victoria in California and and Vicki in Provence -- I love how this blog has expanded my world!!