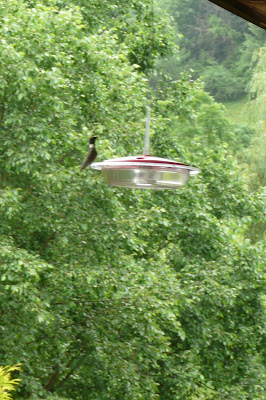 One lone male hummingbird -- master of all he surveys.


But before he can settle down to enjoy himself -- here comes another hummer and the first guy feels obligated to defend the nectar -- no matter that there are four feeding holes and a lady in the kitchen ready to refill the feeder -- it's a point of honor! 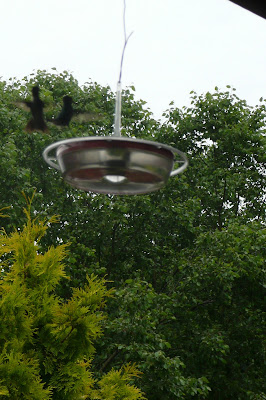 These tiny birds buzz and twitter and perform spectacular aerial maneuvers -- only now and then managing to get a sip of sugar water. 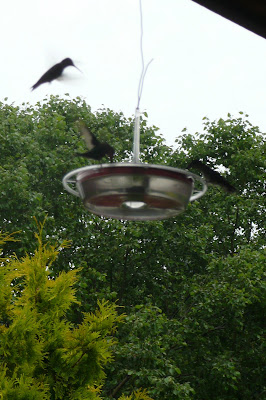 I took these pictures a few days ago and was reminded of them last night when a heated discussion broke out after dinner about Twitter -- yes, the social networking kind. I don't know much about Twitter -- don't tweet and don't follow anyone else's twittering. So I didn't feel capable of weighing in on the subject under discussion -- which, if I followed it, was something like "Email and Twitter and other social networking modes, all of which place a premium on brevity, are rapidly destroying their users' ability to engage in detailed and abstract reasoning." 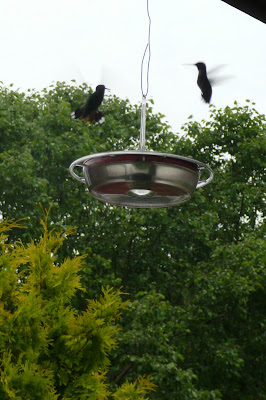 Or not. Twitter's role in getting the news out of Iran and in enabling dissidents to come together was referenced. Haiku were mentioned too -- an art form in which brevity is like the distillation of ideas. A case was made that many people are communicating now who otherwise would not.

I don't know how the discussion ended. It got too loud for me and I went upstairs to check my email.

What do you think? Is all this communication a good thing? Any down sides? (Of course, the fact that you're here reading this suggests a certain bias in favor of the Internet.) 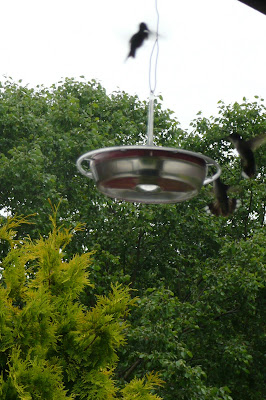 Well, you know I tweet, so you probably expected this response. Whoever brought up haiku was right on the mark. The character limit is a grammatical and linguistic challenge, met with growing forms of creativity by users. The way Twitter is being used is changing, from diary-like comments on daily activities (which I'm not decrying; they can be creatively entertaining) to what we're seeing this week in Iran: news dissemination, political activism and subterfuge, virtual rallies, etc. In one week, a generation of minds in Iran and the U.S. have been changed about each other, by having these conversations online. But I was hooked before now; I love reading and participating in this mass conversation. It's crazy.

The problem with Twitter is that most people don't really get how great it can be unless they go ahead and try it. It just sounds silly. Which is fun too.

I'm a huge fan of the fact that on the Internet I have contacts all over the world -- my blog and the exchange of ideas in the comments are daily widening my horizons. Haven't looked into Twitter for myself, feeling like it would be more time spent than I can afford. I know I'd be hooked immediately!

No Twitter for me! I love blogging and I am finding that there is enough going on around here that I'm finding it hard just to blog.
I think you can get too many irons in the fire and nothing of any qualitiy results!I'll just watch the Hummers twitter and stay happy!

I love the internets and the blogs. It's been amazing getting to know people across the country. It's been extremely helpful and encouraging to be able to follow along with other shepherds --especially since we all experience the same things from time to time. I love the community feel of it. Getting to know you, and see the 'behind the scenes' of sucessfully producing a book has been fascinating. Also the 'instant graitification' of the communication and response is great. As for Twitter, at this point I don't feel inclined. They are okay to follow, but mostly I come away thinking, huh? However the twitters I do follow are just on peoples blogs. The technology is wonderful, it's just sometimes it can consume so much time. I also wonder how it is going to affect future 'real life' communication skills. Great conversation starter! ha..
Tammy

The too many irons in the fire is what I have to watch out for, Carol.

And Tammy, the effect of all this on real life dialogue is what the discussion at my house was all about.

People texting or telephoning at the dinner table -- ANATHEMA!! Unless, of course, you're alone.

The internet has been great for me to find friends through blogs, and at that I have had to limit myself or it just becomes too time consuming. My daughter (in-law) had me join Facebook, but somehow I just can't get into it, and again, toooo time consuming. I'm imagine the same thing with Twitter. As for using ones cell phone to call or text, well, definitely a time or place for that with others consideration in mind.

Unfortunately, we have an entire generation of young people who don't know the joys of letter writing! Society as a whole enjoys the instant gratification of text and email - we are not a patient people. I gave my daughter stamps and notecards when she left for college and told her to please write to my mother (who does not email). My Mom was thrilled to get notes from her and my daughter could see how much it meant to her grandmother. A text message cannot make up for a note written in the hand of someone you love. That said, I communicate with my daughter daily via text and I love that we can stay close when she is far away. Good discussion on this topic from your readers, Vicki, thanks.

Hey, Pat -- Yeah, I don't get Facebook either. That be my friend thing -- from people I've never heard of -- is a little unsettling in a high-schoolish kind of a way. I joined and pretty much right away went inactive. Shelfari and Goodreads are two more that just began to eat up the time so I'm pretty much ignoring them.

Oh, you are so right about the letters, Liz, though I've had some emails that were so good I printed them out to save. But the handwriting and the stationery definitely add a lovely dimension.

I do write thank yous and condolence letters and maintain a rather sparse correspondence with a few computerless friends. But I'm afraid that I've been spoiled by the immediacy and convenience of email.

Both of my boys write thank you notes, I'm proud to say. One refuses to use email -- and only just barely uses the phone. But his friends know where to find him.