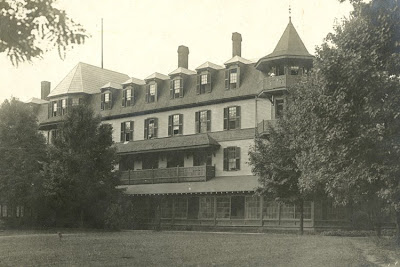 One of my aunts lives in Hot Springs (and of course, that's where my grandma went to school, at Dorland Bell). I've always loved visiting there. It seemed like some little town lost. I'm pretty bemused by its current reclamation by the hiking community. Enjoy your trip!

Three years ago, when we started looking for property in Madison County we stayed at the Mountain Magnolia Inn. I'll never forget the first night when we heard the train whistling through Hot Springs - it sounded like it was coming right through the bedroom and really jolted us - after that first night, though - we didn't even notice it at night! So much history for you to plumb in that town - I'm looking forward to it, Vicki.

Vicki...you already know how much I love Hot Srings! When I went there, it was freezing cold and I didn't get to nose around as much as I wanted too. The baths being in Gazebos next to the river knocked that out too! Right now, I love to jump in a cold bath! HA!
I do plan to visit again when I get the chance and can't wait to read your book and your take on it
since I know you are expert at capturing place! STAY COOL!

estaminet -- Hot Springs has certainly changed a lot since we first moved here in '75. I still have a hard time getting my head around what a HUGE destination it was in the 1800s --

Liz -- I'm looking forward to visiting the Mountain Magnolia for a meal and writing it off as research :-)

Speaking of jumping in a cold bath, Carol, I just bathed two dogs and pretty much got wet all over myself -- now I'm in front of a fan in my damp clothes -- ahhh, what bliss!

So old fashioned - I bet it is just delightful, xv.

Alas, Vicki -- The Mountain Park Hotel was destroyed by fire in 1920.

It served as an internment camp for German merchant marines during WWI and never regained its former glory.

Hi Vicki! Beautiful story! Thanks for sharing. I'd like to know where the Cherokees went? Are they still around?

Oh, Wil! It's a long shameful story and I'll do a post on it day after tomorrow. But the brief answer is yes, thank goodness.

Ah, I'd love to be there. It looks so much like Mohonk Mountain House in New Paltz, New York. One of my favorite places on earth.

It would have to be time travel, Marta -- the grand old place burned in 1920.

I wonder if people still go to resorts and stay for months, as they did back in the day of The Mountain Park?