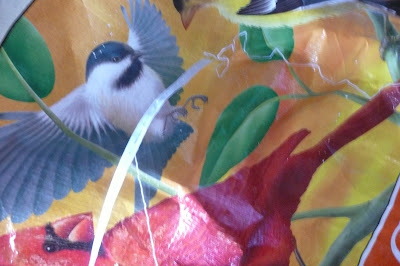 Yesterday, when I was fetching an empty sunflower seed bag to use to hold paper for recycling, I found myself absently pulling the string from the strip that had held the bag closed and shoving it into my pocket.

This simple act reminded me of my mentor in matters of mountain economy -- Louise Freeman. Louise was the one who showed me that the sturdy cotton string used to sew shut bags of feed was worth saving. It wouldn't have occurred to Louise not to save it, having lived her life in a culture that couldn't afford wastefulness of any kind.

So I have a little ball of string in my kitchen drawer -- just right for trussing up a chicken to roast or making a toy for a cat to chase.

The saving here is minuscule -- but it always makes me smile when I wind on another piece of string. 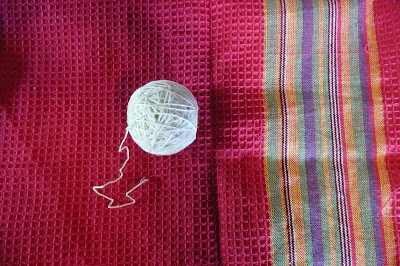 Of course, back in the Twenties and well into the Fifties, feed and flour sacks were often made of cloth, not paper or plastic. This cloth, originally a plain unbleached muslin, often with the brand name stenciled on it, was prized for dish towels, undergarments, and the like. Then some marketing genius had the idea to print patterns on the bags. And suddenly, poor countrywomen had 'free' pretty material to make dresses and curtains and the like.

And with the scraps, they made quilts! Quilts of such wild exuberance that they knock your socks off!

This one below is a Nine-Patch. Blocks composed of nine squares -- four of one print and five of another -- are joined with sashing strips of still more different prints. And all of these fabrics, I'm pretty sure, were from feed/flour sacks.

All I know about this quilt (which I bought some years ago in downtown Marshall) is that it was made by a lady named Esta Gentry and she lived in Jupiter -- which is just across the county line. 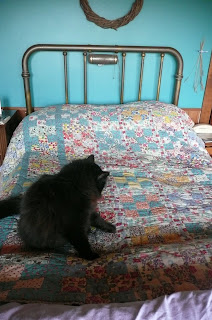 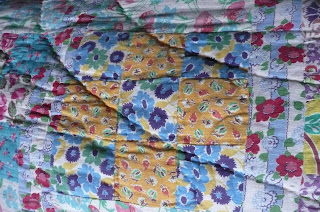 As time went on, there was another source of 'free' fabric. Almost everyone had a friend or a relative working in the mills or garment manufacturing industry in the area. I remember Louise giving me stacks of scraps -- literally, stacks, layered with paper in between the fabric -- odd shapes left when a collar or a sleeve was carved from a larger stack of material.

The tied 'quilt' below was made from a combination of flour sack fabric and mill ends. "These were the last squares Mama made," said my friend Grace, handing me a box of strip pieced squares. "Maybe you can do something with them."

The squares were made by sewing strips diagonally across a square of paper (cut from Sears catalogue pages, for the most part -- again, no waste.) I joined the squares in fours to make a diamond pattern then joined these larger squares with blue sashing strips.

I didn't quilt it (honestly, I think I'd have gone blind had I tried to -- it is rather loud), instead I tied it with red crochet thread, put a binding on it and gave it back to Grace.

And then, several years later, she gave it back to me. 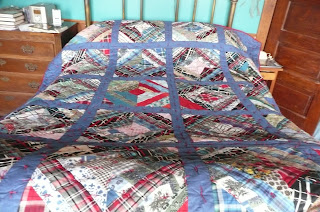 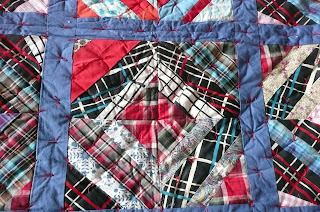 Vicki...what memories you can stir up! Both of my Grandmothers made aprons from flour sack cloth. I can see them wearing them clearly!
I also remember the dish towels too.
Your idea for putting together the quilt with red string was great, it looks beautiful!
Carol

Beautiful! Here, we had a woolen mill nearby and my grandmother and mother made woolen patched coverlets (tied quilts) for the cold, cold Maine winters (especially in Grammie's house, no central heating, just a hot brick or sadiron or, later, a bleach bottle filled with hot water to warm the bed.)

I loved taking this journey back to a lovely, simpler day. I remember those old dish towels from my grandma, too. Nice post.

Vicki, do you have how-to advice, or good resources to recommend, for tying quilts with crochet thread? I've been meaning to learn to do that. Thanks!

Carol -- I have some of my grandmother's flour sack aprons -- and the gypsy dress she made for me when I was five had flour sack material in it.

Auntie K -- I've seen beds around here with 10 or 12 quilts piled one on top of another for warmth. But I never know about the bleach bottle warmers -- would that have been the old brown glass Clorox bottles?

Thank you, Willow, for stopping by.

But briefly, you need your three layers -top, batting, and back -- basted or safety pinned together and stretched on a quilting frame (or over a big table or on the floor if your knees can handle working there).

Then you just thread your big needle, push down through all three layers, come up, repeat, and tie a knot.

There are several choices of knot and various opinions on how far apart the knots need to be -- check those quilting websites.

Thanks, Vicki. That does sound atrociously easy, with no secret quilting voodoo involved. Looking forward to trying it!