My sense of smell disappeared completely during the late unpleasantness of a fierce head cold (note 'late' -- it's clearing up nicely and this really will be the last post on the subject.) And along with smell went taste -- completely.

It's a strange feeling to bite into a slice of raw onion and taste exactly nothing. Or to nibble a garlic clove with the same null result.

After a little on line research, I learned that anywhere from 70% to 90% of perceived taste is dependent on smell. The taste buds on our tongues can let us know if a food is bitter, salty, sweet. or sour -- but that's it.

I kept trying food after food: tortilla chips -- crunchy and salty; salad greens with vinaigrette -- sour; coffee -- so godawful bitter that I immediately switched to tea with honey -- sweet. 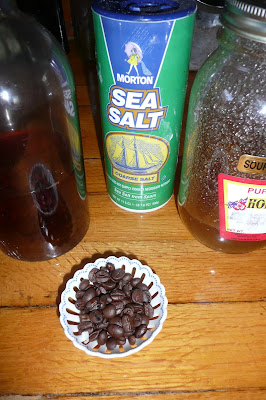 It seems that with a stopped-up nose, the odor molecules drifting from the food can't reach the olfactory receptor cells farther back in the nasal passage and consequently everything tastes the same -- which is to say, like nothing.

Everything smells the same too. "Clean!" I thought, sniffing a throw pillow that I knew well should smell of dog.

Thursday morning, as I made a cup of chai -- the scent of which is usually Very aggressive -- I sniffed at the mix and thought I caught the merest whisper of cinnamon. Later in the garden, I picked a sprig of thyme and, oh joy, could smell it -- though just barely.

It was like going from total blindness to being able to make out shapes.

As I made dinner, I experimented. Raw red peppers -- deliciously cool and crunchy and I believe I could taste them. Or maybe they were just sweet. Asparagus -- a little bitter. Onion and garlic -- I smelled them but they were pale imitations of the real thing. Very pale. Ditto pesto, shrimp, and shitakes. 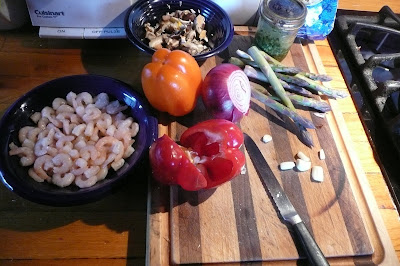 When I sauteed the lot together, the rising steam didn't bring to my olfactory receptors the information I needed to season the dish properly so I had to get John to give it a taste.

He pronounced it good, suggested the addition of grated Asiago -- which I could detect -- and we sat down to dinner. He said it was very good -- I enjoyed the textures and colors immensely. 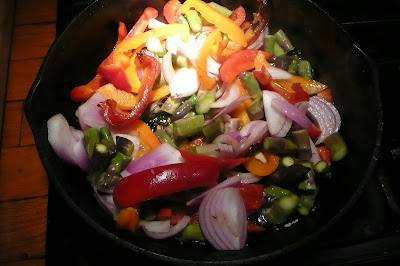 When I was very young, I read a book called Smeller Martin (by Robert Lawson, who also wrote Ben and Me). Smeller was a boy whose sense of smell was similar to that of a bloodhound and he used this super power to solve a mystery, as I recall.

I always thought that an enhanced sense of smell would be a wonderful gift, just as I always envy my hound Maggie when she lifts her nose to the air and takes in far more information than I'll ever have.

Right now though, I'll settle for getting my lost senses back.

Here's another little web album with pictures from yesterday -- and nothing at all about my cold.

Email ThisBlogThis!Share to TwitterShare to FacebookShare to Pinterest
Labels: smell, still going on about that cold, taste

I have no sense of smell today either Vicki. I'm in, what I hope, is the worst "cold" day. Glad you're feeling better. It encourages me...
Blessings, Star

This, too, shall pass! All best wishes for a speedy recovery!
~Vicki