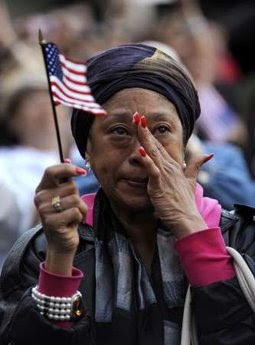 A meme was going around recently asking what makes you cry and I replied, not much. But yesterday's inauguration provided image after image image that made the tears well up -- 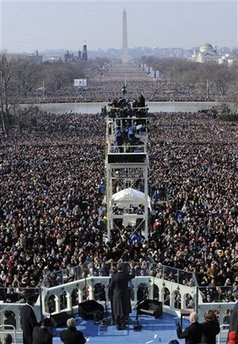 -- from the massive jubilant throngs of people
celebrating in the icy weather . . . 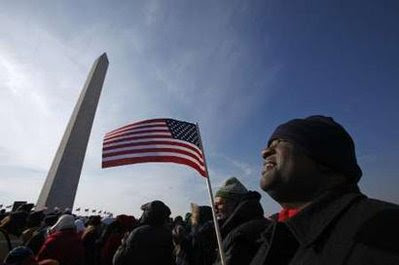 to Aretha Franklin belting out 'My Country 'tis of Thee' . . . to a stellar quartet that included Yo Yo Ma and Itzack Perlman performing the old Shaker tune 'Simple Gifts' . . . to the Rev.Joseph Lowery's stirring benediction . . . to shots of people celebrating, not just around the country but around the world . . . 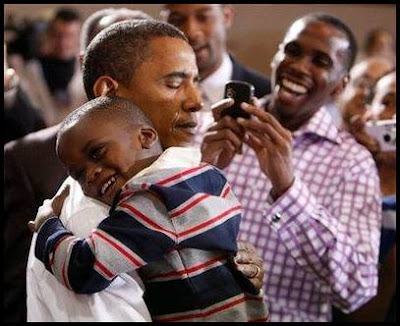 to this picture a friend sent me, that seems to sum up the hope and the promise of this new beginning . . . I spent the middle of the day with tears of happiness in my eyes.

Some folks said they just weren't much into watching all the carrying-on -- even though they'd voted for Obama. Just swear him in and let him get to work, they said. And that's the way I've always felt -- before this. I've never been remotely excited by an inauguration -- even Kennedy's when so many of my peers in college were wild with joy.

But this -- this election is this is the first time EVER I've gone so far as to send money and put a bumper sticker on my car.

It began merely as a fervent desire for change in the White House -- but the more I paid attention to this guy, the more I liked him. None of this Messiah stuff, just a pleasure in listening to someone who was intelligent and seemed rational.

It was only after his election that the magnificent historical implications of his heritage really began to sink in. You see, I remember the separate water fountains, the bitter racism of George Wallace,Orval Faubus, and their ilk, as well as the more polite racism of almost everyone I'd ever known.

I remember the separate plate and silverware my grandmother kept for the use of the black woman who cleaned her house and cooked many of the meals.

So, yeah, I was touched and amazed and joyful yesterday, seeing it all play out against such a backdrop of joyful folks of all shades. I kept thinking things like . . . Wow! . . Mine eyes have seen the glory . . . Nunc dimittis . . . that I have lived to see this day.

It's not the man, though I like him and hope he'll prevail. What had me on the verge of tears at so many times yesterday was the magnificent spectacle of our land beginning to live up to itself.

It's a great start. And yes, I had tears as well. And my mind went to two of my brothers whom I know are probably ready to spit nails. My mother didn't marry a man she was very in love with, and who loved her like crazy, because she knew they would not be able to accept the fact the he was black. She gave up great happiness the last years of her life because of them. I feel sorry for them, and now I feel like thumbing my nose at them. I am so glad this day came in my lifetime.

Vicki, a beautiful post. I was moved, too, but disappointed, as a poet, by the poem, esp. the delivery. What a great day for poetry it might have been. But it was a great day for this country, anyway.

Susan, my mother-in-law was enraged when a white television actress she had always admired married a black man. "Cardinals don't marry blue jays!" was her irrefutable argument against interracial marriage.

She's probably spinning somewhere right now to see the product of such a union as president. Or maybe, in the hereafter, if there is such, one learns some stuff.

Kay, I too was disappointed by the the poem and its delivery. The one you have up one your laureate lasso site is so much better.

I wanted to come to your do last night at UNCA but am in the final, FINAL, I say, throes of Miss Birdie. Not to mention that our road is a sheet of ice.

You got it exactly right, Vicki - hopeful realism and the joy in knowing that we have an intelligent, thoughtful person at the helm.
I, too, was disappointed in the poem - I was so moved by Maya Angelou's poem for Clinton "A Rock, a river, a tree.." it stayed with me all these years. Which is, after all, what a great poem can do for you.

It seems around the blogging world today I have seen the same question asked:
Where was Maya ? It no doubt would have made it perfect, just perfect !

Vicki....your comment about your Mother brought back a memory. I had a friend in Nashville who stopped watching Cagney and Lacy when she found out Tyne Daley was married to black actor Jim Brown.
I do love Tyne.......

And it was Tyne Daly that had my mother-in-law was so upset.

Also -- I've done another post just now with a link to Maya Angelou.

I always loved Tyne Daly and remembered learning she was married to a black man when I first saw her daughter on "Judging Amy." They were married in 1966 and I thought what a strong couple they must have been to go through what they must have gone through back then. (Divorced now mind you, but that's another story.) :-{

And yes, my hopes for the poem were not met at all. I imagine she was nervous (Who wouldn't be?) but it just didn't resonate as I bet we'd all hoped it would.

What a great start to this presidency. Didn't expect to be moved and found myself in tears several times. The snow here at the NC coast was a gift--we stayed in all day, watched the inauguration, and ate pea soup. Frankly I liked Lowery's prayer at the end. I stood up and said "Amen!" with the rest of the world.
Pepper

Oh me too re Lowery's prayer! -- a great old guy -- a piece of history himself. Loved the way he turned around the old 'Black, jump back' verse that was used by light-skinned African Americans against their darker brethren.