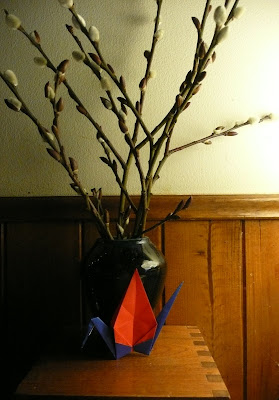 Ingrid included this origami paper crane with her New Year's greeting and I was instantly transported back to Christmas of 1965 -- in Japan.

John, in his last year as a Marine, had been assigned to the Marine Air Station at Iwakuni -- and since he was an enlisted man, I was not allowed to accompany him. Even on my own dime -- I looked into traveling over there and getting a job teaching English but was warned that if the Marine Corps knew of this, John would be transferred -- probably to Viet Nam which was just beginning to heat up.

But I could visit. So I made use of the Christmas vacation ( I was living in Tampa and teaching at Berkeley Prep ) to spend ten days in Japan with John. And one of the many places we visited during that ten days was the Peace Park at Hiroshima.

It was with a sense of duty, rather than desire, that we went there. We had visited beautiful shrines, imposing castles, fascinating historical museums -- traveling to a city to view the horrific reminders of damage inflicted by our country was not at the top of the list of pleasurable experiences. Of course, I knew the argument -- the bomb ended the war -- which the Japanese had started. But still . . . but still . . .

But still we went. I'll spare you the description of some of the more gruesome exhibits-- photos and artifacts -- except to say that in a crowd of Japanese, an American couple really stands out.

The beautiful part of the experience is where the paper cranes come in. Outside in the park was an arched structure and in the interior were string after string of tiny folded paper cranes, great waterfalls of color against the gray stone. This was the Children's Peace Monument, inspired by one young victim of the bomb.

Sadako Sasaki had been a two year old in Hiroshima when the bomb was dropped. Ten years later, when she developed radiation-induced leukemia and was given less than a year to live, Sadako began to fold paper cranes, in accordance with the Japanese tradition that says if one makes a string of a thousand paper cranes, a wish will be granted.

Though Sadako succumbed to the disease, her wish for peace -- so that other children would not have to suffer as she had, lives on at this Children's Peace Monument where strings of paper cranes made by children all over the world are displayed and continually replaced as they disintegrate in the elements.

how to make a paper crane