Pleasant Pictures from Another Time

My niece Amelia, knowing my interest in almost everything, sent me these pictures along with my Christmas present. I don't know where she got them so I'm free to imagine . . . 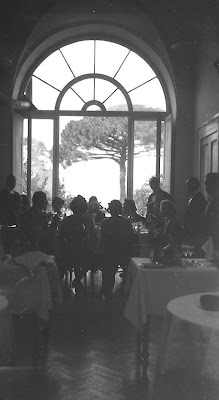 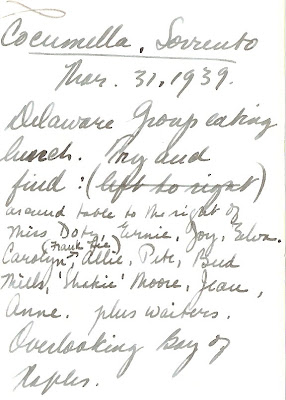 'The Delaware Group' in Italy, March 1939. The beautiful Palladian window and the pines just beyond are what I'd expect 'overlooking the Bay of Naples.' Idyllic! I wish I knew what they were having for lunch. 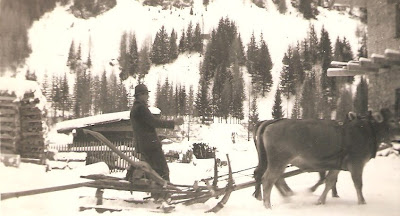 Here's a December 29, 1938 tourist shot from St. Anton am Arlberg -- an Austrian ski resort both then and now. And below (12/27/38) Robert Egli in the main street of St. Anton -- quite a dude and undoubtedly a heartbreaker.

The two women are Clara Louise and Anne Taylor -- part of that Delaware group, and this picture was from that same March day in Sorrento. 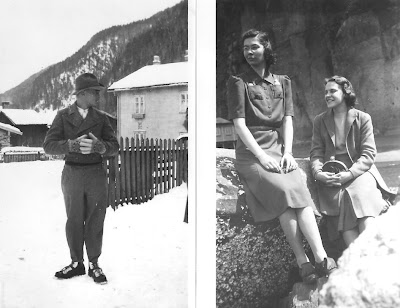 In 1938 and '39 the Great Depression is easing and things are cheaper for Americans in Europe than at home. So it's not surprising that folks who can afford it might make a protracted stay in the beauty spots of Austria and Italy.

Except . . . with the advantage of hindsight, it seems breathtakingly foolhardy. There was, after all, this guy called Adolf Hitler.

By December 1938 he has already annexed the Sudetenland (part of Czechoslovakia) with the compliance of the participants of the Munich Conference. He is making his plans for war while the English and Americans talk of 'peace in our time.'

In January 1939, months before the Delaware Group enjoys their ravioli overlooking the Bay of Naples, he has given a speech prophesying 'the annihilation of the Jewish race on Europe.'

Were there were rumblings and rumors of the coming horrors? Or, as is so easy to do, did these travelers simply feel that such unpleasantness couldn't touch them.

There's a story here, for sure.

I love old photos. It's kind of neat to look at the images and try to come up with stories to fit.

Vicki - I am enjoying a series of books by Jacqueline Winspear - Her Maisie Dobbs character lives in London after the Great War. It's a wonderful escape from present-day obsessions with iphones and ipods - just old fashioned mystery - without the gore of some present day mysteries (Goodweather excluded). I think you would like them.

Love the pictures.The one of the two women reminds me of one of my Mother and her friend setting on the edge of a fountain in 1945.
Women always look so neat and sophisticated in these era pictures!I reviewed Shiela Kay's book on my blog today.

I've got the Maisie Dobbs books on my list. England between the wars is a time I enjoy reading about -- Sayers, Christie, Thirkell to name three.