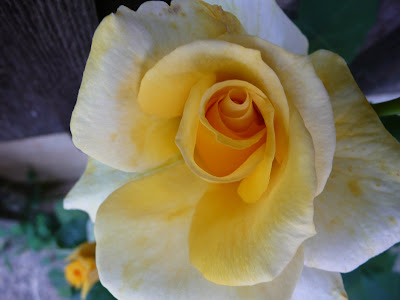 The chicks are at that awkward teenage stage -- not exactly cute anymore and full of attitude. If they could, they would probably have pimples and play loud music. They fly up and perch on top of the waterer and feeder, which, because of the poop problem, we have had to thwart by topping the tanks with cut-off milk jug tops. They pounce on bits of grass and dirt, scratching vigorously in search of bugs. When one finds a treasure, the others pursue her around the brooder, trying to steal it. 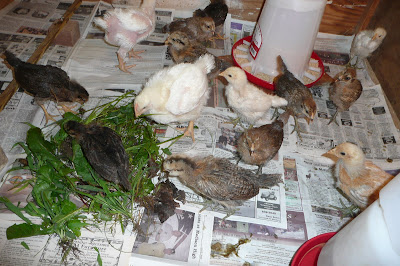 The two HUGE white chicks are Rock Cornish -- they're going to the person who ordered them next week when we get together for a chick swap. It's amazing how they have grown -- but that's what they're meant to do, being intended for the table. 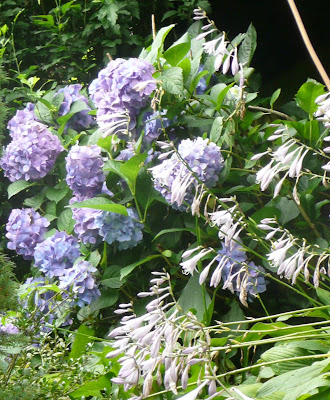 I'm still enjoying my clothesline --so much so that it inspired a little memory for Miss Birdie to talk about in the work in progress. I posted it on my monthly blog on Amazon, if you're interested.

A word about Amazon: I hope all of you know that I am a strong advocate for local independent bookstores -- always my first choice when telling folks where to buy my books. But my books are available on Amazon -- and I began a monthly blog there over two years ago and have met some nice folks through it. No pictures, and the posts are more formal, more like essays.

Can't wait to put up my clothesline. I'm hoping it will help save some money on the electric bill as well.

What are the best chickens to get for eggs? I don't plan on eating any chicken I get. I know me...they will probably all be named. I just want to have some laying hens one day.

Probably the very best layers are White Leghorns -- but they're not very interesting looking and they lay white eggs. Sex-Link or Rhode Island Red are good too -- and they lay brown eggs which I prefer, just for the aesthetics. I have Ameracaunas who lay blue-green eggs, and have been good steady layers too. (I'm hoping next year to get a few Marans -- their egg shells are deep brown. If you only want a few, often in the spring feed stores will have chicks for sale.

For fun and info, Google hatcheries or chicken tractors or raising chickens.

I love the way you write. You twist on the the commonest things bring a smile to my face, or reveal a haunting beauty that stays in my thoughts. So glad you decided to blog!
Tammy

Thanks, Tammy -- I find it kind of addictive because it helps me to focus on life as it goes on around me.