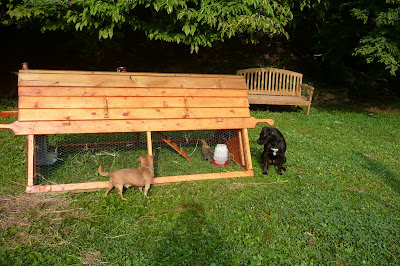 The chicks have moved (well, been moved, squawking and protesting) into their fancy new chicken tractor, built by my husband John. In the UK it's called a chicken ark and we first saw one in the side garden of a Stately Home (to which we had paid admission) in the Cotswolds a few years ago. We were entranced; John took pictures and we thought someday . . . 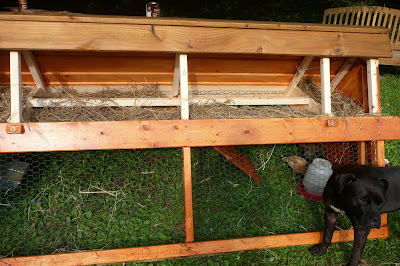 It's an elegant system for keeping chickens out of trouble and on green grass. They peck and scratch, eat bugs and green stuff, leave their droppings, and when the grassy spot has been thoroughly worked over, you move the tractor to another spot. (I have a tier in the garden where fat bugs of some sort -- maybe sowbugs -- have wiped out my squash and I'd love to put these biddies there.)

There's chick food and water and at night they can trundle up the ramp to the sleeping quarters (I've removed a panel so you can see) where there's a roost awaiting them. There are also nest boxes at either end when they get old enough to lay. 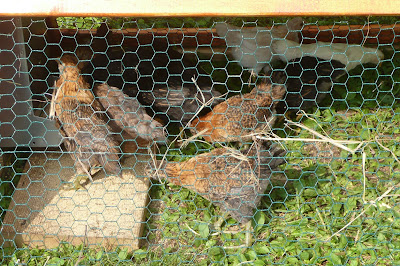 The chicks are happy to be out of the box and in more natural surroundings and Ali Ali seems to have decided that he's a chicken guard -- he's run off the other dogs when they've tried to investigate. 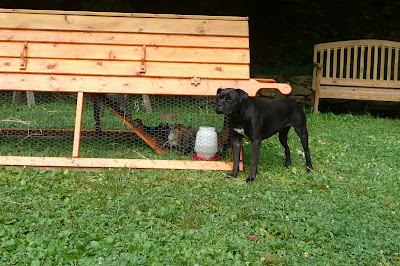 We still have the chicken house and the five old hens and Gregory Peck, the rooster. As these young pullets reach full size, we'll move some to the chicken yard -- 6 t0 8 is probably maximum capacity for the chicken tractor.

If you're interested in backyard chickens, this is a great solution. More and more communities are allowing chickens in backyards (not roosters, however.) There are any number of websites with plans and advice on chicken tractors. We even found a site where we could buy one just like the one we saw at the Stately Home -- for the stately price of about $1500 -- plus shipping from the UK.

This one looks just the same (John found the plans on the Internet), cost about $150 in materials (including the feeder and waterer), and features some small improvements. It's a lot fancier than it needs to be (here's a cheaper easier one) -- you can find plans for building a perfectly nice chicken tractor using recycled pallets -- but what a lovely addition to the garden of our stately home!

Vicki - I love this concept. I have been trying to convince my husband that we need chickens on Horse Knob. His concern was about coyotes and, of course, our own German Shepherds. This looks like a great solution - maybe I can borrow the plans from John one day. Thanks for sharing - love Ali Ali guarding the chicks!

We'll see how it goes. It will take a rather determined something to get into this coop but things do happen.

I've added some hot links in the last paragraph showing where the plans came from -- there's loads and loads of chicken related stuff on the internet.

My dream of having chickens is even closer to a reality now. I only want 6 maybe, if that many. I thought I would have to wait until we can manage to get the small bit of land behind our creek cleared so I could build a coop. But this is great. I could get one of those set up and "moving" around my yard. Then, when the land is cleared, I'll just have that much more space to move them around in. Thanks Vicki. Let's see my husband come up with a reason for me not to have chickens now. ;-)

We had something similar, but not quite as refinded, for our chicks, and our young weeder geese, years back on our farm. It is definitely a good way to go ... kinda keeps everyone happy.

Ali Ali looks like he takes his job quite seriously.

Plus, of course, the chickens will be loosening and fertilizing the soil, making it better for a garden spot.

Ali Ali operates on the simple premise that everyone and everything on the mountain is his.

Cats have much the same attitude as well.

(And sorry about the delete. My kingdom for an edit button.)

Susan B. and Liz -- if you're new to chickens, this is a fun little magazine -- Backyard Poultry.

Lots of useful info -- the only problem will be that it introduces you to so many gorgeous breeds, you'll want them all.

And one more thing! While our chicken tractor was not a particularly challenging design, in the interest of Full Disclosure, let me say that my husband is a skilled woodworker with a fairly complete woodworking shop. There are lots of other chicken tractor designs that are much simpler
and would work just fine. Google, as always, is your friend.

This just in from John.

This url is too long to fit the comment box. I'll go back and embed it in that last paragraph

Hey Vicki - What's the best breed for eggs? Or does it really matter?

Chris (my hubby) used to do some woodworking, and the many wonderful tools of that trade have been sitting in our dirt floor basement gathering dust and rust for quite some time. Maybe I can use the guilt about that to get my chicken tractor. (Ain't I so mean?!?) ;-)

Susan B. Re laying hens. White Leghorns are real egg machines -- that's what commercial farmers use for white eggs. I find tham a little blah in looks and usually opt for something more interesting. Often feed store will sell chicks in the spring -- sometimes Rhodes Island Reds (brown eggs) or Sex Links (so called because you can tell the sex of a chick by its markings. Also good layers.

Again, go online, do some research. There are lots of attractive chickens that are good layers. I like the Ameraucanas: good layers of blue-green eggs and they come in an assortment of colors.

Thanks Vicki. Hey, chickens as yard art. Who knew.

Wow....I'm so impressed. That looks exactly like some of the pictures of chicken tractors I downloaded from the internet and lusted, er, intently wanted awhile back. I mean the workmanship is wonderful! Not only useful, but a work of art. I built one once, and it was a sad little affair (basically a 1x 2 frame, with chicken wire stretched over it and tin roofing on one end of the triangle), although in my mind I wanted it to look like yours. It did it's job of raising a few hatchings, but I was kinda glad when it collapsed and I could hide it's remains! Right now, my chickens get to range over about 2 acres in the day, and then get put up in their house at night. I haven't had any trouble for several years, but that could change I know. They range around with the sheep for part of the day. Most of my parameter fences are like Ft. Knox, so that has helped. I still worry sometimes though!

I love the idea of having the chickens free to roam around but we tried it years ago and they immediately destroyed my flower beds,
pooped on the porch, and were a constant temptation to the dogs. Now, with 13 dogs and seven or so cats in our holler, plus a nearby fox family, there's just no way.

Since I had to fence the outside of the pastures to keep the sheepies safe, I opted to use the smaller mesh, so the chickens could also roam. It's worked out very well so far. (They help deplete the worm infestations and 'areate' the manure and ground as well) Now the two chickens that live in the yard are pesky, since I have to fence off bits and pieces of the garden to keep Sue out of them AND the breezeway. (She has the notion she is Ariel the collie's buddy and likes to hang out on their bed in the hall. That didn't work out so well, let me tell ya!). I can see where chickens would demolish your lovely gardens, and I'm sure they are quite happy and spoiled with their chickie lot in life. I sure do admire the new tractor though. :-)

We have an old building in the back yard that really isn't great for storage, and I thought about using that as a roosting house for chickens, adding a fenced in open area on the side and all. But, then there is the problem of them destroying all the grass in that spot. That plus the fact that some neighborhood cats love to hang out in the building once in a while.
Yeah, I think the chicken tractor/ark would be a much better choice. :}

My chicken yard was scratched to bare dirt thirty years ago -- I supplement the girls' diet with freshly pulled weeds and overgrown veggies in season and vegetable trimmings and table scraps. They've done fine. The chicken tractor is just a new experiment.

That's the way our chicken yard was, and 'my girls' would get so excited when I brought them garden leftovers and such. Talk about a bunch of clucking goin' on!!! In the 'off season' I would let them out to roam, and they were pretty good about staying in the general area and going back to their house towards dark.

Is it the beginning of a backyard movement? Clotheslines, chicken tractors . . . where will it all end?

Seriously though, with economic down turns and environmental concerns all around, it's nice to be able to take control of some little part of your life. (We're beginning to think about pigs again.)

Ooooh, LOVED raising pigs ... really such neat animals and what personalities!!! We always raised 2 ... one for us and usually a friend, or friends, would buy the other. Nothin' like your own pork in the freezer!!! YUM!!!

Yep, we always had two also -- always named Oscar and Mayer. We quit raising them when we couldn't count on freezing weather to butcher them. (We did it the old timey way -- at home. Even rendered lard. Did't ever make soap though.)

We'll have to find a nearby processor and figure out the transport if we try it again.

Lost me with the pigs. Wouldn't mind it except 1) no room and 2) I could never butcher them. They would end up as pets.

Vicki, there was a British show in the 70's called "Good Neighbors." (or "The Good Life" in Britain) It's about a family in the 'burbs' who quit the "normal" life and go completely self-sufficient. Sounds like we may be starting something like that here. :-) Well, except for my habit of making pets of the livestock. Not very farm-like I know.