Fun on the Farm

WARNING: Don't read this if you can't deal with the realities of farm life. It has a pretty good ending though.


"Are you having a great day?" asked the very perky girl behind the coffee bar in the grocery store. 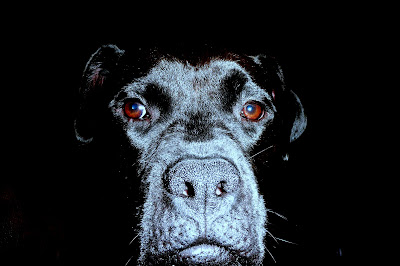 "Actually, no," I told her as I waited for the overpriced coffee slushee that was my self-bestowed award for making it thus far. "But it's improving." (The picture above of Justin's dog Ali Ali is meant to be a representation of my mood in the face of all that perkiness.)

So what was my problem? I'm posting this because some people see my life as a sort of pastoral idyll -- picking flowers and tomatoes, rocking on the porch, etc. And those good parts are what I generally talk about. But then there are days like today.

My younger son called early this morning to tell me there was a very young calf whose mother didn't seem to have any milk and whose rear end (Okay, Ann C., you'd better stop reading right now) was covered with maggots and some of the hair had been eaten off. My husband, who normally would deal with this, is out of town so I put aside my plans for writing and hoeing and headed down the hill to where the calf was.

I'll spare you all the details, which were pretty disgusting, but after hosing the baby off while Justin held her and making sure there were no wounds, I headed off for the farm supply store in search of some sort of fly repellent/ointment. And a bulb syringe. (Don't ask.)

No luck at the nearby store (twenty minutes away) so I went on to one farther (twenty more minutes) away. Here, no one in the store seemed to know much about cattle. I then went to a vet who shook his head and said just to use fly spray -- whatever it took to kill the maggots.

Back home once more to find the baby looking as if she felt better. She had nursed and Mama Cow's bag was full. So that had been a false alarm. Then, with the help of younger son and girlfriend, there was more hosing, flushing of rear orifices with cider vinegar and water, topical application of peroxide, finishing up with a Pepto Bismal pink ointment said to be antibiotic and fly repellent. Mama Cow anxious and having to be warded off; dogs fascinated, calf indignant, Vicki with tiny maggots crawling up her forearms.

The calf looks pretty awful but I know she feels better. Here's a picture of her mama licking her nose after the ordeal. The pink is the ointment. 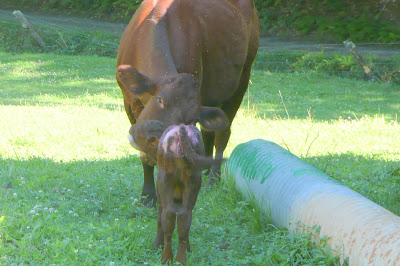 And here, in the foreground is the calf we were bottle-feeding -- now weaned and eating grass and calf feed. 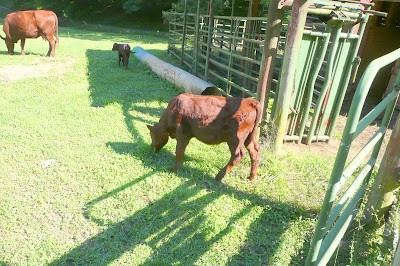 Not the day I'd planned -- but the day I got. Could have been worse.

Kind of nice to know your days aren't all skipping through wildflowers, spinning around singing about the hills being alive, etc. ;-)

Glad to hear it all turned out good in the end. Sometimes it takes all the 'guts' a person's got to get 'er done. Folks have no idea what troubles can happen to livestock, unless you keep them. There are times when all I can do is shake my head, and wonder how or what caused this or that. Always a dark side to the farm business, and I tend to leave allot of that off my blog too. Not sure why, but I hate to dwell in the bad places, I guess.
That is one cute calf anyway, pink bottom and all! What kind of cows are those again? I stopped at the grocery store coffee shop Friday for a special treat myself, and left laughing. Only at Starbucks in podunk city would you hear the cashier relating his story of trying to get his heifer calf into a stock trailer...;-)
Tammy

The breed is Beef Devons -- they're derived from Milking Devons which were the breed that came over with the Pilgrim Fathers (and Mothers.)

Having lived 55 years on a farm, I relate to problems with cattle and horses. Some would never think a woman would be doing what you did, Vicki, but those of us who are "country people" know that women do what they have to do. I have strung barbed wire fence, milked a herd of dairy cattle when I was twelve when my brothers were away at National Guard Camp, and I've killed snakes in my yard with a pistol. I've given shots to my animals and held them while they died cause my husband couldn't take it.
But I've never cleaned the rear end of a calf loaded with maggots. My hat is off to you, Vicki.

The nice thing is realizing that you can always wash it off, whatever "it" is -- a lesson I actually learned with my first child -- pre farm.

Hats off to you Vicki!!! Although it was years back for me, been there/done that, and yep, most folks don't realize just what all goes on with farming, day to day, 24/7. My husband worked 2nd shift back then, so yes, some of the 'no fun' responsibilities fell into my lap ... ugh ... but I did what I had to do and even surprised myself sometimes.

Glad to hear all turned out ok and your other calf really seems to be thriving.

The funny (well, odd) thing is the regularity with which these events occur when my husband is out of town.

It used to be that his pulling out of the driveway was the signal for the cattle to break out and go wandering down the other side of the mountain -- so much so that a friend in Tampa once, on hearing that John was out of town, had her prayer group pray that the cows wouldn't get out. And they didn't, not that time!

Vicki - It still sounds like a pastoral idyll to me! LOL! The way I look at it once you've had babies nothing seems that daunting ever again. Glad the baby is doing well.

The baby is doing very well. We cornered her again this morning and the maggots were all gone! Reapplied the pink ointment and left mama and baby to enjoy the rest of the day unmolested.

Of course it seemed to me that animals, and children alike, seem to get sick or do ornary things in the evening, and like you said Vicki, as the husband drives out the drive that's when everything starts to happen. Sometimes I just wondered if they all weren't watching and then it was like, "OK, now let's loose!!!" Now I can laugh about it, but at the time I was stressed ... goodness sakes. HAHAHA!!!

Forgot to mention: I love the picture of Ali. That would make a great desktop wallpaper.