My friend Peggy had ten pink and green Log Cabin blocks pieced by her late mother. She wanted to use these blocks as the foundation for a quilt but there was no more of the material her mother had used -- and besides, pink and green weren't really the right colors for what she had in mind. So Peggy made several more sets of blocks in the fabrics she wanted to use -- picking up the pinks and greens but pushing the overall scheme toward golds and burgundies.

Some time back I had promised Peggy I would help her find a layout pattern for these diverse elements, so yesterday afternoon we pushed back the living room furniture and tried to make some sense of what she had. 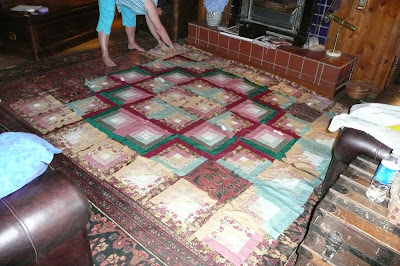 Peggy wanted the blocks from her mother to be an important element in the quilt -- to be together rather than scattered around -- so we decided to use them as a center medallion. It will mean picking out a few strips and replacing them with dark green but Peggy is nothing if not game. Next a set of blocks with burgundy strips was called into play to make the center of the medallion -- a few more strips to replace in order to get the pattern. 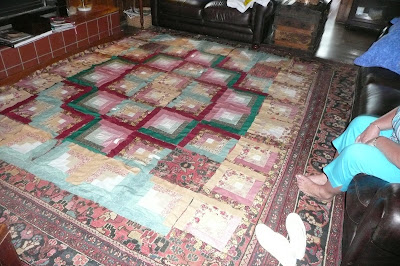 We sit and study the blocks. There are three yet to piece and those strips to replace but it begins to look like a plan. We climb the stairs and look down on the pattern. Not bad at all considering there wasn't a real plan to begin with. The center medallion shows up; the sides actually make a pattern; only the top and bottom rows are a little weak. It would have been nice it there were more of those gold and aqua blocks. But, with luck, a little rearrangement will bring things together. 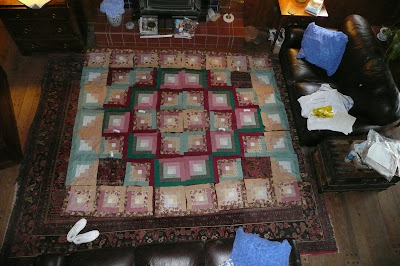 Not for the first time, I am struck by how writing a novel is like planning a quilt --all those different elements to be reconciled into a harmonious whole. If I have (as I do) a chapter from Calven's point of view in the first part of the book, I'd better have several more at equal intervals throughout. The same with Myrna Louise. But it's Birdie's book and her parts, like the central medallion, have to be the most important.
And what about that ending? Is it a part of the pattern?

I cut and paste paragraphs and scenes and chapters, moving them about till the pattern makes sense.

What a wonderful analogy for writing. It strikes me that it's an analogy for life as well as we search for meaning and patterns, changing the order and sequence of our activities, moving into relationships, some consistent and lasting, others fleeting, until we find or refine or find yet again the patterns and purposes that make us whole.

Thanks you, Vicki and commenters, for making this the one blog that I check just about every day, for both the soul refreshing pictures and the wise commentary.

The ding of the email awakened me as I dozed, head drooping over my laptop where I am attempting to stitch together Miss Birdie's story.

Thank you, Lynne, for the kind words. And I agree about the commentary -- first rate, including yours!

Vicki, this entry is yet another example of synchronicity! For years I've had two quilt tops pieced by my grandmother, the one from Dahlonega, who died when I was young. I kept thinking I'd find someone to turn them into real quilts, but they lay atop my little unused loom until a month ago when I learned that a friend, the wonderful poet Diane Gilliam, is now doing quilting to make a living. If you have not read her Kettle Bottom, you must. It might even feed into Miss Birdie's voice. I have a copy I can send!

Quilting to make a living? In my experience, except for a very few quilter/fiber artist types, quilting for a living is right up there with writing in being ill-paid.

I'd love to read Kettle Bottom.