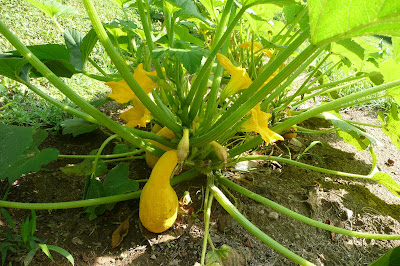 The garden is starting to 'come in,' as we say around here. The squash are already getting away from me and I've consigned several lunkers to the chickens -- I mean, there's only so much zucchini bread up with which my family will put. But some of these young ones appeared tonight, stuffed with breadcrumbs and onions and topped with bacon (for extra flavor, as we prefer it.) 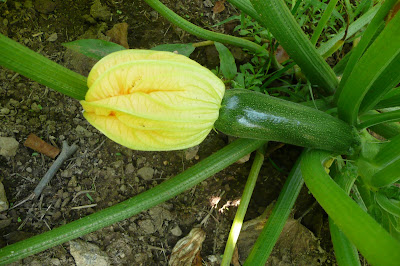 The first almost-ripe tomato has me dreaming of fresh mozzarella and basil -- or BLTs. (There's that bacon again.) 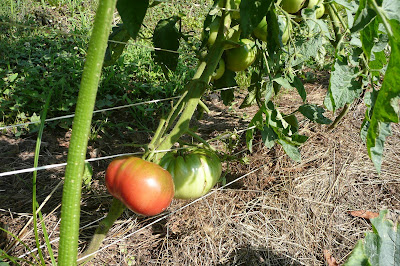 In spite of clear evidence that deer have eaten the tops off many bean plants, there was a nice mess of thin young Blue Lakes for dinner (Miss Birdie would be appalled at how young I pick them -- no 'bean' to them a-tall!)

And there was lettuce, a few asparagi (time to quit cutting these and let them build their strength for next year,) a green pepper, basil, and three beautiful, long cucumbers to complete my morning harvest. 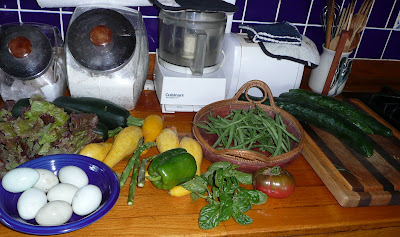 "A garden is a lovesome thing, God wot" said Thomas Edward Brown, in his poem "My Garden" and so it is -- especially in this early stage.

I was checking this quote in my Bartlett's when, just above it I found a small series of garden-related lines from Charles Dudley Warner's My Summer in a Garden (1870).

The progression of his sentiments is revealing.

"To own a bit of ground, to scratch it with a hoe, to plant seeds and watch the renewal of life -- this is the commonest delight of the race, the most satisfactory thing a man can do.

By the third week, he had made a discovery:

"What a man needs in gardening is a cast-iron back, with a hinge in it."

And by the sixteenth week:

"The thing generally raised on city land is taxes."

I think I detect a growing sense of disillusionment -- I know, from my own experience, that there will come a time in late summer when, though the garden is still offering a few stunted tomatoes and the peppers are thriving, for the most part it's bug-eaten, weedy and blighted. That's when I'll begin to think fondly of a killing frost

I also like to pick my beans 'young', and that's exactly what I did this morning ... 5 lbs worth are now worked up and in the freezer.

I am also overrun with zucchini and yellow squash, but still have many folks that are anxious for any extras.

My tomatoes are still oh so green, no signs of turning. UGH!!! My lettuce has bolted so I yanked it out today. Peppers, green and hot, are coming along nicely as are the cucumbers.

Every day I say, "Nope, not even going near the garden today", but then that always changes and I find treasures, or weeds, and there goes my time, and people always ask me if I'm bored living in the country!!!

People have always asked "Don't you get bored way out here?" -- and for the past 32 years I've always answered, "Not yet!"

Many years ago, I grew a small garden at the house my hubby and I rented when we moved to the mountains. My best crop was the potatoes, and I had the best time digging them up. I think next year, I'll plant some again. Getting your hands down in the dirt is the best part of it all.

"There can be no other occupation like gardening in which, if you were to creep up behind someone at their work, you would find them smiling." ~Mirabel Osler

We used to plant a whole field of potatoes back when we still had mules. At harvest time, using one mule and a bull-tongue plow, my husband would break open the rows and the potatoes would tumble out. Then the boys and I and whoever else was around would have a glorious sort of Easter egg hunt.

I especially like the picture of your 'bounty'. Are those eggs boiled and peeled or do you have white egg layers? Or gasp! Not store bought? :-) Would love to have some of that yellow squash. Gardens here are not quite there yet, and most definately not mine (I got everything planted late). I've noticed even if you find yellow squash here, it is tiny, tiny little things. Hopefully that will change soon. Thanks for sharing your bounty.
Tammy

Daughter and I like a bean called "Triomphe de Farcy." They are straight and skinny, and have to be picked while small. I tried them last year for the first time, and thought they had the best flavor. My "early row" this year was rather tough and stringy (a stretch of hot, dry weather was to blame, I'm sure) but a later row is better. Had some stir fried with my first squash and a sweet onion - pretty tasty!

And yes, the late summer garden is usually a weedy, blighted, depressing place!

Tammy, Those eggs are fresh from the chicken house -- well, I did rinse the poop and mud off them. They are a pale blue-green to olive -- the shades my Ameruacanas favor.

Phyllis, Triomphe de Farcy sounds like a filet bean I grew a while back -- as I recall it was delicious but I tended not to be vigilant enough -- miss one day picking and they got very stringy. Yeour stir fry sounds like a good ida for our supper tonight -- I just picked more beans and squash.